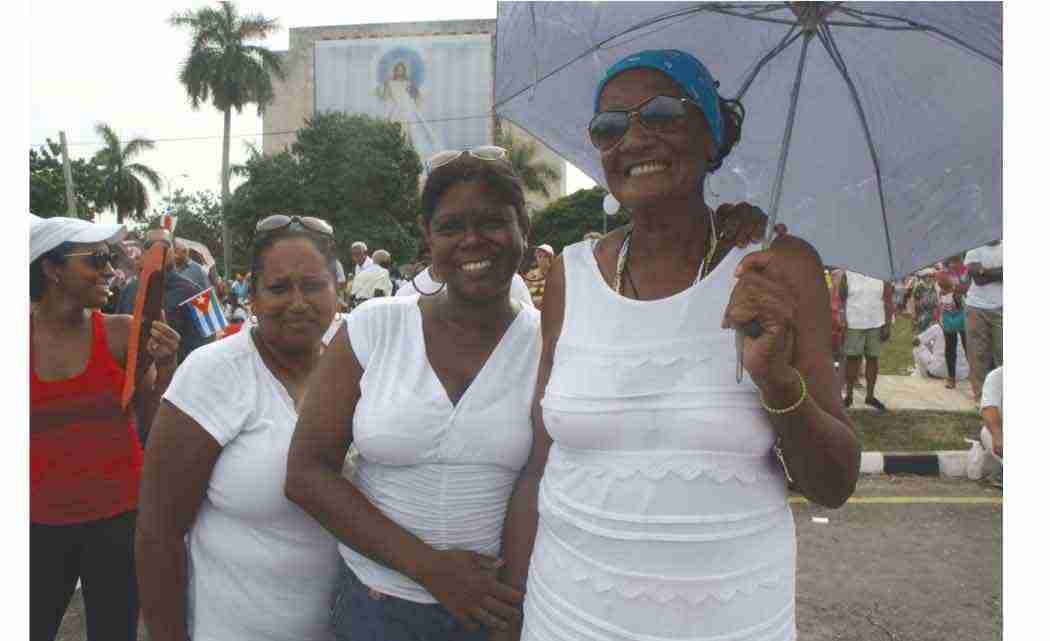 HAVANA, Cuba — When Mirta Garcia Hernandez heard Pope Francis was coming to Havana, she knew she had to be there.  “We belong to a Church group in my hometown of Los Palos which lies in the province of Mayabeque. We’re a group of friends and so we all got together to come to Havana. We left on a bus at midnight and got to the Plaza de la Revolucion at 4 in the morning, and we’ve been waiting for him just to catch a glimpse, even if it’s just for a second.   Just to be near his excellence and know we are under the same sky.  It is worth it. We have so much love we want to offer him.  It’s pure love so any sacrifice is not important, sweating, standing on our feet four hours, whatever we have to do is little, so little,” says Garcia smiling. Norma Antonia Borges Adan rode on the bus with Garcia from Malbeque.  Her impression of Pope Francis’ mass this morning was all about sweetness, love and caring but most of all peace. A peace, she says sadly, Cuba so desperately needs.

The province of Mayabeque,  lies about an hour and a half south of Havana.  Although the distance may not seem like much, for Garcia, it might as well have been the moon. For most Cubans, cars are very hard to come by and gas, even harder.  Juana Trinidad, Elsa Suarez and Angela Hernandez are from the province of Matanzas and also spent hours traveling to Havana.   “We are devoted to the Pope and he deserves homage.  We have been traveling all night by bus, in a caravan. He is divine, he comforts us and guides us to peace,” said Trinidad.

For some, like Elsa Suarez, the fact that Pope Francis speaks Spanish brings them closer to him.  “I am here because I am a Catholic and he is delivering a beautiful mass. The fact that he speaks Spanish is a blessing because we feel his words much more deeply,” says Suarez.

The feeling of oneness with Pope Francis is a sentiment that seems to be echoed around the world.  Sisters Alejandra Gutierrez and Tere Gutierrez are from Jalisco in Guadalajara, Mexico and came to Havana for the Papal visit. “We have many friends here in Cuba and they invited us and the truth is it is awesome to share this faith with all Cubans.  One of our missions was to bring written prayers from devotees in Mexico.  It is fantastic for Cuba, but our own country needs peace and prayer as well,” says Gutierrez.

Her sister, Tere Gutierrez , sees the Pope’s message as one of brotherhood.  “I think Pope Francis’ message invited us all to love one another in the same way, without worrying about race or religion. It’s seeing the face of Jesus in one another. He is an Evangelic pope, from the Evangelic Jesus. Love everyone. That’s the message that was reinforced today. He gives us hope.”

According to numbers stipulated by The Vatican, some 200,000 people congregated at the Plaza de la Revolucion on Sunday. The island of Cuba has seen three Papal visits in the past seventeen years:  Pope Benedict in 2012 ,  Pope John Paul II in 1998 and the recent visit by Pope Francis, which registered  the largest turnout in the history of the liturgy on the island.

Elsa Norris Perez says she practices Yoruba, an Afro-Cuban religion where believers worship saints, although God is the highest deity.  Perez says she finds it hard to put into words what Cubans find so appealing about this particular Pope. “I can’t tell you what it is. He has something that attracts us. He is very cheerful, happy, like us Cubans.  He is a friend of the poor. We feel he is one of us.”