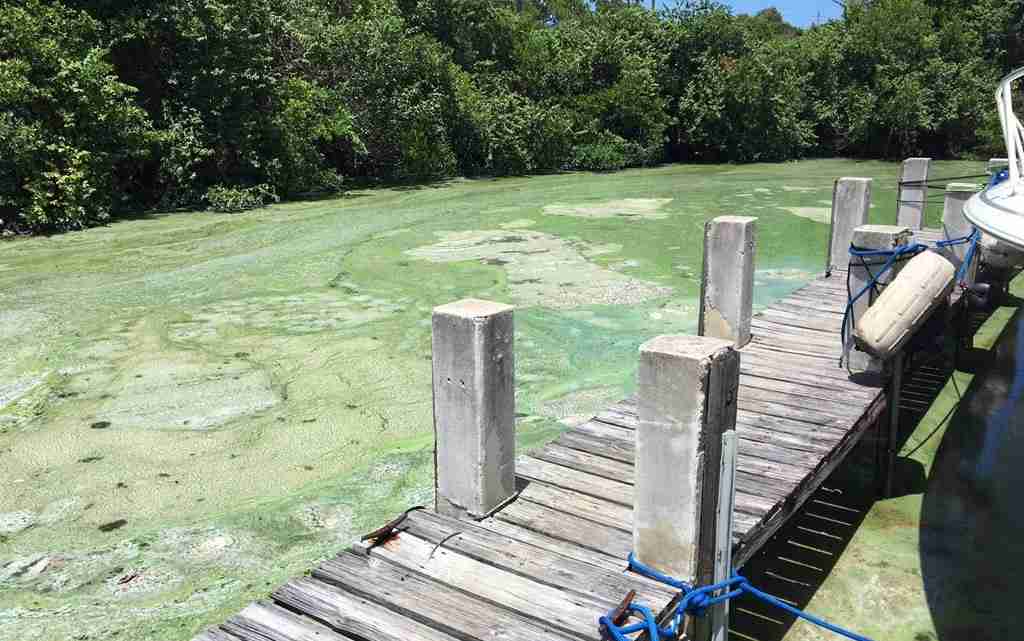 STUART – The enormous algae outbreak that has coated swaths of Florida’s St. Lucie River with guacamole-like sludge is a man-made affliction, arising from political and economic decisions made over the past 140 years.

Chasing dollars, Florida land developers and their government allies broke up nature’s flow that used rivers, Lake Okeechobee and the Everglades to move water south from central Florida to the Florida Bay at the peninsula’s tip. That spurred Florida’s economic growth, but it came with a price: Rivers and lagoons have periodically become so toxic with green and brown slime that fish die off, residents are sickened and tourists stay away.

The algae-laden runoff flowing down rivers and estuaries after this year’s heavy winter rains has hit especially hard along the St. Lucie River nearing the heavily populated Atlantic beaches.

It’s an oft-recurring problem. Yet joint federal and state projects agreed upon in 2000 by former Democratic President Bill Clinton and then-Republican Gov. Jeb Bush have been slow to materialize amid tight budgets and political opposition.

It’s complicated, but the simple answer is humans. From the late 1800s well into the 1900s, business interests with government cooperation sought to drain the Everglades so land could be developed. Water that naturally flowed south from Lake Okeechobee through the Everglades to Florida Bay was diverted east and west into the St. Lucie and Caloosahatchee rivers and out to sea.

Around the lake, farms, ranches and homes sprang up, producing human and animal waste and fertilizer, all laden with phosphorus and nitrogen that fast-reproducing algae feast upon. Florida’s heavy seasonal rains wash the pollutants into the lake and slow-moving rivers, prompting massive blooms almost annually in Florida’s summer heat.

What are the outbreaks’ consequences?

Environmental, health and economic. Outbreaks kill fish and other plants by sucking oxygen from the water and releasing toxins. Toxins in the food chain can kill birds, reptiles and mammals. Humans fall sick by touching or breathing toxins. Boaters, fishermen and beachgoers stay away as waters look and smell rancid.

What are the short-term solutions?

The U.S. Army Corps of Engineers and the South Florida Water Management District, which control much of the flow through levees and gates, are holding more water north of Lake Okeechobee and sending less water into the rivers. That has alleviated the immediate outbreak, at least in the river. An algae bloom in the lake covers 200 square miles.

What about long-term solutions?

Scott also wants federal authorities to expedite an $880 million project strengthening a dike which surrounds Lake Okeechobee, controlling its water flow. The 18-year project is scheduled for completion in 2025; Scott wants it done faster. Democrats and Republicans are at odds over who’s to blame for not allocating extra money.

John Campbell, a Corps spokesman, said even with expedited funding, it’s unclear how much faster the project could be completed – given there are only so many qualified contractors to do the work.

What are environmental groups proposing?

Some environmentalists say nature has the best solution: Let the water flow south into the Everglades as it did before man intervened. That’s what was proposed in the then-$7.8 billion pact Clinton and Bush negotiated 16 years ago.

To achieve that end, retention reservoirs covering 90 square miles would be built south of Lake Okeechobee. Supporters say the water could be cleaned of phosphorus, nitrogen and other pollutants before releasing it into the Everglades. They say that also would improve the health of Florida Bay, which lost seagrass when dwindling freshwater turned the bay water too salty.

No. Brian LaPointe, an algae researcher at Florida Atlantic University’s Harbor Branch Oceanographic Institute, said scrubbing the water of so much nitrogen would be nearly impossible. Besides, nitrogen-laden water would be a disaster for the Florida Bay, its seagrass and its coral, he said. Instead, he recommends reducing the amount of nutrients that farmers, ranchers and residents near the lake leech into the water.

Could the reservoir plan be enacted?

That’s doubtful in the current political climate. The plan would require buying land owned by powerful cane growers U.S. Sugar Corp. and Florida Crystals. U.S. Sugar struck a deal in 2008 to sell 300 square miles of land to the state for $1.7 billion, but Florida’s economy tanked, the state ran low on money, legislators balked and the company changed its mind. Only 42 square miles were purchased for $197 million.

Next post Nonprofits can be bridge to unite all our communities