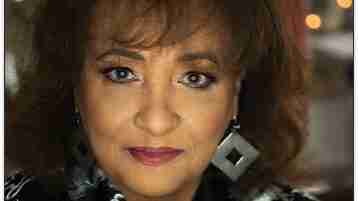 Daphne Maxwell Reid had the difficult task of replacing Janet Hubert as “Aunt Viv” on the hit ’90s sitcom “The Fresh Prince of Bel Air.” It’s always difficult to replace a character that has its own fan base. Maxwell Reid was able to capture the momentum without missing a beat. Aunt Viv is coming back at Thanksgiving for the show’s 30th reunion, airing on HBO Max.

“Fresh Prince” was among the most powerful sitcoms of its time, especially to African American families who saw a family’s smart anfd funny members without the stereotypes that chased black characters on other shows. The rollercoaster of smiles, laughter, and tears was predictable and joyous. Will Smith’s production company, Overbrook Entertainment, is bringing the cast back together for this special reunion. The special promises to be stacked with memorable stories, surprise guests and lots of laughs.

Daphne had to remain tight-lipped about the plot and the format, but Zenger managed to squeeze some information out of her about what fans will see.

Zenger: How have you been coping with all this Covid crap?

Daphne Maxwell Reid: It’s been fine. I’m used to being by myself because I create. You create in your environment, and I have a nice environment, so I’ve been great!

Zenger: Thanksgiving was already my favorite holiday. HBO Max made it that much more special. That’s when we’ll get to see this “Fresh Prince of Bel Air”30-year reunion show.

Maxwell Reid: You are going to love that show. We all had so much fun.

Zenger: Tell us about it.

Maxwell Reid: I can’t tell you much about it. It’s a nice surprise.

Zenger: Dang, I tried to slip that one in on you. A little tidbit.

Maxwell Reid: We’re all there. That’s my tidbit. We have surprise guests. We had so much fun. We heard things . . . some of the cast told stories of what was happening behind the scenes that we had never heard. There was lots of information gathering and sharing. It was great. And being in L.A. for a week, on somebody else’s dime, in the Beverly Hills Hotel ain’t a bad way to spend 6-days.

Zenger: Does it feel like 30 years to you? Because when I saw that I had to look it up to make sure it wasn’t a typo.

Maxwell Reid: As you get older time goes very quickly. And 30 years—well, I’ve been in the business for almost 50 years, so 30 years is just, “Okay, that was just another season.” That was the beginning of it. I’m only a ‘27 yearer.’”

Today is exactly 30 YEARS since The @FreshPrince of Bel-Air debuted! So we’re doin’ something for y’all… a for real Banks Family Reunion is comin’ soon to @HBOmax! RIP James. #FreshPrince30th

Zenger: No ma’am. We’re counting on you for all 30. You were a part of something special.

Maxwell Reid: I’ll take it. I’ll take all the love I can get.

Zenger: How did this even become an idea, or a thing? Who contacted you [saying] that they were trying to put this together?

Maxwell Reid: We got an email from Will’s production company asking if we would like to be a part of it. And we said, “Well yeah!” It was a lovely gesture on his part. It was well produced. During this Covid-19 it was precautions out the ying-yang. It was great. He did it top-shelf.

Zenger: It’s amazing the reaction that the reunion is getting, just off of a few still pictures that have surfaced on the Internet.

Maxwell Reid: That’s excellent. I have gathered a lot more followers on my Instagram because of it. It really has been blowing up. People are anxious to see where we are now and what we are doing. They want to see if we’ve been thriving. And I can understand during these times, they need to see some joyfulness. So, we hope to bring that joyfulness to you.

Zenger: I also think there is a need and love for nostalgia now. Especially now because there aren’t many long-lasting sitcoms. You guys represent that last wave that really produced a great sitcom.

Maxwell Reid: This is a time for remembering the good times, for sure.

Zenger: I know you all keep in touch with one another, but what was it like to see everyone again?

Maxwell Reid: We all do keep in touch, and we keep in touch often. I go to Comic-Cons with Tatyana [Ali] and Karyn [Parsons] on a regular basis. We all keep in touch with each other by phone in terms of what things are happening in our lives, and sharing things. It’s going to show you guys that we really are a close family. It’s rare. And I’ve been on lots and lots of series on television, and to tell you that this is the closest family that I have had on television, would be an understatement.

Zenger: What made this set, this group of people,x have that tight bond?

Maxwell Reid: Well this is one that was accepted by the public as an iconic representation at that time with those people. Will Smith has the charisma to bring the world to his doorstep. And he’s been able to hang on to that and grow with that. His growth from when he started this show and the position he was in as a musician and not an actor to this mogul with production companies and movie companies and movies. He has bloomed into the man that I thought he could be.

Zenger: It doesn’t hurt that he seems so genuine and down to earth as well. Being talented is one thing but being relatable can elevate your talent.

Maxwell Reid: Down home, just as regular, big hugs . . . questions about your family. I mean he is a genuinely nice person. And he’s only incumbered by his success. He has to be somewhat protective and I understand that. We don’t bug him. We know how busy he is. But we keep up with him, and we can get notes to him and sometimes we have lunch together. It’s a great relationship. I’m really proud of him. He understands that I’m proud of him and the growth that he has had. And I admire him. He’s quite the businessman and quite the down to earth successful person.

Zenger: The void on the reunion is James Avery. I know you can’t share much, but I’m sure we can expect a lot of “Uncle Phil” memories.

Zenger: What is your favorite episode of “The Fresh Prince of Bel Air”?

Maxwell Reid: Well, you know my favorite one is my first one! That was a really fun introduction to an awkward situation. And then I guess the one that I am most moved by is the one when Will’s father, Ben Vereen, leaves him again. It always gets me. They did a great job. And Will had some coaching from James Avery. James got him to feel it before he performed it and he stepped up to the plate.

Me and @djjazzyjeff released HOMEBASE 29 years ago today! Found these old pics from the summertime video shoot. @FreshPrince nostalgic vibes!

Zenger: Is this going to be the set of the sitcom reunion show, or just you guys sitting in a basic setting?

Zenger: Okay okay! I have to wait until November.

Maxwell Reid: Well, you saw the picture. So, that’s the setting.

Zenger: To have the attention of fans 30 years later, what does that say for the work you guys put into this show and the product that was produced?

Maxwell Reid: Honestly, it says that we produced something so classically appropriate, that we are now on our third generation of viewers. And it means that it can stand the test of time, and that it has not gotten stale. It’s just as invigorating and exciting to watch today as it was 30 years ago.

Zenger: What did you take away from the reunion show?

Maxwell Reid: My takeaway was that a family was established, and it still exists.

Zenger: They say a picture is worth a thousand words. They also say time heals all wounds. The picture of Will Smith and Janet Hubert (the original Aunt Viv) was a beautiful thing to see. Were you guys privy to their conversation?

Zenger: It is always an honor speaking with you. I cannot wait to see this reunion show and see you guys back together again. Is there anything else you would like to add before I let you go?

Maxwell Reid: Keep an eye on BET Plus the following week, December 1. I’m in a TV movie called “The Business of Christmas.”

Next post Girl Power: Rare Identical Triplets Born in Argentina Are Back Home