Deadpool is an interesting alternative to typical Marvel fare 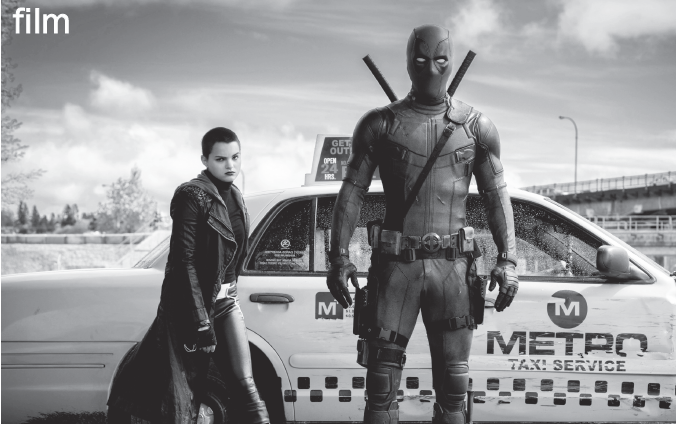 Ryan Reynolds and Marvel Entertainment are trying to atone for the stinker that is The Green Lantern. For those of you unfortunate enough to see it, it is the 2011 Marvel bomb that starred Reynolds in a tight green suit. The only good things that came out of that film was Reynolds’ off-screen marriage to co-star Blake Lively and their baby.

In the latest Marvel film to come out of the factory, Deadpool, a mercenary who finds out that he has stage four cancer in his brains, lungs, prostate, liver and undergoes a mutant mutation to cure himself. Only, in true comic book movie fashion, the mutation gives him superhuman powers that cause him to don a red suit and a mask.

Written by Rhett Reese and Paul Wernick (based on the character created by Rob Liefeld and Fabian Nicieza), Deadpool tries to do what Watchmen could not: give us an anti-hero we actually like. Deadpool is also lighter in tone and has a way better sense of humor; most of which comes from Reynolds’ trademark deadpan. And, having him break the fourth wall Zach Morris-style is genius. It makes the film funnier and more relatable.

Tim Miller, directing his first big budget film, really pushed the envelope with this one. The character Deadpool is irreverent and a bit of a horn dog, but the blood, guts, brains, decapitations, and full nudity shown in full color on screen is all Miller. Granted, we could watch an episode of Game of Thrones or Spartacus and see the same things, so I’m not sure we needed to see all of that. Sometimes less is more.

Compared to other Marvel origin films, the formula used to create this one is a lot more mouthy and defective. Actually, the Marvel formula is tossed out of the window and its dirty old uncle was left to devise the plot. Who else would come up with the idea of an anti-hero who has the hormones and the body of a teenage jock and his hooker girlfriend?
Reynolds’ Deadpool is quite an interesting character that you could even see yourself hanging out with him, if he wasn’t such a jerk. He probably wouldn’t hang out with anyone anyway, because he’s more focused on his two main goals: grab the mad scientist who messed up his body and save the girl. Oh wait, that sounds like Marvel without all of the existential waxing about what’s right and wrong with the world. Never mind. Deadpool doesn’t care.

But, what would Deadpool be without his friends? First up, the inclusion of two lesser known, yet seemingly misfit X-men: Do-gooder with a heart of steel Colossus (voiced by Stefan Kapicic) and broody teenager mutant Negasonic Teenage Warhead. Throughout the film, Deadpool makes hilarious references to the X-Men franchise and its cast and why they are nowhere in sight in the film.

Deadpool’s human sidekicks are also a band of misfits. First up is Al (Leslie Uggams) who is black, female, blind, old and has an affinity for building furniture from Ikea. Bar owner and best friend Weasel (T. J. Miller) aka the voice as Mucus in all of those Mucinex commercials. Lastly, Wayne’s girlfriend Vanessa (Morena Baccarin) who moonlights as a prostitute and a bartender is good at holding her own.

Oddly enough, the only characters more interesting than Deadpool’s odd band of sidekicks are his bitter enemies. Ed Skrein as Ajax is so bad that he’s good. And, Gina Carano finally makes her film comeback as Angel Dust, a woman who can kill you with one punch.

Clearly, Deadpool is not for kids or the faint of heart. But it does have a lot of heart and quite a bit of spunk for a Marvel film. I usually don’t like anti-hero movies because the hero is too dark for my tastes. But Deadpool manages to be a decent film. And Reynolds, who has finally redeemed himself from Green Lantern, makes the perfect Deadpool