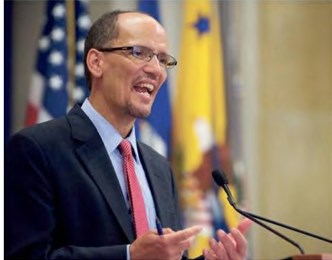 WASHINGTON —The Democratic National Committee is launching the first round of its “Organizing Corps,” a multimillion dollar program it says will ultimately train 1,000 college juniors as organizers for the party’s eventual nominee in key swing states.

There are 300 students in the first group across Arizona, Florida, Georgia, Michigan, North Carolina, Pennsylvania and Wisconsin—all states Democrats lost in 2016 where they say they can win in 2020. After a week-long training session in Atlanta, which starts Monday, the students will embed with their respective state parties for another seven weeks.

The DNC’s plan is to train 1,000 student organizers before the party chooses its presidential nominee, growing the crop of potential young talent within the party for the eventual nominee to call upon when staffing up.

“It could be a while until we know who the nominee is. Trying to ramp up from a staff of X to often 50X is often very difficult,” DNC Chairman Tom Perez told NBC News.

“Having a universe of 1,000 people ready to go — that is lightning in a bottle.”

More than three-quarters of the first wave of students are students of color, a reality that reflects the dual charge facing Democrats as they look to recover from an upset in 2016, when Census data shows black and Hispanic voting rates fell from 2012.

Rachel Haltom-Irwin, Organizing Corps’ executive director, highlighted that diversity, arguing that it will help organizers be more effective, especially since most of them either go to school or live in the states in which they’re working.

Perez argued that the party’s success in Wisconsin in 2018, flipping the governor’s mansion and holding Sen. Tammy Baldwin’s seat, was a function of an emphasis on learning the lessons from 2016 and focusing more on homegrown organizing that reflected communities better.

The fight for minority voters is hardly taking place in a vacuum — President Trump’s allies have pointed to low minority unemployment rates and the White House’s role in the criminal justice reform bill that passed last year as proof points of their ability to connect with black voters.

Perez panned team Trump’s attempts to woo minority voters, accusing the “far right” of using a “classic voter suppression tactic” when promoting the push to have minorities “#WalkAway” from the Democratic Party.

“We want to make sure they hear directly from us who is fighting for them, who has their back, and who has the knife in their back.”