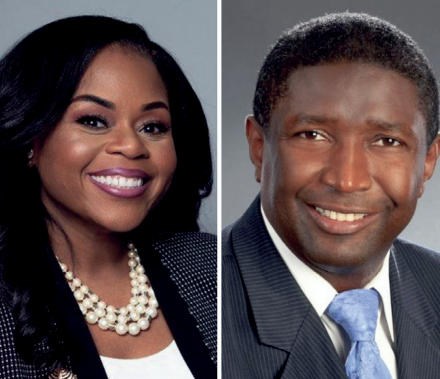 Tallahassee, Fla. (AP) — The Democratic primary to replace late Democratic U.S. Rep. Alcee Hastings was too close to call Tuesday night after most of the votes had been counted in the South.

With nearly 99% of the vote counted, fewer than 100 votes separated the two leaders in a ﬁeld of 11 Democrats. Broward County Commissioner Dale Holness and health care company CEO Sheila Cherﬁlus-McCormick led the crowded primary, each with nearly 24% of the vote. On Wednesday, Holness began to inch ahead of Cherﬁlus-McCormick.

Businessman Jason Mariner won the Republican primary, defeating Greg Musselwhite, but is considered a longshot to win the general election in the overwhelmingly Democratic district that includes parts of Broward and Palm Beach counties.

Democrat Patricia Robinson of Miramar said with such a large ﬁeld, it was a difﬁcult choice. She voted for Holness because she felt he will be more pragmatic in what he can achieve in a divided Congress.

“We really need true servants with realistic goals for the people to make things better for this country,” she said.

Turnout was about 16%. The district is more than 61% Democratic and about 13% Republican. In the 2020 election, Hastings earned 78.7% of the vote to defeat Republican Greg Musselwhite, whom Mariner defeated in this year’s primary.

Cherﬁlus-McCormick loaned her campaign more than $3.7 million and has far outspent the other Democrats in the race. Sharief was the secondhighest spender as of mid-October, with about $700,000 in expenditures.

Heading into Election Day, out of the more than 345,000 eligible primary voters, nearly 33,000 Democrats and more than 4,000 Republicans had already cast votes.

Republican Kevin Cerino, who voted for the GOP’s Mariner, readily acknowledged that the seat will “absolutely” go to the Democratic winner.

“It is what it is,” said Cerino, who didn’t sound enthusiastic about his choice. "Mariner seems to be slightly less of a clown than the other guy running. This kind of district that’s so overwhelmingly Democratic, you’re not going to get a quality candidate.”