DeSantis not returning cash to donor who calledObama N-word 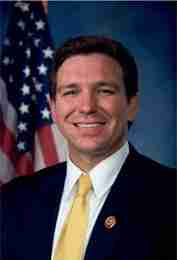 TALLAHASSEE, Fla. – Republican U.S. Rep. Ron DeSantis’ campaign for Florida governor said Thursday he will no longer accept money from a donor who used the N-word in a tweet about former President Barack Obama, but said contributions the donor’s company made won’t be returned because they were already spent on the primary.

Campaign spokesman Stephen Lawson said Thursday that money DeSantis and took from Steven Alembik’s company, SMA Communications, was spent before the Aug. 28 primary and the campaign hasn’t taken any money from him or SMA since DeSantis secured the GOP nomination to replace Republican Gov. Rick Scott.

The Democratic affiliated group American Bridge provided a screen shot of Alembik’s tweet, in which he used profanity to describe Obama as a Muslim Nword.

“We’ve said it before, we’ll say it again: we adamantly denounce this sort of disgusting rhetoric,” Lawson said in an email.

The campaign wasn’t sure why the money was returned, but said it was unrelated.

“He is in no way a vendor for us. He’s never done any work for us.

It’s not the first time race has come up as an issue in the campaign against Democratic Tallahassee Mayor Andrew Gillum, who is hoping to become Florida’s first black governor. The day after the primary, DeSantis said Florida voters shouldn’t “monkey this up” by supporting Gillum. Democrats immediately criticized the comment as racist.

“It is up to Congressman DeSantis to explain to Floridians why he has chosen to associate himself with right wing extremist groups and divisive individuals who want to pit us against one another,” the Gillum campaign said in an email.

Alembik didn’t take a call from The Associated Press on Thursday. Instead, Sean Jackson, chairman of the Black Republicans of South Florida, was handling calls for him.

Jackson said Alembik isn’t a racist and that he has a “plethora of black friends.”

He added that Alembik is Jewish, and he said he doesn’t “know too many racist Jews” because “they went through the same thing” as African Americans.

“The tweet has no relevance and it does not speak to the character of this man,” Jackson said.

Next post Echoes of Anita Hill in #MeToo allegation against Kavanaugh

Previous post "As is the mother, so is her daughter"