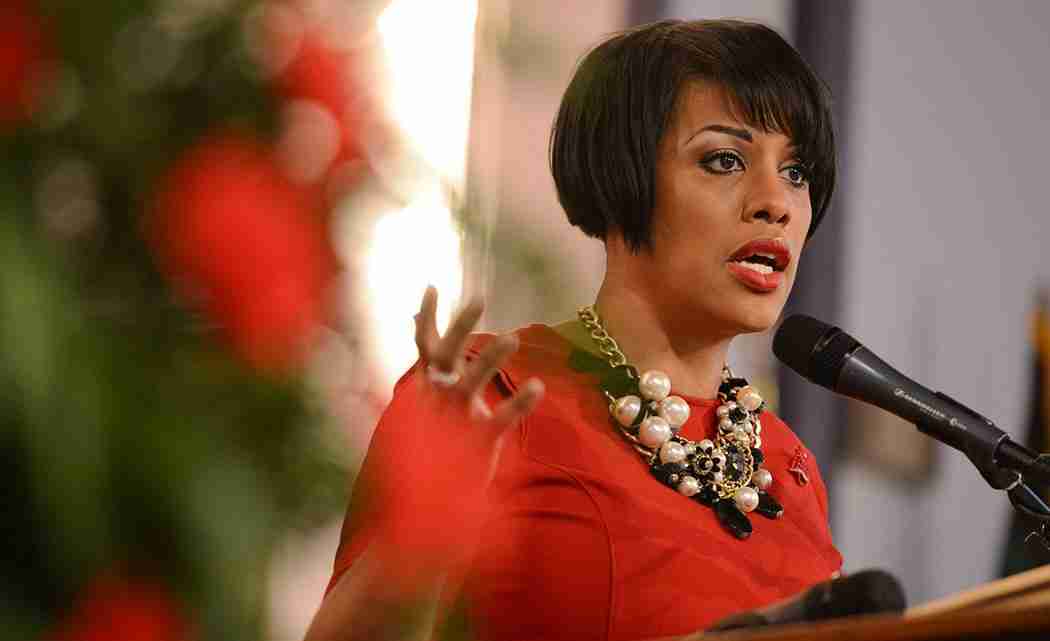 BALTIMORE — Baltimore Mayor Stephanie Rawlings-Blake is abandoning her re-election bid, dogged by critics who questioned whether she was fit to lead a city still reeling from a black man’s mysterious death from injuries received while in police custody.

The mayor of this majority black city, still 15 months away from Election Day, said at a news conference Friday that she wanted to focus on governing, not campaigning. Rawlings-Blake said she wanted to guide the city through a difficult time and pointed to her achievements: ethics reforms to combat fraud, reducing the city’s $100 million budget deficit by half, adding 12,000 jobs and demolishing more than 3,000 vacant structures.

Her five years in office have been marred in the months since Freddie Gray’s death, however. In April, the day of Gray’s funeral, rioters smashed windows, set fires and caused millions of dollars in damage. In the aftermath, the head of an already troubled police department was fired, with one of his deputies tapped to restore trust in the community.

Systemic issues, including racial inequality and economic disparity, became starker after festering for decades. And now, after reaching a $6.4 million settlement with Gray’s family, the prosecution of six officers charged in his death must continue.

“Many important decisions lie ahead, both from recovering from April’s unrest and managing our city through the multiple trials we have coming up,” said Rawlings-Blake, referring to the prosecution of the six officers charged in Gray’s death.

“The last thing I want is for every one of the decisions I make moving forward at a time when the city needs me the most to be questioned in the context of a political campaign.”

Rawlings-Blake has been a steady figure in Baltimore politics, serving on the City Council for 15 years before replacing former mayor Sheila Dixon, who was forced to resign in 2010 after pleading guilty to fraud. Dixon has announced that she will run next year.

During a news conference Friday, Rawlings-Blake acknowledged her approval ratings had “dipped” since April.

Some political analysts say she may have been able to pull off a win next year, especially because her numerous challengers would have likely split the vote among those who dislike her.

“She was still a favorite even though her performance, or the perception of her performance, had tarnished her,” said Donald Norris, a political science professor at the University of Maryland, Baltimore County. “In a four-way race, a person only needs 26 percent of the vote to win. This was her race to lose.”

However, abandoning her re-election bid precludes a potentially embarrassing loss to her predecessor, Dixon.

And the city’s problems have existed since long before Rawlings-Blake was in office and will take much longer than 15 months to fix, said Walter Ludwig, a Democratic political consultant who has worked on campaigns in Baltimore. Curing those ills will require a political regime willing to “sacrifice political capital to fix the things that need to be fixed,” he said.

The Rev. Ron Owens, a community leader in West Baltimore who planned Gray’s funeral, said the unrest, its aftermath and the political shake-up it has inspired is indicative of a sea change in Baltimore. Citizens, he said, are becoming more empowered, and elected officials are beginning to realize that they must face head-on the underlying issues that have divided Baltimore for generations.

“Freddie Gray has exposed a tale of two cities,” Owens said. “The City Fathers, who drive through an abandoned city to their glass towers, who were not impacted but enjoyed the tax dollars and developments of downtown; and Freddie Gray’s community, full of holes and deceit and poverty. People are now saying they’re not going to let downtown dictate uptown anymore.”

Owens said that although he would not have voted for Rawlings-Blake, she “showed dignity, class and commitment to the city’s future by stepping out.”

“She did the most selfless act done by any politician,” he added. “She would have won, but she wouldn’t have been able to govern in the meantime.”