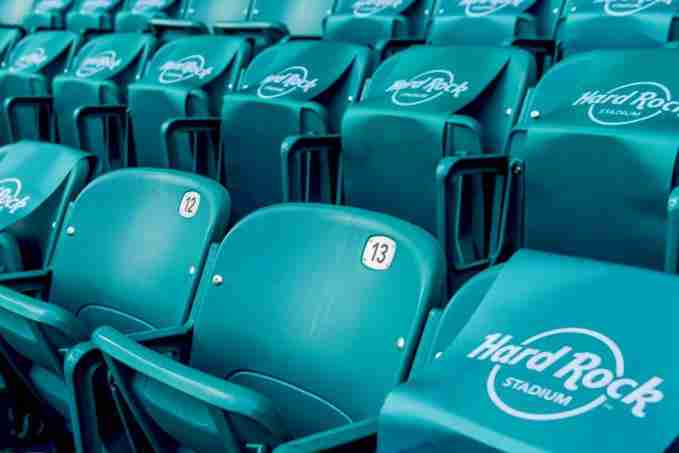 MIAMI – Miami Dolphins’ games sure are interesting this season! No tailgating. No Kiss Cam! No gorgeous cheerleaders on the sidelines. No crazy- acting fans tramping the stadium grounds.

It’s just different- like everything is different in 2020. And yes, blame it on COVID-19.

Who knew the NFL game day experience would take a sharp turn? But with a deadly, highly contagious virus plaguing the land, even the big- money, pro football industry was forced to comply and make drastic changes.

At the season home opener two weeks ago, it was a luminous sight wit many empty seats in the stands. The Dolphins’ organization opened Hard Rock Stadium to 13,000 fans, which is 20 percent of the usual. But 11,000 showed up. That means

Dolphins fans were either too scared to venture into the stadium or they felt there were too many restrictions. Tailgating is a huge part of the game day experience: the beer, the barbecue and the joshing around. But this season- none of that. You’re expected to enter the stadium, no mulling around, and head straight to your seat. Officers and security are plentiful and strict, so the crazy fan, with the crazy Dolphins paraphernalia, creating a funny scene, is largely missing in action! The usual over-the-top fan experience was ramped down a gazillion times at the first two home games.

But Dolphins’ brass say safety is first. It’s not their desire to diminish the fun, but the priority is to halt the spread of coronavirus. So, if they could give you pro football- albeit minimized- that’s what they’ve done. “When we started this process back in March of exploring what a socially- distanced stadium could look like, we made the health and safety of everyone the priority knowing that if we couldn’t make it safe, we simply wouldn’t have fans,” said Vice Chairman and CEO Tom Garfinkel. Once again this week’s fan allowance was 13,000 and over 12,000 showed up, not quite meeting the threshold.

One die-hard Dolphin fan wasn’t going to let the restrictions rain on his parade! He drove from Lakeland in his pickup truck, arrived at the stadium at 5am, many hours before gates opened, and was excited to be counted in the number. He did it for the season home opener against the Buffalo Bills and he did it all over again Sunday for the Seattle Seahawks game, which, by the way, had more fans in the stands, possibly because of Seattle superstar quarterback Russell Wilson. Nonetheless the Dolphins super fans are rolling with the coronavirus punches! And like this Lakeland fan, they’re okay with new protocols and a scaled-down experience.

Even the press hasn’t escaped drastic changes. The number of media attending the games is significantly smaller. No more media cafeteria and lounge, though they still feed the press with pick-upand go boxed meals. Inside the press booth, desk stations are socially distanced. Additionally, all press have to fill out a COVID questionnaire on game day and get temperature checks. Masks are required for anyone entering the stadium and officials strictly enforce the mandate.

NFL commissioner Roger Goodell issued a memo on Monday informing teams that video surveillance would now be used to assure teams and staff are wearing masks, this after some teams recently had a rash of positive cases.

On a sour note, the Dolphins lost to the Seattle Seahawks on Sunday, 23-31.