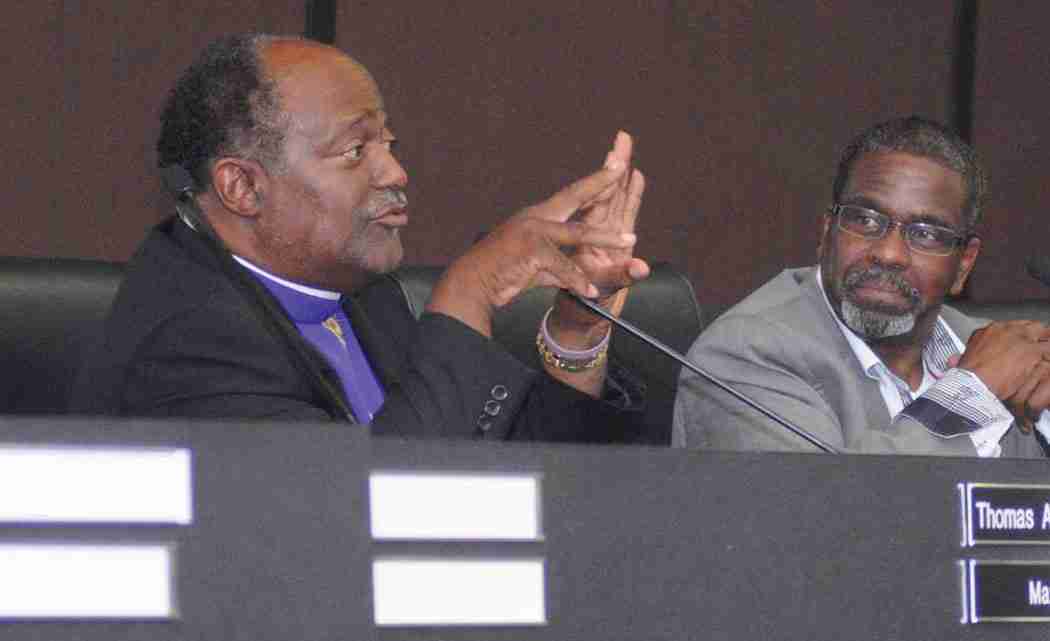 RIVIERA BEACH, FLa.— Mayor Thomas Masters of Riviera Beach attended the funeral of the late Clementa Pinckney, the state senator and pastor who tragically died amongst eight of his parishioners at the Mother Emanuel A.M.E church in Charleston, South Carolina last month. Killed at the hands of a mass gunman, Mayor Masters is determined to make something good of the horrific church tragedy.

“We may have to change the way we do church. We may have to re-think some church measures and procedures,” said Masters. So for the local churches in the area, he came up with the idea of a forum on church safety and security measures. The event was held last Friday, July 10, and was a huge benefit to many church leaders who packed the Riviera Beach council chambers to learn how to better protect themselves in the wake of the South Carolina church murders.

“You would not believe 15-20 years ago, that it would come to this intensity,” said Pastor Haywood Williams of the Victory Tabernacle of Prayer for All People Church in Riviera Beach. “It’s one thing to pray and be spiritual, but we also have to do some practical things. We have to have balance. I believe the Lord has called for us to be wise. There are some practical things that we could do to be vigilant and watchful to avoid such a tragedy.”

Sgt. Toney Williams of the Riviera Beach Police Department agreed and said he is willing to assist the churches to develop some measures of security. Williams cited that 75% of churches in the United States have no security measures in place. That needs to change, he said. He urged the churches to select a security leader, do a risk assessment and then implement a key security plan. Williams realizes that most church leaders don’t adequately know how to do those things, so he volunteered to help them. “I’m going to be a thorn in your side,” he told the church leaders. He wants to meet with them one-on-one to help them secure their houses of worship. “When you come to church, you tend to drop your guard because you feel safe,” he said, explaining the vulnerability of churches.

Deputy City Manager of Riviera Beach, Danny Jones, expressed that churches must avoid being an open target for those who want to do harm. “I think we’ve taken a giant step forward by opening this dialogue. It’s important to NOT be a target of opportunity. We have to have a plan so that church is not a place of opportunity,” Jones said. He spent a considerable time in working in law enforcement as well. He urged the clergy to think of the lay-out of their churches, and then devise a plan, even using surveillance or a security system.

Mayor Masters has partnered with Sam’s Club in West Palm Beach to provide HD surveillance cameras for the first 25 churches that come forward. Masters said Sam’s Club has made the cameras affordable for even small churches with smaller budgets. “Any church could afford this,” said Masters.

Robert Best, owner of Best Protective Services, said he would also be willing to work with the churches to provide security.

However, in addition to the mass murders in South Carolina, there have also been church fires under investigation in Florida, South Carolina, Georgia and Tennessee. Battalion chief Dwight Hudson of Riviera Beach Fire Rescue, was on hand to help the churches deal with arson. “Church arson is more prevalent than you think,” said Hudson. “The leading cause of church fires is arson. It’s impossible to completely eliminate the risk of arson, but you can take steps to reduce that risk,” he said. Hudson pointed out that churches are predictable, which makes them vulnerable to crime. “They know you’re going to be there for Bible Studies. We (churches) are a target.” Hudson urged clergy to utilize the professionals amongst their congregation. “Make use of your firemen, law enforcement and medical workers in your church. God gives you resources. We are willing and able to help. The fire department will gladly come to your church and do an assessment. We’ll gladly come out and help you,” he said.

Numerous pastors on hand expressed their appreciation for the forum and to Masters for sponsoring it. Pastor Bill Washington of Friendship Missionary Baptist Church in West Palm Beach, said he is grateful for the information. “It brings awareness that we are all vulnerable and that we should take precautions. Evil is real, so we have to be aware of that.”

Next post Attorney George F. Knox appointed to the Florida Bar Foundation board