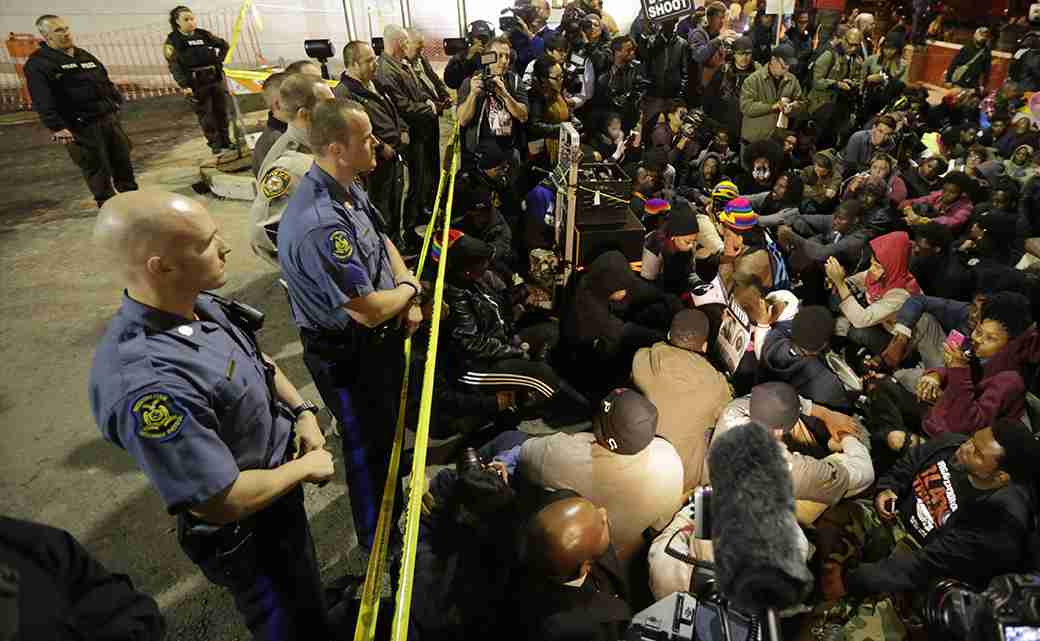 FERGUSON, Mo. (AP) – Police arrested dozens of protesters during the final of four days of rallies and civil disturbance to express anger at the fatal shooting of Michael Brown, a black 18-year-old, by a white police officer in a St. Louis suburb.

Organizers of the Ferguson October protests dubbed the day “Moral Monday” and committed acts of civil disobedience in and around St. Louis. More than 50 people were arrested.

Hundreds of protesters marched on Ferguson police headquarters where they stayed for almost four hours – despite torrential rain and tornado watches – to mark how long Brown’s body was left in a Ferguson street after he was killed.

Some protesters used a bullhorn to read the names of people killed by police nationwide. Christian, Jewish and Muslim clergy members – some of whom were among the first arrested – led a prayer service before marching to the police station two blocks away.

Protests have been common since Brown, who was unarmed, was killed by Darren Wilson on Aug. 9. Tensions escalated last week when a white police officer in St. Louis fatally shot another black 18-year-old, Vonderrit Myers Jr., who police say fired the first shots.

“My faith compels me to be here,” Bishop Wayne Smith of the Episcopal Diocese of Missouri said outside Ferguson police headquarters. “I want to show solidarity, and call attention to the structural racism of St. Louis.”

Protesters were met by about 40 officers in riot gear. Several clergy members approached individual officers and asked them to “repent” for Brown’s killing and other acts of violence. Some officers engaged the protesters, while others ignored the efforts.

“My heart feels that this has been going on too long,” Ferguson officer Ray Nabzdyk told the clergy. “We all stand in fault because we didn’t address this.”

Outside Emerson Electric headquarters in Ferguson, six people were arrested for failing to disperse after blocking a street, St. Louis County Police spokesman Brian Schellman said. Emerson is one of the region’s largest employers.

Among several other rallies, about 100 protesters blew whistles at St. Louis City Hall that echoed off the marble walls. Protest leader Kennard Williams presented a list of four demands to Jeff Rainford, chief of staff for Mayor Francis Slay. Slay was not in the office Monday.

The demands called for an end to participation in a program providing military equipment to police, body cameras for all officers, a civilian review board for police and mandatory independent investigations whenever police kill someone.

Rainford said St. Louis is not part of the militarization program; he promised the other demands would be taken seriously.

At the Edward Jones Dome, where the St. Louis Rams were playing the San Francisco 49ers Monday night, protesters briefly draped a banner over a Jumbotron video board that read “Rams fans know on and off the field black lives matter.”

Ferguson October began Friday with protesters marching to the St. Louis County prosecutor’s office and renewing calls for charges against Wilson. A grand jury is reviewing the case, and the U.S. Justice Department is conducting a civil rights investigation.

Next post JPMORGAN CEO SAYS MORE TO BE DONE ON CYBERATTACKS