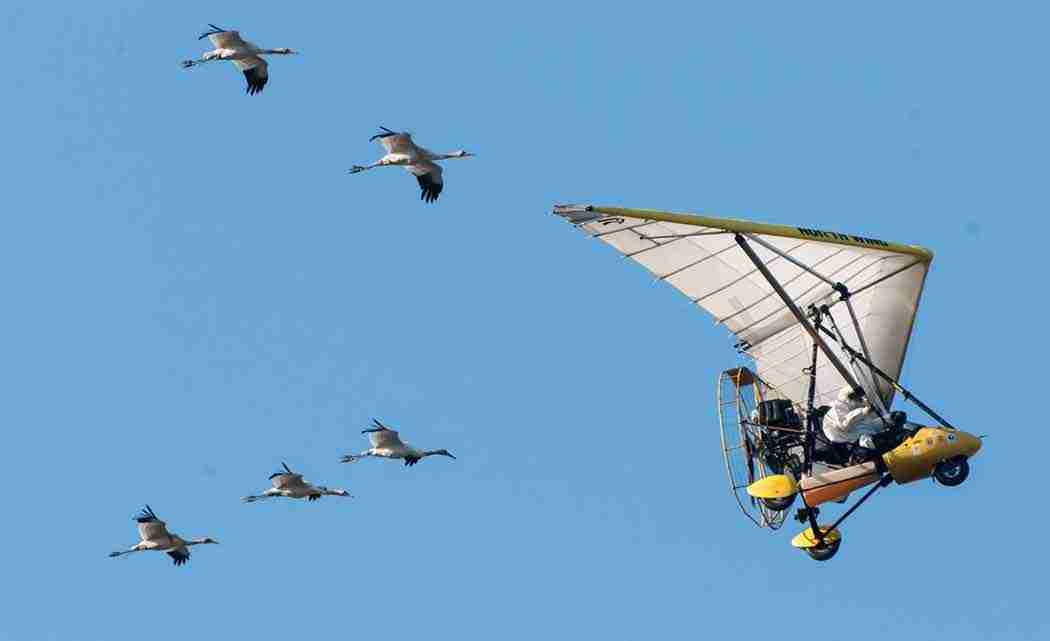 TALLAHASSEE, Fla. — Whooping cranes migrating south with the help of ultralight planes may have to start fending for themselves.

The U.S. Fish and Wildlife Service is recommending phasing out the use of ultralight aircraft that have been shepherding a reintroduced population of juvenile cranes to their southern wintering grounds, including the St. Marks National Wildlife Refuge along Florida’s Gulf coast.

An Oct. 15 USFWS report detailing the agency’s five-year plan for whooping cranes, says the use of the planes and humans costumed as cranes creates artificial conditions that eventually could make the birds less self-sustaining. The report, however, also notes the practice, started in 2001, has proven invaluable to maintaining the growing population.

The group that operates the 1,073-mile migration training flights, Operation Migration, says abandoning the program will leave the birds without the guidance once provided by their parents before the species was nearly killed off in the 1870s.

Operation Migration’s CEO and migration pilot Joe Duff said the ultralights have been the only method successful in reintroducing the birds to their natural patterns.

“They talk about artificiality that the ultralight method is the most artificial because (cranes) are with humans the longest,” Duff said from Northern Illinois. “We say it is the most natural because it replicates the process. We protect them as their parents would until they’re ready to be released.”

Since its inception, 250 cranes have been released into the Eastern Migratory Population. Ninety-five of them survive today and make up 27 mating pairs.

Juvenile cranes stay with their parents through their first year of life and don’t mate until they are 5 years old.

Duff said the ultralight program has not been around long enough to definitively say the cranes are negatively affected by the human help. He called the government’s recommendation to end it “speculation and not based on real science.”

The USFWS report says the use of ultralights is more artificial and costly than other methods “and does not appear to yield substantially better results.

“The Service supports minimizing anthropogenic (human generated) effects of captive rearing on whooping cranes by using methods that mimic the conditions experienced by wild whooping cranes as closely as practicable.”

Georgia Parham, USFWS public affairs specialist, said the recommendations come at a time when everyone is trying to establish a self-sustaining population in the eastern U.S.

They’re also not set in stone, she said. The recommendations will come before the nine organizations that make up the Whooping Crane Eastern Partnership in January.

“The efforts to put cranes on the landscape has been successful,” Parham said. “What we’re not seeing is reproduction. There is something in the method we’re using that is not giving cranes what they need.”

Alternatives include introducing juvenile cranes into populations preparing to migrate or allowing cranes to be raised by adult birds, not costumed humans.

“The bottom line here is that we want this project to succeed and we’re looking at methods and techniques that will lead to success,” Parham said.

However, the release of the report ahead of the scheduled January meeting also is drawing ire from Duff and other “Craniacs,” who say they should have been involved in the crafting of the working document before it was disclosed publicly. Now Operation Migration and others have to respond to the recommendations.

Duff said studies have shown the ultralight program has increased the survival rate of 1- and 5-year-old birds and helped mitigate a detrimental black fly population in breeding grounds in Necedah National Wildlife Refuge in Wisconsin.

“Now is not the time to end this and start some other ideas,” Duff said. “If you have other ideas, let’s test them on a small sample size, but to end this on the cusp of finding the answer is premature.”

Thousands of people flock to the St. Marks National Wildlife Refuge and Southwood in Tallahassee every year to see the cranes fly over and to view them in their wintering grounds.

Duff believes stopping the use of ultralight planes could put the kibosh on Sunshine State spectators getting a look at the rare birds.

“If we stop leading the birds,” he said, “they’re not going to make it to Florida.”