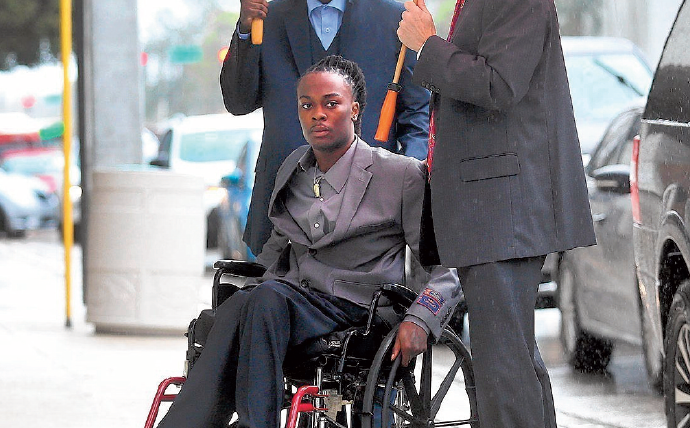 FORT LAUDERDALE, Fla. – A sheriff’s deputy had no legitimate reason to open fire when he shot and paralyzed an unarmed, young black man, a former police chief testified in a lawsuit Wednesday.

Lin did not perform a proper threat assessment while stopping Stephens for riding his bicycle into traffic, said Tucker, who was in law enforcement for about 25 years before becoming a police consultant.

Lin failed to notice that Stephens was talking on a cellphone that he held in his right hand, did not appear agitated and followed instructions once he was stopped, Tucker said. He said that if Lin felt threatened, he should have kept the car Stephens was standing behind between him and Stephens instead of walking up to Stephens.

Lin has said in depositions that Stephens began to raise his hands as ordered, but then moved his hands down and put his left hand behind his back, bringing out a dark object that he believed was a gun. He said he then fired four shots into Stephens.

A video taken by the dashboard camera in Lin’s patrol car doesn’t capture the two seconds before the shooting, but shows Stephens’ left hand was empty and the cellphone in his right.

“There was no clear or reasonable information that would lead officer Lin to believe that Dontrell Stephens had a firearm and was bringing it up to shoot him,” Tucker said.

Tucker also addressed Lin’s military-style uniform. Stephens’ attorney Jack Scarola has said that out of about 50 Palm Beach County deputies on community patrol, Lin was one of only a few who wore fatigues, jack boots, a flak jacket, bandoliers filled with ammunition and a stun gun strapped across his chest and his 9 mm service weapon in a leg holster.

Tucker said there was no reason for Lin to be dressed like that as his job was to get the community to trust him, not be scared of him. He said it’s been over 20 years since a law enforcement agent has been fatally shot in Palm Beach County.

He said that police chiefs and sheriffs are warned to be aware of officers and deputies who overdress because that can be a sign of “unreasonable fear of physical harm.”

“That unreasonable fear can result in some very bad decisions,” Tucker said.

Tucker was set to be cross-examined by Lin’s attorneys later Wednesday.