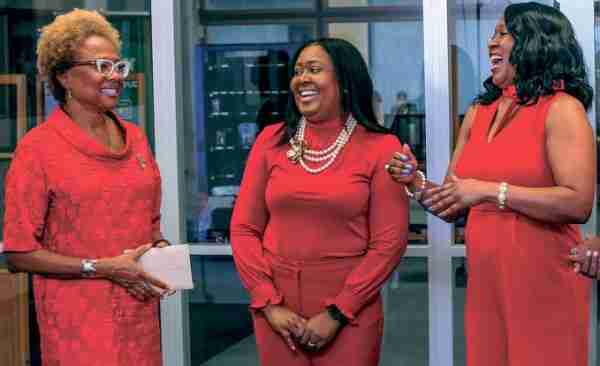 Palm Beach Gardens, Fla. – One thing for sure about business executive Paula Madison: her huge success was no accident! It was intentional; it was expected; and she’s fulﬁlling destiny in the business arena all across the globe. Her successes and business pursuits reads like a “Who’s Who” in the marketplace, and yes, she’s made all of those lists too. She and her two brothers impressively bought the WNBA’s most noted franchise, the Los Angeles Sparks pro basketball team. Eventually, they sold the team to Magic Johnson, which was equally impressive.

But their humble beginnings, growing up with a single, Jamaican mother makes their wild success even more of note. Despite growing up on welfare, their mother nonetheless expected the most from her children, said Madison, who was keynote speaker recently at the 21st Annual Dr. Martin Luther King, Jr. Celebration at Palm Beach State College in Lake Worth. Their mother would not allow them to settle for second best. And that’s the reason, she said to the large crowd, she’s always demanded more of herself than seemingly possible. “There’s a difference in being a dream and chasing a dream. If I was going to be the dream my mother envisioned, then I had to be a success,” she quipped. And a success she has been throughout the years. She rose from the ranks as a print journalist and ended up a top television news executive for NBCUniversal. She landed and negotiated the role of President/General Manager, on her own terms. She retired from NBC in 2011 after more than 35 years in the news media industry. She is currently the Chairman and CEO of Madison Media Management LLC, a Los Angeles based media consultancy company with global reach. Her family also owns The Africa Channel which broadcasts in the United States and the Caribbean. Various top cable networks carry the channel, which broadcasts travel, lifestyle and cultural series, specials and documentaries that the channel believes represents the continent’s best programming and reflects the land, people, culture, and history of Africa.

Madison has garnered numerous awards throughout her life and career. She was named one of the “75 Most Powerful African Americans in Corporate America” by Black Enterprise magazine in 2005 and in 2014 as one of the Outstanding 50 Asian Americans in Business. She is of African and Hakka descent. In 2015 she wrote the book Finding Samuel Lowe: China, Jamaica, Harlem about her grandfather’s life and travels and her own visit to Guangdong. She began research for the book shortly after retiring from NBC In 2015, she was recognized by East West Players for her contributions to the Asian American community, in particular for her documentary Finding Samuel Lowe: From Harlem to China, which chronicled the journey she and her brothers went on to rediscover their estranged father’s side of the family.

It’s apparent family is important to her and she is immensely proud of her unique ethnic makeup, grasping attributes from all sides. She chronicled her heritage in her memoir entitled, Saving Samuel Lowe: China, Jamaica, Harlem.

She has also gleaned valuable insight from family. Her uncle gave her a piece of valued wisdom: you have to question everything! Obviously that bit of advice was critical in her role as a journalist, which may have started with her mother’s love of news. “She consumed news, which is likely why I became a journalist,” she indicated. Her mother, she said, would read the newspaper to Madison and her siblings, and then would tell them to repeat after her. They did this daily. At 3 years old, she was reading at a top level, far above her years.

But coming to South Florida is always a treat to Madison, so she was especially delighted to oblige Palm Beach State College as their keynote speaker. Her uncle, Tony Harrison was wellknown in South Florida as he was a historian and the owner of a black bookstore in Fort Lauderdale. He ran the popular bookstore for many years until his passing several years ago. Madison has other family in South Florida as well and says she loves visiting the area and was honored to speak at Palm Beach State College.