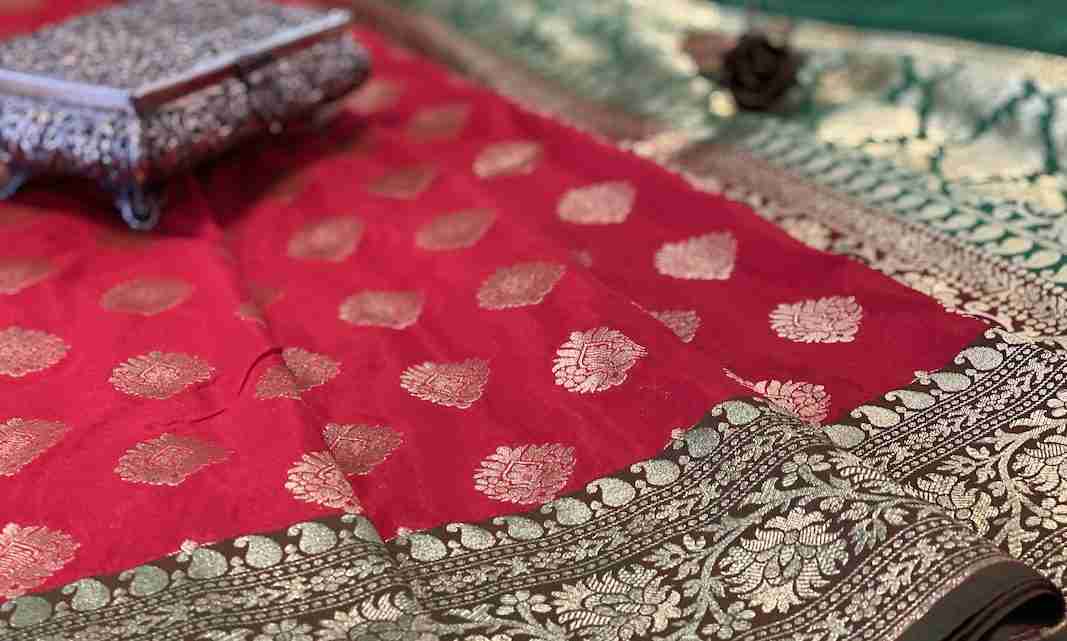 The 1500-year-old Banarasi silk saris industry, already going through an arduous time due to the pandemic, is staring at an uncertain future. The Indian government is contemplating a ban on Chinese silk yarn imports, the textile ministry officials informed a Parliamentary standing committee (PSC) on September 7.

This will add to the woes of the industry, which is dependent on China for superior quality yarn.

The Banarasi silk saris bring with them a rich trail of legacy and culture. Granted the Geographical Indication (GI) tag in 2009, India’s spiritual capital Varanasi, a city in the northern Indian state of Uttar Pradesh (UP), and its neighboring districts of Chandauli, Mirzapur, Bhadohi, Jaunpur, and Azamgarh are the official manufacturing hub of these saris. Varanasi, alone, is known to house 100,000 weavers.

Renowned for its intricate designs using gold and silk threads on premium quality silk, Banarasi saris are highly sought after, both in the domestic and international markets.

The Centre’s plan was conveyed during the PSC’s meeting on labor, headed by Biju Janata Dal Party’s Bhartruhari Mahtab. They deliberated on the subject of ‘Challenges and Opportunities – Indian Textile Industry’.

Though the Modi government aims to deal a blow to China — the world’s second-largest producer of silk yarn and largest silk exporter to India — with this proposal, the Banarasi silk industry is at a disadvantage.

“The Chinese yarn is of fine quality and fit for use in the power looms,” said Ashok Dhawan, Varanasi’s member of the Legislative Council. Dhawan is the patron of the Banarasi Vastra Udyog Association and has been associated with the industry for over 50 years.

“India imports the bivoltine crop yarn. In South India, we grow the multivoltine variety which isn’t on a par with China’s bivoltine and can be used only for the handlooms,” he said.

Vaibhav Kapoor, vice-president, Silk Trade Association, Varanasi, said the climate in India is unsuitable for the univoltine crop. “Although a few parts of southern India produce this variety, it still lacks the luster and strength of the Chinese univoltine yarn.”

“We have been forced to look for other avenues to procure raw material because of the Chinese tension,” said Arbi Patel (50), a Banarasi sari weaver at Sahupuri, a village in Chandauli. “We are planning to bring Surat-produced silk yarn from now on. The quality of saris will be affected, but do we have another option?”

“The pandemic had already impacted our livelihoods with the shutdown of the workshops. Now, the work has resumed. We might soon run out of yarn and will have to go looking for raw materials,” he added. The looms were shut in Varanasi and Chandauli from March 22 to August 6.

Patel, who made sales of around Rs 20,000 ($267) a month, is the sole breadwinner for his family of eight. He had received no orders between April and July. Meanwhile, with his sons, he took up construction work.

From traders to weavers, the whole supply chain has been disrupted.

“With only a few carriers operating, both operational and shipping costs have escalated by 60-70 percent,” said Mrigank Krishn Gupta, founder of the online marketplace “Shades of Benaras”.

Gupta, who employed around a hundred weavers across UP, said he faced difficulty in paying his employees. While his domestic online orders had started improving since August, the offline sales have not picked up.

Rajesh Yadav, a local trader in Mughalsarai, Chandauli, too, complained of not being able to pay his weavers. “We have resumed work since mid-August, but I’m unable to pay my weavers.” Yadav’s brocade and saris, which earlier went to Nepal, China, and Tibet, now find it difficult to find local buyers.

“The pandemic has brought the entire craft to a standstill,” said Rajan Bahl, general secretary, the Banarasi Vastra Udyog Association (BVUA). “The industry, which sees a yearly turnover of around Rs 7,000 crore ($951 billion), has hardly made 10 percent sales since April.”

The pandemic, which broke out during the summer wedding season,  ate up the festival season as well.

“We have lost the summer wedding season, the festivals of Holi, Eid, and Rakshabandhan, which used to reap us good profits. With the looms reopening in August, and restrictions easing on shipment, we now look up to Diwali and the winter weddings,” said Kapoor.

Brands have started looking for newer ways to revamp their businesses.

“We are innovating and redesigning our products — both for the artisan, keeping the social distancing norms in mind, and to fit the market needs,” said Aanchal Sagar, co-founder of Ohfab, an internationally acclaimed handloom brand.

“It becomes difficult to revive a traditional industry if the workflow falls out of track for a long time,” Kapoor spoke on a similar note.

Earlier, the Chinese government had imposed restrictions on the shipments carrying silk thread till February 24 to contain the virus. Later, the restrictions extended and have not eased until now.

“The Banarasi sari traders and weavers at Varanasi have decided not to use Chinese silk yarn until the relations with China improve,” said Bahl. “Due to the poor sales, we have not run out of stock yet. And even if we do, we will use Bangalore and Vietnamese silk yarn.”

Through the ASEAN-India Free Trade Area (AIFTA) signed by India and the Association of Southeast Asian Nations (ASEAN) on August 13, 2009, Vietnam exports duty-free silk yarn to India. Over the years, many traders have chosen the Vietnamese duty-free yarn over the 10-per cent duty imposed Chinese yarn.

“Although the yearly Chinese raw silk import has reduced from over 9,000 tons in the last decade to around 3,000 tons in 2019, it will take us considerable time to develop a suitable ecosystem in India for bivoltine silk crop. Until then, we’ll have to depend on China,” said Kapoor.

“We demand the government to stop the import of finished garments but permit the Chinese yarn. Additionally, a uniform import duty should be levied on all the countries, so a standard policy works in the benefit of everyone,” he added.