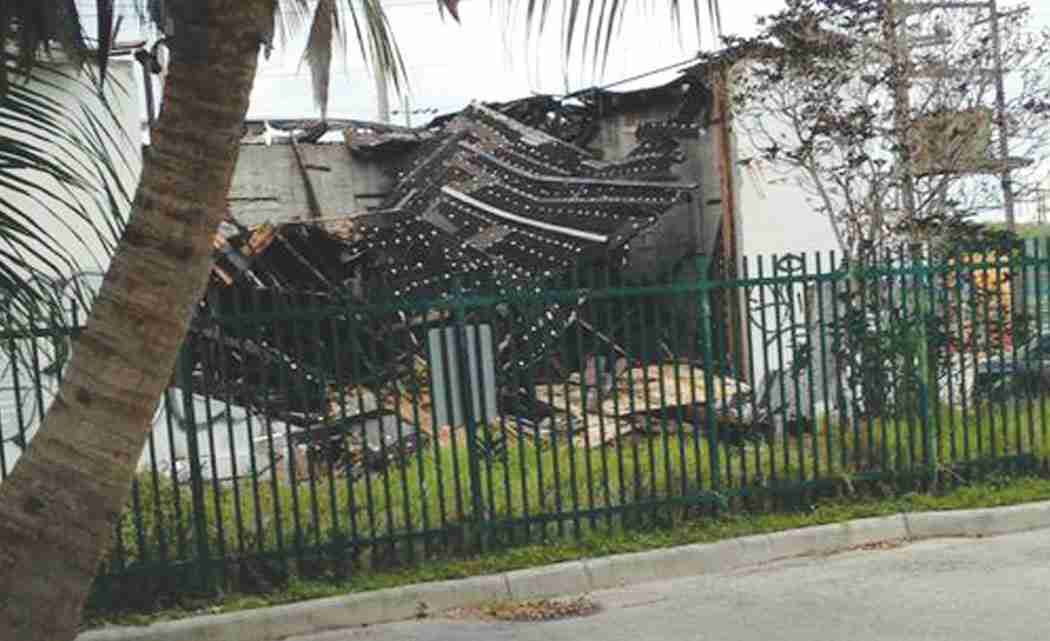 MIAMI — Just 15 days before his death in 1940, Dana A. Dorsey, “Miami’s first black millionaire,” deeded land for Miami’s second black library to be constructed within a year and a half. Dorsey wisely attached a sense of urgency to his bequest, which resulted in the library’s construction 18 months later.

Fast forward 75 years and the sense of urgency that led to its construction is not a part of its desperately needed repairs. Although efforts were apparently underway in 2012 to replace the building’s roof; no repairs were done and the roof has now collapsed.

Albert Sosa, then the city of Miami’s capital improvements director, informed Cornelius Shriver, then chief of staff for former District 5 Commissioner Michelle Spence –Jones, via an April 2, 2012 email that construction was to have commenced “in the second half of this year.”

Sosa was one of three high ranking City of Miami officials to abruptly resign in August 2012. He is now employed with a private “infrastructure solutions firm serving public and private owners and contractors.” A voice mail message left for Sosa was not immediately returned.

Permits to remodel the library had apparently been secured by the Poinciana Development Group; however, it is unclear why work on the project never commenced. Linda Forest, president of PDG informed Shiver in an April 2012 email that demolition and interior remodel permits “for the D.A. Dorsey Memorial Library Project at 100 NW 17 Street [have] been renewed.  The permit will stay open for 180 days from March 15, 2012.  It would be best if the project was started before the rainy season so the new roof can be dried in.”

The office telephone number for the PDG is no longer in service and a message left on the cell phone number listed for Forest was not immediately returned.

Shiver is now the assistant director of the Community Redevelopment Agency (CRA). In an emailed reply to the South Florida Times, Shiver stated, “One apparent problem is that the park and museum is located outside of the CRA boundaries and outside of city of Miami district 5. In the distance (sic) past there was an effort to rehab the building but…the contractor had internal problems and nothing happened. Currently the park is in D2 and as such, Commissioner Sarnoff (sic) office had to find a way to assist.”

Constructed in 1941 with $2000 raised by the ladies of the Washington Heights Neighborhood Association and Friendship Garden Club and $7,000 from the City of Miami, the Dorsey Memorial Library served the Overtown community for 20 years before it was abandoned for a different branch.

The one-story building located at NW 17th Street and 1st Avenue, which has been historically designated by the City of Miami, has fallen into major disrepair.

Laura Lavernia is the executive director of Dade Heritage Trust, an organization that advocates for historic preservation of significant properties in Miami-Dade County. After being made aware that the roof of the library had collapsed, Lavernia sought assistance from District 2 Commissioner Marc Sarnoff and District 5 Commissioner Keon Hardemon. Lavernia took a few photographs of the building herself, which she has shared with both commissioners’ chiefs of staff, Ron Nelson (Sarnoff) and James McQueen (Hardemon).

“As the pictures attached demonstrate, half of the roof’s wood framing has collapsed and impacted one of the bays on the rear elevation.  In this state, the building not only poses significant threat to the nearby residents – but also stands to be completely lost fairly soon if nothing is done,” Lavernia wrote in an email to the commissioners’ staff members.

She said that while there to photograph the building, several community members approached her to request that the building be saved.

“We are asking if your two offices can’t work together and come up with a solution to, at least, re-roof the building and re-build the rear bay which has collapsed,” Lavernia wrote. Lavernia also indicated that according to Megan Schmidtt, the Historic Preservation Officer, a fence was installed around the property on May 22.

Enid Pinkney said that the library is an important part of Miami’s history and that it was born of necessity.

“The Dorsey Library was the only library in Miami that black people could go to and sit anywhere and use the Library. I tried to use the downtown MIami library one time when I was in high school back in the 40’s and…I could not sit in the reading room or anywhere else in the Library,” said Pinkney, a Dade Heritage Trust board member.

With the beginning of hurricane season just days away, Lavernia implored the city to secure emergency funding to save the library, which began its initial inventory with 2000 volumes that had been housed in the Dunbar Branch. The library included two wings, one for adults and one for children.

“We understand that initial funding in the amount of $250,000 has been secured for this building– and we are writing to see if additional sources of funding can be secured on an emergency basis,” said Laverina, who stated that she also requested “emergency funding for the building from the National Trust, but their funds were depleted.”  She added, “this community has lost enough already.  It would be a shame to lose this building.”

In an email to city officials requesting a “synopsis of what has transpired,” regarding Dorsey Library, Nelson said, “This has a very long history of starts and stops, funding and no funding, proposed uses, and last we knew it was a funded CIP project.”

A message left with Wendy Jamarillo in the city’s Capital Improvement Project(CIP) office was not immediately returned.

Pinkney said that the “community should get involved in the preservation of the Library because of its legacy and history in Miami.”

Next post US investigating gender bias claims in U. Iowa athletics