Family of Black teen killed 15 years ago recall his death 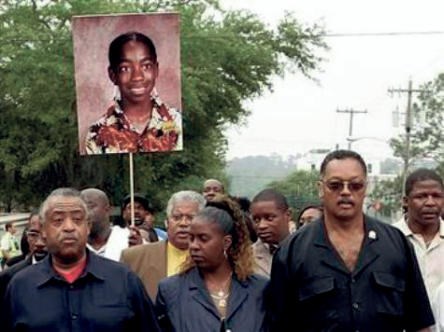 Anderson shares not only the same ﬁrst name as Martin Luther King Jr., they also share the same Jan. 15 birthday. In fact, he’s named after the revered civil rights leader. Anderson was killed the ﬁrst day he was in the Bay County Sheriff’s Ofﬁce Detention Center that had been developed into a boot camp-style center _ a tragedy that garnered national attention at the time.

Fifteen years later, his father, Robert Anderson, still struggles with the thought of his son not being here.

“I remember walking in the hospital and seeing him on the bed and I kind of ﬁgured it was over,” Anderson said. “My emotions, I can’t explain because I had so many thoughts going through my mind.”

Robert Anderson said his daughter, Startivia Anderson, has sons of her own and one of them is named Martin. It gives his grandfather solace to see him because he said he looks just like his late son.

Martin Lee Anderson died Jan. 6, 2006, shortly before he turned 15. He was doing a 1.5-mile run at the boot camp when he collapsed and said that he couldn’t breathe.

Seven ofﬁcers were seen on video hitting and kicking Anderson after he stopped running during the drill. The ofﬁcers also covered Anderson’s mouth and forced him to inhale ammonia fumes.

The seven ofﬁcers and a nurse were charged with aggravated manslaughter, but were acquitted on Oct. 12, 2007 by a jury almost two years after the death. The death closed down the Bay County Sheriff’s boot camp and later the Florida Legislature voted to close down other boot camps in the state.

Startivia was young when her brother died, so she couldn’t process exactly what was going on. She said she still doesn’t understand how all the boot camps were shut down in Florida after her brother’s death but yet the ofﬁcers and the nurse were found not guilty.

Famed social justice attorney Benjamin Crump represented the family in a civil lawsuit, winning a $5 million settlement against the state. He has since gone on to be a nationally recognized attorney.

His fame doesn’t sit well with the Anderson family.

Startivia said she doesn’t like Crump going around the country talking about Breonna Taylor, George Floyd and Trayvon Martin.

“My brother made you (Crump),” Startivia said. “All three (Taylor, Floyd and Trayvon) of their lives mattered, but so did my brother.”

Anderson’s case changed the career path for Crump, who was an up-andcoming personal injury attorney in Tallahassee.

Startivia remembers one of the ofﬁcers being at the hospital with the family and looking nervous. She couldn’t remember the name of the ofﬁcer, but she said the ofﬁcer knew what happened and that was before the video was released to the public.

Local NAACP President Dr. Rufus Wood said Anderson didn’t do anything different than any other teenager. He said there’s probably a lot of things adults have done as teenagers they regret in retrospect.

Wood remembers the national coverage of the incident, but he said it didn’t carry the same weight that others did like Trayvon Martin and especially not like the incidents this last summer that included the deaths of Breonna Taylor and George Floyd, which sparked protests across the nation.

“In 2006, the technology wasn’t what it is with Trayvon (Martin) in 2012,” Wood said. “Now it did gain national attention because during the trial they had news media from everywhere, but at that time there wasn’t social media where it would go viral.”

Wood also pointed to other deaths, including that of Philando Castile who was shot during a trafﬁc stop in Minnesota in 2016. It was captured on Facebook live by his girlfriend Diamond Reynolds and went viral.

He remembers when the national media left, Jesse Jackson and other pub-