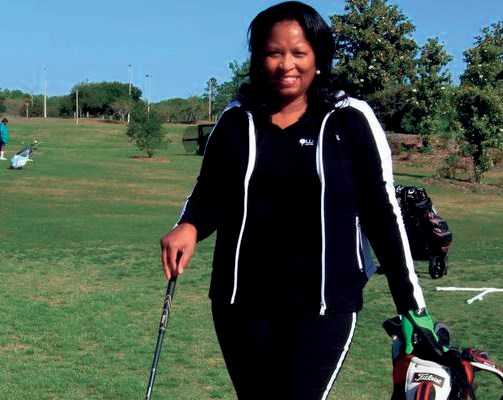 TALLAHASSEE, Fla. (AP) – When Clemmie Perry decided to take up golf eight years ago, her reaction was immediate.

First, Perry enjoyed the sport and quickly improved her skills. Secondly – and even more importantly – the 1979 graduate of Florida A&M discovered her life’s ambition due to a glaring omission on the course.

“I didn’t see anybody that looks like me,” Perry said.

“I immediately realized I had to change that. And what I discovered about golf – when you look at the numbers – they are glaring.”

Perry, a vibrant, driven woman whose family has long been involved in education and social change in her Tampa hometown, discovered that of the 30 million golfers in the United States, 4 million are minorities and less than 1 percent are women of color.

Determined to make a difference, Perry – using her severance package from work – in 2014 launched Tampabased nonproﬁts Women of Color Golf and Girls On the Green Tee. The organization is designed to increase and promote minority participation in golf for women and girls.

Perry’s impact has been inspirational, far-reaching and, this week, Super Bowl bound.

“You can’t make this story up,” Perry said. “This has been driven by faith.” Perry’s early efforts earned invitations to Washington during President Obama’s administration to be honored as a White House “Champion of Change for After School Extracurricular Enrichment for Marginalized Girls.” In December, the PGA Tour announced that Women of Color Golf & Girls on the Green Tee was named the 2020 PGA TOUR Charity of the Year.

The award comes with a $30,000 grant from the PGA TOUR to assist WOCG & GOTGT in expanding their footprint. Since 2014, more than 600 minority women and girls have been introduced by Perry’s non-proﬁts to the basic fundamentals of golf.

And, on Monday in Tampa at Carrollwood Country Club, the WOGC is holding the inaugural 9-hole Golf Classic in partnership with the NFL Alumni Tampa Bay Chapter, Super Bowl of Golf 2021. Former Tampa Bay Buccaneers cornerback and 2021 Pro Football Hall of Fame ﬁnalist Ronde Barber is scheduled to host and emcee the event.

Of course, adding to the excitement are the hometown Bucs, who played the Kansas City Chiefs in Super Bowl LV at Raymond James Stadium Sunday. Perry knows her football, too, as a former Buccaneers and Miami Dolphins cheerleader.

FAMU graduate Clemmie Perry launched the Tampa-based nonproﬁts Women of Color Golf and Girls On the Green Tee in 2014.

Perry was raised on the importance of diversity, equity and inclusion.

Her mother was the ﬁrst Black woman to chair the School Board in Hillsborough County, serving for three terms. Her grandmother worked for over 40 years as a teacher and assistant principal in Tampa. Both women have schools in Tampa named in their honor.

Perry also credits FAMU for helping shape her personally and professionally, remaining connected with the university through its Tampa alumni chapter. Among her fondest memories is The Marching 100, saying the university’s band “has always been breathtaking.”

“Great teachers, great mentors. It was a time you had to learn to be the best that you could,” said Perry, who has over 20 years of experience working with Fortune 500 companies. “It was preparing us to be able to adjust to the world that was going to have to be diverse and inclusive and be successful in it.”

While building a non-proﬁt has been a daunting task, Perry remains committed to strengthen and widen her mission through business partnerships and philanthropic endeavors. The Tampa Bay Lightning Foundation in 2018, for example, awarded Perry $50,000 as part of its “Community Heroes” grant program.

When Perry found golf, her life changed. Now she’s helping girls and women who look like her change their lives through golf, too.

“We talk about what golf does – access, opportunity, networking . ” Perry said.

“The numbers were telling the story. I didn’t have to make it up. It was standing there in front of me. We’ve been doing the work. If the door opened and you are not ready, you can’t walk in.”

Next post Fetterman makes it official: He’ll run for US Senate in 2022