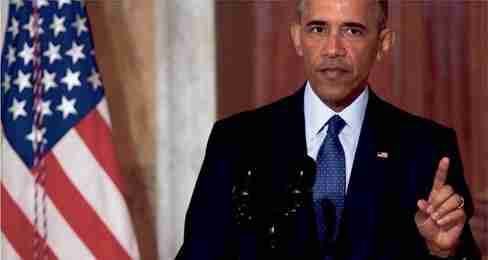 WASHINGTON – As news of the nightclub shooting in Orlando spread, Donald Trump revived the debate over what to call acts of violence by people inspired or directed by extremist groups like the Islamic State. Even before it was clear the presumed gunman, Omar Mateen, had expressed an allegiance to the Islamic State during the shooting that killed 49 people and wounded 53 in Orlando, Florida, the Republican presumptive nominee declared President Barack Obama should resign if he did not use the words “radical Islamic terrorism” to label the massacre. Obama did not use the phrase. Trump’s Democratic rival, Hillary Clinton, didn’t either. Here’s a look at how Obama, Hillary Clinton and Trump have described the Orlando shooting, and others like it, and what the fight over language is really about. OBAMA:

In his statements on the attacks, Obama has used only one of the three words Trump demanded to hear: terrorism. Obama has noted the FBI was investigating the attacks as an “act of terrorism.” But it was no surprise that Obama didn’t use the “radical Islamic” label.

The president has said he is loath to connect such attacks to Islam — even if described as a radical strain. To do so would be unnecessarily provocative, the White House has said, noting the potential to anger Arab allies, alienate Muslims at home and abroad and, in the case of the Islamic State group, validate the claims of the enemy. “ISIL is not ‘Islamic.’ No religion condones the killing of innocents.” Obama said in September 2014, using his preferred acronym for the group. CLINTON:

Clinton’s initial statement on the Orlando attack was in line with the president’s remarks. She, too, called it an “act of terrorism” and vowed to defeat unnamed “international terrorist networks.” But the former secretary of state inched closer to the Islamic label than Obama in follow-up comments Monday morning — a sign, perhaps, of the political potency in the debate. “Whether you call it radical jihadism, radical Islamism, I think they mean the same thing. I’m happy to say either,” Clinton said on CNN. “What I won’t do, because I think it is dangerous for our efforts to defeat this threat,

is to demonize and demagogue and, you know, declare war on an entire religion. That plays right into ISIS’ hands.”

Clinton did not use the adjective “Islamic,” as Trump does, but instead “Islamism,” which specifically refers to Islamic fundamentalism or militancy. TRUMP:

Trump and many Republican allies have cast both Obama’s and Clinton’s parsing style as political correctness with dangerous consequences. The failure to prominently connect acts of terror to radical elements within Islam results in a failure to confront the root causes, they argue.

“Unless you’re going to say it’s radical Islamic terrorism and hate … you’re never going to solve it,” Trump told CNN on Monday. “And you have Hillary Clinton refuses to use the words. Now, she doesn’t really believe that she shouldn’t use it; she’s afraid to use it because President Obama doesn’t want her to use it.”

This line tracks with Republicans’ broader critique of Obama, and by extension Clinton, when it comes to fighting terrorism. Trump has blasted Obama as “weak” and ineffectual, and suggested he’d be more aggressive in going after the Islamic State.

Next post Republicans defend display of Confederate imagery in Capitol