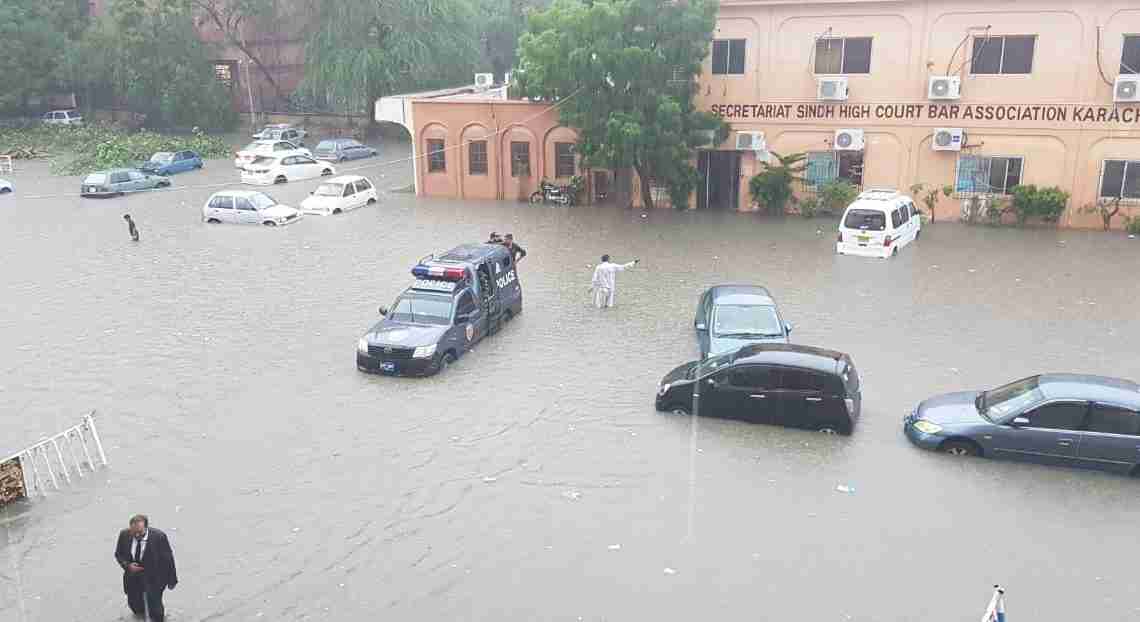 “The situation is really bad,” said Paras Saif, who works at an advertisement agency in the city. “The sewerage system of Karachi looks like it has been blocked. People are stranded in their homes. There is no electricity.”

At Shahra-e-Faisal, one of the busiest thoroughfares in the financial and industrial center, video posted on Aug. 27 shows a police van stalled in high water on a street that looks more like a river. In the video, the policemen in the van are seen climbing onto the roof of the vehicle, waiting for people on the other side of the road to rescue them with a rope.

The arterial Muhammad Ali Jinnah Road was under water on Aug. 27, and heavy container vehicles on the road were washed away. Upscale areas of the city, such as Defence Housing Authority and Clifton, were also inundated.

“The original plan of Karachi had 65 drains in order to create a passageway for water, and there were separate pipelines for sewage,” environmentalist Maryam Shabbir told Zenger News. “But as the population of the city increased, the drains got clogged with solid waste.

“The relevant authorities in Karachi are not taking care of managing the water,” Shabbir said. If you look at the history, then you will see that when the issue of blockage due to solid waste started surfacing … sewage treatment plants were built in Karachi with the help of the Asian Development Bank and the World Bank, but due to the lack of interest on the part of the authorities, proper transport of sewerage could not be maintained.”

Residents are blaming the authorities for not taking sufficient measures to prevent urban flooding, with #KarachiSinksNoOneThinks trending on Twitter.

“We will be announcing a plan for a permanent solution to the problems caused by floods by cleaning of nullahs, fixing of the sewage system & resolving the huge challenge of water supply to the ppl of Karachi. We will not abandon the people of Karachi in their time of crisis,” he wrote.

“Flooding happens in other cities of Pakistan, such as Lahore, as well,” said Shabbir, “but the intensity in Karachi is much higher.”

She said overpopulation and people migrating to the city in search of jobs are part of the reason why there is so much pressure on the city’s infrastructure.

“Before Islamabad became the capital of Pakistan, Karachi was the capital of the country,” said Shabbir. “Most of the investment happened here, and so people started settling in the city in search of jobs.”

With a population of about 15 million, Karachi is home to the Pakistan Stock Exchange, making it the most valuable city for Pakistan’s economy, generating about 25 percent of the national GDP.

Meteorological experts have blamed unpredictable weather patterns. Annual rainfall in Karachi is usually about  seven to eight inches total, but this year has been different.

In July, there were also several spells of heavy rain.

“The monsoon clouds enter Pakistan from India to the east,” said Sarfaraz. “This year, the monsoon has been prolonged because it was stalled in Rajasthan (in west India) and then it merged with the cloud formation from the Arabian Sea in Pakistan’s Sindh province.”

Shabbir said the government of the Sindh province, of which Karachi is the capital, is also to blame for not managing the situation.

The prime minister tweeted: “My govt is fully cognizant of the suffering of our people in the wake of the heavy rains, especially the people of Karachi. I am personally monitoring the relief & rescue operations & am in constant contact with Chairman NDMA [National Disaster Management Authority] & Governor Sindh for regular updates.”