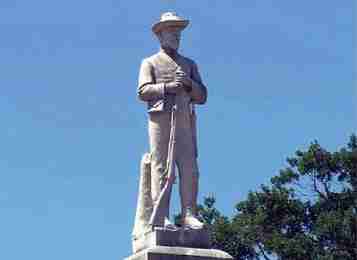 LAKELAND, Fla. (AP) – A Confederate soldier monument will be moving from a Florida city’s downtown park now that money has been found to pay for it.

The Lakeland Ledger reports that the city commission voted to use $225,000 from red light camera violations to move the monument from Munn Park in Lakeland’s downtown to a local park dedicated to veterans. The move is expected to be completed by Jan. 31.

The commission voted in May to move the statue to the veterans park but provided no taxpayer money to pay for it. Private donations fell well short of the amount needed.

The statue, like many others across the South, depicts a generic Confederate soldier atop a pediment. Some commissioners said the veterans’ park is a more appropriate site for the monument.