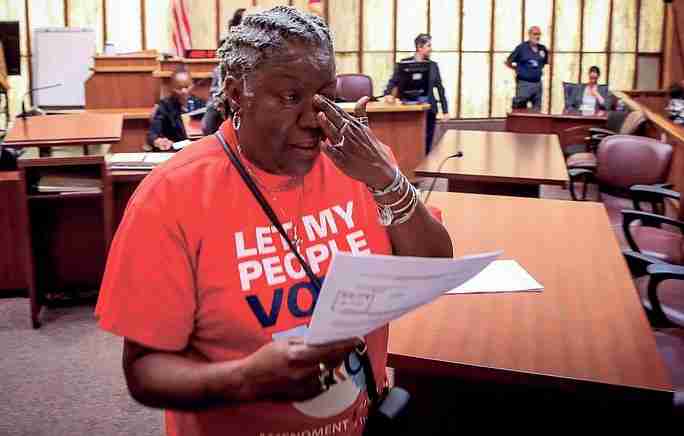 Tallahassee, Fla. (AP) – After hearing seven days of testimony, a federal judge on Wednesday began weighing whether Florida Gov. Ron DeSantis and other Republican lawmakers were motivated by partisanship when they stipulated that felons must pay all legal debts before regaining their right to vote.

The decision could have deep ramiﬁcations: The state’s estimated 774,000 disenfranchised felons represent a signiﬁcant bloc in a state well known for razor-thin election margins. Many of those felons are black and presumably Democrats.

With the state’s August primary and the November presidential election looming, the judge said there was some urgency to his ruling.

During closing arguments Wednesday, lawyers for the plaintiffs asserted that the Republican-controlled Legislature was motivated by race, gender and partisanship when it passed a bill deﬁning what it means to complete a sentence under a 2018 ballot measure known as Amendment 4.

The bill, later signed into law by DeSantis, requires felons to pay all ﬁnes, restitution and other legal ﬁnancial obligations known as LFOs before their sentences can be considered fully served. Amendment 4 permanently bars convicted murderers and rapists from voting, regardless of ﬁnancial debts.

“The Florida Legislature crafted an LFO requirement that it knew would disproportionately harm black voters,” argued Leah Aden of the NAACP Legal Defense Fund, one of several groups representing disenfranchised voters. The intent, she asserted, was to help Republican candidates.

But Mohammad Jazil, an attorney for the governor and the secretary of state’s ofﬁce, said there was no racial animus when the Legislature implemented Amendment 4.

“I do not believe anyone has offered direct evidence of racially discriminatory intent in this case,” Jazil told the court.

The judge expressed skepticism over the state’s arguments, however.

“Why is it all the Republicans voted yes, and all the Democrats voted no?” U.S. District Court Judge Robert Hinkle asked during the state’s closing argument. “That was not a coincidence. It would be stunning if somebody told me that they did not realize that African Americans tend to vote Democratic.” At one point Wednesday, the judge telegraphed that he would be issuing an injunction against the state when he advised one of the state’s attorneys about readying an appeal. It was one of the more intriguing moments of Wednesday’s proceedings, which were held over video and telephone because of the coronovirus outbreak.

Hinkle has acknowledged that he won’t have the last word in the case and expects whoever loses to appeal.

In October, the judge issued a preliminary injunction against the state that a three-judge panel of the 11th Circuit let stand ﬁve months later. And last month, the Atlanta-based appellate court declined to hear a further appeal backed by the governor.

Hinkle’s preliminary injunction did not preclude Florida from revoking voting rights from felons who have the means to repay outstanding ﬁnancial obligations but who refuse. But he likened the state’s ﬁnancial requirement to a poll tax on felons who are too poor to fully settle up.

The just-completed trial in Florida underscored how onerous – and potentially crucial – a challenge faces elections ofﬁcials tasked with determining who among the state’s hundreds of thousands of released felons can vote.

A university study introduced during the trial found that at least 774,000 felons across Florida’s 67 counties are ineligible to vote because of ﬁnancial debts. Many thousands more could also be ineligible, according to the study, which did not account for felons convicted outside Florida or in federal courts.

Hinkle questioned state ofﬁcials on their ability to promptly review cases. On Monday, the state’s director of elections, Maria Matthews, acknowledged that her staff can currently review fewer than 60 cases per day.

Hinkle did the math and concluded Wednesday that it could take six years for the state to process voter registrations ﬁled by felons seeking access to the ballot box. At that pace, he noted, many felons won’t be able to cast ballots in November and possibly in 2024 and beyond.

The judge expressed exasperation that state ofﬁcials had not even completed reviews of the 17 felons who are named plaintiffs in what grew into a consolidated class action lawsuit.