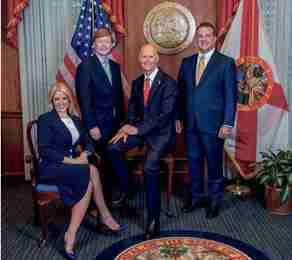 Tuesday’s meeting was filled with tributes to veterans, entrepreneurs, teachers, police officers and those who helped the Panhandle recover from Hurricane Michael.

Scott, Agriculture Commissioner Adam Putnam and Attorney General Pam Bondi also paid tribute to each other as the Republicans ended eight years of working together.

Resolutions were approved to recognize their service.

Each is leaving office due to term limits. Scott was elected to the U.S. Senate last month and Putnam lost a bid to replace him.

Chief Financial Officer Jimmy Patronis is the other Cabinet member. He was appointed by Scott to fill an unexpired term and elected last month to continue in his job.