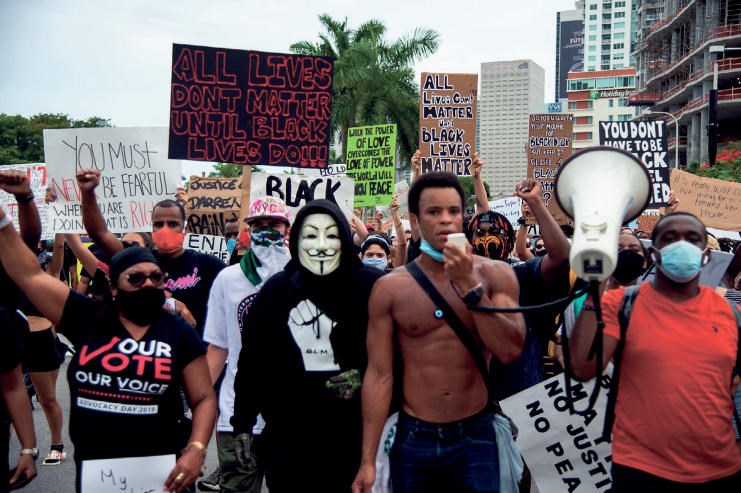 TALLAHASSEE, Fla. (AP) – Legislation that would increase penalties against violent protestors narrowly cleared a Florida Senate committee on Friday after hours of passionate debate with deep racial overtones and is another step closer to reaching the desk of Gov. Ron DeSantis.

The Republican governor has made passage of the bill a key legislative priority, launching his push last fall after months of turmoil across the country over the killing of Black people by police. DeSantis has argued that the state’s laws need to be strengthened to preserve law and order and to deter violent protestors from destroying property.

Critics argue that it was squarely intended to quell the Black Lives Matter movement, which roiled the streets after the death of George Floyd, a Black man who died last May while being detained by Minneapolis police. The trial against former police ofﬁcer Derek Chauvin is currently underway.

The measure presented a clash between the First Amendment’s right to peaceably assemble and the rule of law.

“I think something needs to be done. I don’t think protests or demonstrations are going to stop tomorrow. They will not. I don’t know where the balance is,” said Sen. Ed Hooper, a Republican who voted for the bill.

“Is this the right thing? I think history will tell us that,” Hooper said.

The House has already approved the measure, and its fate in the Senate was unclear when the Criminal Justice Committee declined to hear the bill. In an anomaly, the committee’s chair, Sen. Jason Pizzo, is a Democrat and he opposed the bill.

For it to move, the bill was shuffled over to the Senate Appropriations Committee, which usually focuses on budgets and money matters.

“A yes vote on this bill, I will tell you squarely, puts you on the wrong side of history,” said Pizzo, also a member of the Appropriations Committee.

The 20-member committee – 12 Republicans and eight Democrats – voted 11-9 to advance the bill to the full Senate. One Republican voted with Democrats in opposing the bill. Democrats were a vote shy of a tie vote, which would have killed the measure.

DeSantis is up for re-election next year, and he is said to be contemplating a run for president in 2024.

“He doubled down for his own reelection and his presidential aspirations,” Pizzo said.

The governor’s ofﬁce did not immediately provide a comment.

Scores of people testiﬁed against the measure, rejecting assertions by Republican lawmakers that the bill was intended to address such events as the Jan. 6 attack on the U.S. Capitol. DeSantis, however, ﬁrst broached the legislation during a September press conference.

While the measure’s ofﬁcial title refers to “Combating Public Disorder,” most Democrats and other critics say the measure will have a chilling effect in how people exercise their constitutional rights to free speech and peaceful assembly.

The bill would increase penalties for crimes committed during a violent protest, and it would create new felonies for organizing or taking part in demonstrations that turn violent.

“Black and Brown people are treated differently by law enforcement ofﬁcers,” said Sen. Randolph Bracy, among the committee’s four African American lawmakers, all Democrats. “If a person does not believe that, they are in denial.”

Next post How you can support your Muslim friends, relatives in this Ramadan season