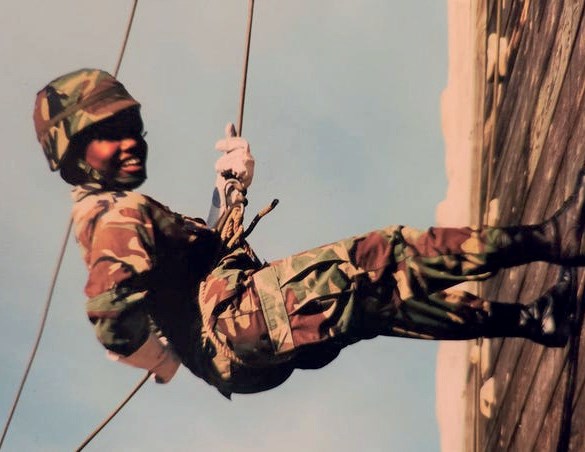 FAYETTEVILLE, N.C. (AP) – When Jasmine Coleman reflects on her time in the Army, it’s mostly with a sense of pride, but she doesn’t negate the experiences of others.

“I sometimes think of how my life would have progressed if I had been born 20 or even 15 years earlier,” Coleman said. “There would have been some open doors, but many closed ones, too – shut tight purely because my skin color is darker than someone else’s. You look at civil rights leaders and martyrs, I think of Sgt. (Medgar) Evers, a World War II veteran who wanted to help people vote and register to vote and was killed, still trying to serve his country.” Coleman grew up in Spring Lake after her father retired from the military.

She said her grandfathers, uncle – someone from just about every generation of her family – have served in the military.

Coleman’s ﬁve uncles fought in either the Vietnam or Korean wars and returned to a nation where they had to ﬁght for equality and respect with the rest of Black America, she said.

Growing up, Fort Bragg was “always there,” she said.

Being one of ﬁve siblings, she said, she always thought it’d be one of her brothers who’d join the military.

Yet by the time she reached her senior year at Pine Forest High School in 1998, she realized joining could help alleviate the cost of college.

“It was after the ﬁrst Gulf War,” Coleman said. “So my understanding was the worst-case scenario would be going overseas away from family. Sept. 11 had not happened yet. I had family that went overseas during the Gulf War and came back. It wasn’t like I was drafted. It’s a volunteer Army.” Coleman remembers her father placed his hand on her shoulder and said she was the “pick.”

“It was an interesting position to be in,” she said. “There’s a sense of patriotism, but also being from Black America … My dad grew up in Mississippi and said there’d be times that `People don’t want you there, because you’re female or not see you because you’re Black.’ But he said, `Make damn sure when they see you, you look good.’ That was the one thing I always carried with me. For classiﬁcation purposes, I may be deemed a minority, but nothing I’ve done in my life has ever been minor – nothing.”

Coleman was the ﬁrst in her family to complete a college degree. Then she earned a master’s and now she’s considering enrolling in a doctoral program.

Coleman considers her eight years in the military to be one of the best decisions of her life.

Her ﬁrst year was in Oklahoma. From 2000 to 2002, she was with Bravo Company of the 96th Civil Affairs Battalion at Fort Bragg, and the remainder of her time was with the National Guard under a Joint Special Operations Command headquarters unit.

“I joined to see the world, and I saw Oklahoma, then they brought me back home,” Coleman joked.

The ﬁrst time she ever stepped on a plane was to go to basic training in Missouri – she originally thought she’d be on a bus to go to South Carolina.

“I used a payphone to call my dad and say, `Dad they changed it. They said I got to go to Missouri on a plane,”’ she recalled. “I was scared. He said, ‘They got you now. Welcome to the Army.”

Coleman completed her initial training in Missouri and then took a bus back to South Carolina for advanced training.

In Oklahoma, she met her husband, who was also in the Army and is from Raleigh.

Soon after they were married, he went to jump school and was assigned to Fort Bragg.

Because she was pregnant with the couple’s ﬁrst child, the command granted her an exception to be assigned at Fort Bragg in 2000, an allowance she is grateful for. She remained there until 2002.

FATHER’S DETERMINATION Coleman said her experience in the military was different from her father’s who was in the special forces before the selection process was established. It was her father who instilled in her the determination to succeed when others didn’t want her to.

Coleman said her time in the military was even different from her husband who was in combat ﬁeld artillery and infantry. She served in administrative positions. Her Civil Affairs unit at Fort Bragg had about 28 people in the company – two were Black, two were Hispanic, and she was the only woman.

Coleman said she was part of a unit with good leadership who strived to make her feel comfortable and provide support. And, she said, she strived to ensure she put the best effort into her job to stay up to date on policies and regulations; and if she didn’t know the answer to something, she found someone who did.

Coleman said that because she was a mother, she had a fellow soldier who volunteered to go in her place downrange for a deployment. She said stories of heroism aren’t just about people “following orders” but rather about “individuals who make sacriﬁces and choices that are life-altering and life-saving.”

Coleman said “there are people who are going to be jerks,” but she’s known people who would give her the keys to drive their car, invite her to stay with them when her husband was deployed or she’d invite them over during the holidays when they were away from their home state.

“That’s what forged relationships,” she said. “We still have those connections, and it’s those relationships that built memories.”

In one instance, she was working on a recognition list for Hispanic Heritage Month and a supervisor looked at the list and pointed to the name of a soldier he said was Black. Coleman told the supervisor the soldier spoke Spanish and was Panamanian.

PEOPLE OF ALL RACES

“Just like not everyone is Black identiﬁes as African American – there’s Jamaican, and in this instance, the soldier was from Panama, and I had to argue to get them to recognize her. I guess people see what they want to see, and I think that’s important that there are people of all races to be able to speak up for the person who’s not there.”

And, she said, the majority of Black leaders have been in quartermaster, food, supply or support military occupational specialties.

She said she’s seen more issues in the private sector than in the military, and those weren’t necessarily race-related.

Most question or overlook that she is a veteran because she is a woman, she said, noting a time she was questioned parking in a spot reserved for veterans at Lowe’s.

“I’ve had someone say you don’t look like a veteran,” she said. “Well, what do veterans look like?” In one instance, Coleman said, she and her family were visiting her inlaws in Clayton when her husband went to Dairy Queen and someone nearly hit their car in the parking lot. The driver started cursing at her husband and used a racial expletive. “It’d been after his deployment to Afghanistan, and his response was, ‘You don’t call me that. I served my damn country. I’m a paratrooper.”

Coleman said she, too, is proud of her service, proud of her country and proud of what America aspires to be. “It makes me want to be part of the solution. you can look at how far we’ve come as a nation and see how far we have to go.”

Coleman said one way she thinks the military has progressed as being an example for diversity through integration, policies, repealing “don’t ask don’t tell” and allowing transgender service members to serve.

“On one hand people even question me as a Black woman, `How could you serve,’ when looking at the country’s state of affairs and race relations,” she said. “What I seek is the protection of civil rights. I feel like being in the military is part of the solution, or at least trying. We’re putting people all over the world together.”

That is why, Coleman said, she feels comfortable working in environments with veterans, because she sees a shared sense of community and values.

Coleman currently works at the University of North Carolina and Pembroke as assistant director for academic and military outreach, where she said she relates to students she sees, as a veteran, a military spouse and the daughter of a veteran.

School was one of the reasons she joined the military, she said.

“And every job I’ve had has been linked to being in the military,” she said.