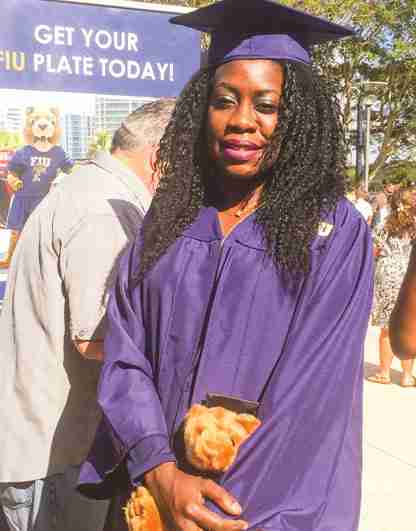 PEMBROKE PINES —Sharella Spikes’ life can be summed up in the quote, “It’s not where you’re from, it’s where you’re going.” Raised in Scott Projects, one of Miami’s housing developments where teen pregnancy and dropping out of high school are common occurrences, the 41-year old single mother of two recently earned a bachelor’s degree and is considering law school.

Thanks to a grandmother with a grade school education who expected more for her children and grandchildren, Spikes said she began to read when she was a toddler. Born to a teenage mother who also grew up in Scott, Spikes said her mother’s work ethic despite her tender age was a motivation.

“I’ve always seen my mom work, it was never an option to stay home and not go to school,” said Spikes. “My mother worked at Jackson Memorial Hospital for 30 years.”

While her mother also held high expectations for her, Spikes said her grandmother, who died in 2003, instilled a deep value for education.

Losses also played a role in Spikes’ determination. “My stepfather, Leroy…an Army veteran was robbed and murdered in Opa-locka when I was in the 10th grade. Also, my dear friend Marlin Barnes was murdered in 1996 at the University of Miami.” Deaths of family and a close friend could have derailed her focus; however, Spikes said the losses served as motivation.

“When I think back, knowing both of these individuals made me a better person and their words of encouragement have always stayed with me,” said Spikes, who earned a bachelor’s degree in political science from Florida International University in December.

She said her children, Brandon, 15 and Storm, 11, are two of her biggest supporters.

“My son told me he was proud of me with tears in his eyes,” she said.

Spikes’ cousin, Jonathan Spikes, who also grew up in Scott Projects, is another of her supporters.  “I was not surprised at her accomplishments,” he shared. “I know the struggles she had to endure in order to bring that to fruition. She had some challenges and did not let anything stop her,” said Jonathan, who is the president and CEO of Affirming Youth, a non-profit aimed at helping underserved youth realize their potential.

His cousin used the military as a stepping stone to realizing her potential; joining the military when she was 17 for the educational benefits; “I’m very proud of being a veteran.”

After almost three years of active duty, which included stints in Korea and Alabama, she returned home. Her path to obtaining her bachelor’s degree included earning an associate’s in 2003; after which she, “Took some time off and had some babies, and then decided I wanted to further my education.”

She has her sights on becoming an attorney.

Her advice to others considering college (or any important goal) comes from experience and is based on larger life lessons.

“It’s always important to surround yourself with love and support. When I didn’t do that is when I got off course. So I try to live by that rule from now on and it works,” she shared. “Just don’t make room for the negativity. Also give the love that you want to receive.”