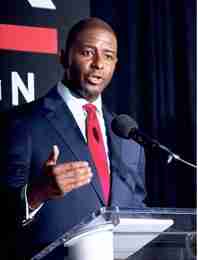 There may have been joy in Washington yesterday morning for Democrats but in Florida it was once again a time to weep. President Donald Trump and his Republicans kept the governor’s mansion, two Republicans instead of just one will go to the U.S. Senate, the Legislature remains in the hands of the Grand Old Party and the Cabinet will include a new Attorney General who wants to kill “Obamacare.”

For governor, Floridians rejected the vastly more qualified Democrat Andrew Gillum in favor of Republican Ron DeSantis, who launched his campaign by teaching his pre-teen son to use building blocks to create Trump’s immigration wall and reading to his infant child bedtime stories centering on the president, while infusing his rhetoric with racism.

Floridians also rejected the seasoned U.S. Senator Bill Nelson in favor of the outgoing Governor Rick Scott, who, The Miami Herald reported, has made millions of dollars through ongoing private investment and whose Columbia/HCA was fined $1.7 billion for Medicare fraud a decade or so ago. Scott rejected billions of dollars from the federal government to expand medical insurance coverage to tens of thousands of Floridians and so adamantly rejects climate change that he forbade state employees from even using that term.

If there was one happy outcome, it was passage of Amendment 4, which automatically restores civil rights, including the right to vote, to all former felons, except those convicted of murder or serious sexual offenses.

More than one million Floridians will be affected by this amendment, many of them Democraticleaning African Americans.

The national picture is much better for Democrats, who won at least the 218 seats needed to take control of the U.S. House of Representatives for the first time in a decade.

Now not only will the Democrats be able to check the excesses of the president and the sycophantic Senate; they will also be able to initiate programs and launch investigations that the Republicans ignored, including questions about Trump’s financial records.

The words of California Republican Rep. Darrell Issa, who became chairman of the House Oversight and Government Reform Committee after the 2011 election, are worthy of recalling. “I want seven hearings a week, times 40 weeks,” he said about the Obama administration. Issa issued more than 100 subpoenas by the time he had to leave office because of term limits. That’s a good number for the Democrats to start with.

A possible list of investigations could include the separation of children from refugee-seeking mothers, putting a citizenship question on the census, rescinding security clearances of critics, administration officials using private emails and foreign interference in elections and the voter suppression that has been rampant for years, including on Tuesday.

Another good place to start for the incoming House members, many of whom are of a later generation and progressive, is a review of the incoming House leadership. Trump did not tweet out of the goodness of his heart Wednesday morning that Nancy Pelosi deserves to become Speaker.

Voters elected more than 115 women to Congress and governorships. They include Alexandria Ocasio-Cortez of New York, who will be the youngest member of Congress, as well as, for the first time, two Native Americans. Sharice Davids, an attorney and former MMA fighter and a lesbian from Kansas, raised by a single mother army veteran, is a member of the Wisconsin-based Ho-Chunk Nation. Deb Haaland, a citizen of the Pueblo of Laguna tribe in New Mexico, is a long-time political activist.

Other first-timers include two Muslim women. Rashida Tlaib is a Palestinian American who served on the Michigan state legislature from 2009 to 2014. Ilhan Omar, a Somali American state representative in Minnesota, won the seat vacated by another Muslim, Keith Ellison who was elected the state’s attorney general.

It was a good day also for the LGBTQ community, so much so that some observers referred to it as the “rainbow wave.” Most notably, Jared Polis of Colorado became the first gay man to be elected governor. Tammy Baldwin from Wisconsin, the first openly LGBTQ U.S., senator, was re-elected , as was Kate Brown, governor of Oregon, a bisexual who became the country’s first openly LGBTQ governor in 2015.

Gillum did not win and Stacy Abrams may not be elected as governor of Georgia and there was not much of a “blue wave” but a diversity wave certainly that washed over the election, as a repudiation of Trump and other ethno-warriors clamoring for a white nation. Trump strengthened the Republican hold on the Senate, through fear-mongering through lying but he could not stem the tide of anti-Trump sentiment at the district level enough to retain the House. This, more than anything else, exemplifies just what the two parties have become: one very monochromatic, the other multi-colored.

The next election, in 2020, when the presidency and, once again, the Senate will be at stake, will show whether the nation will reject even more forcefully the politics of divisiveness and falsehoods aimed at terrifying whites into greater tribalism or a country that sees virtue in a melting pot culture.