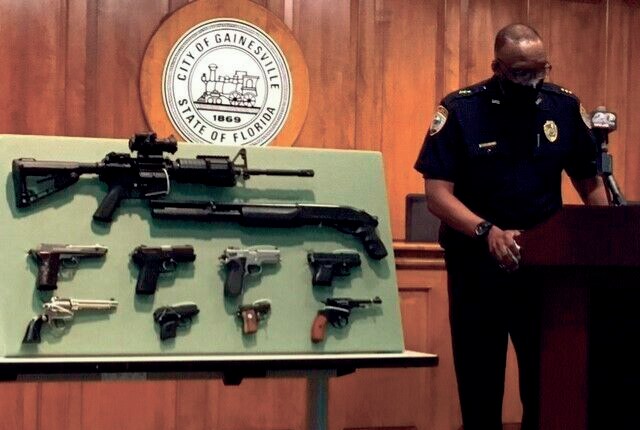 GAINESVILLE, Fla. (AP) – Two Gainesville Police Department ofﬁcer positions could be frozen next ﬁscal year to free up funding for salaries for two employees to prevent violence in Black communities.

The City Commission scheduled on Thursday was scheduled to vote on a proposal for the city to spend $105,000 for the salaries of two “Black-on-Black violence interrupters.”

The interrupters were proposed to work with the Black on Black Crime Task Force, which for decades has identiﬁed crime and problems that need to be addressed in minority communities. This is providing the staff to implement some of those ideas, Gainesville Police Chief Tony Jones said.

“It is community driven,” Jones said. “They will be doing conflict mediation. They will also be working with some of the individuals who have a propensity for violence and actually get out and mobilize the community.”

These will be the ﬁrst two hires in the program. The police department is expecting to get state and federal grant money to add six more “interrupters” in November, Jones said.

The mission is to engage community leaders, local business owners, faith leaders, service providers, and at-risk individuals that violence should not be viewed as normal but as behavior that can be changed, the staff report to the commission says.

Darry Lloyd, the public information ofﬁcer for the State Attorney’s Ofﬁce who is the moderator of the Black on Black Crime Task Force, said local law enforcement agencies are all signiﬁcantly down on staff, and programs like this one can only help make the community safer.

“I think across the country agencies are thinking outside the box to see what works,” he said. “I don’t believe it takes away from what we call `the patrol function’ of law enforcement. You always have a need to have patrol ofﬁcers engaged in community policing.” Jones said the violence interrupters are important for various reasons.

“With the violence we have in the community, they are going to be essential as outreach workers to try to resolve some of the conflict before it erupts into violence,” he said. “Number two, they will work with some of the most violent individuals we have out here to try and get them jobs – so they won’t commit crimes or cause violence within the community. And number three, they will assist and mobilize the community to speak out against violence in their neighborhoods”

“This program has been around on experimental basis working with the Black on Black Crime Task Force for about a year now,” Jones said.

Even though the two police ofﬁcer positions would be frozen in ﬁscal year 2022 to create the funding for the interrupter positions, the positions could always be ﬁlled at a later date, Jones said.

“We didn’t eliminate the police ofﬁcer positions,” Jones said. “We have a number of (ofﬁcer) vacancies and we’ve placed those positions on hold.” The city is funding the positions through an agreement with the nonproﬁt Black on Black Crime Task Force Inc., and the interrupters will work out of the police department building but not be police employees.

John Alexander, the youth and community relations bureau director at the Gainesville Police Department, said the interrupters in the ﬁrst year have had a good rapport with the Black community, perhaps even better than police ofﬁcers.

“These people have to have credibility in the neighborhood and areas where they work,” he said. “I think that is critical.”

Preventing violent retaliation is among their many duties, Alexander said.

“If there is a shooting or something like that, we want to make sure there is no retaliation,” he said.

Gainesville Mayor Lauren Poe said the violence interrupters are a “new, proactive approach to community policing.” “Instead of responding to a 911 call, our interrupters work with our neighbors to ensure that a crime never happens in the ﬁrst place,” he said in a text message.