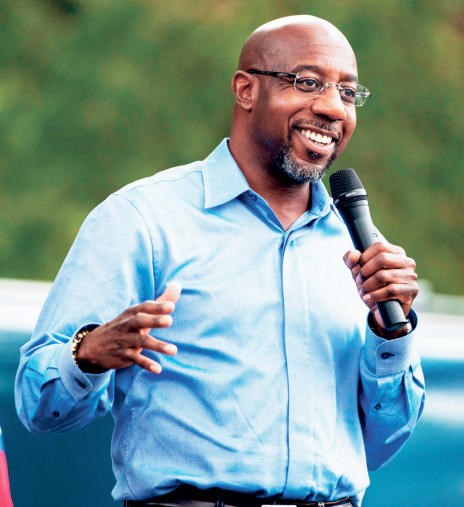 When the history of this period in the life of the United States of America is written, let it be recorded that it was two African Americans who saved democracy and enabled the process of disinfecting its politics.

The process started when 80-year-old Democratic Congressman Jim Clyburn of South Carolina endorsed the failing candidacy of Joe Biden in April, three days before the state’s presidential primary, injecting into his campaign a lifesaving shot of political adrenalin. “I am fearful for the future of this country,” Clyburn said at the time. “I’m fearful for my daughters and their future and their children and their children’s future.”

Biden, of course, went on to defeat Donald Trump. But his victory was due substantially also to the work of another African American whose political activism enabled him to clinch his victory by 11,779 votes in another state.

Stacey Abrams, a 47-year-old Georgia activist, was responsible for registering some 800,000 new voters in her state. They most likely played a key role not only in Biden’s win but also the victory of Democrats the Rev. Raphael Warnock and Jon Ossoff over two incumbent Georgia senators in the runoff election on Tuesday.

Victory by both Warnock and Ossoff victories increases the number of Democratic senators to 50, equaling the number held by Republicans. Incoming Vice-President Kamala Harris will preside over the Senate, as needed, effectively putting Democrats in control and – they will say this cannot be overemphasized – ousting the politically reprehensible current Majority Leader Mitch McConnell of Kentucky.

For Clyburn, it was a matter of exerting influence accumulated over nearly three decades as a Congressman. For Abrams, it was payback time for the theft of her chances to become governor.

James E. Clyburn, elected to the House in 1993 from South Carolina’s sixth congressional district, is Majority Whip, the third-ranking Democrat in the House of Representatives and chairman of the House Select Committee on the Coronavirus Crisis. His endorsement of Biden evidently galvanized South Carolina’s African Americans, who account for 27 percent of the state’s population, to vote for him.

Clyburn apparently envisaged that the best person to end the horror that was the Trump presidency was to throw that considerable influence behind the candidate whom he determined to be best able to defeat the incumbent. That Biden went on to win proved his assessment was correct

But while Clyburn kept Biden’s candidacy alive, it was Abrams who enabled him to complete his journey to the White House. Abrams served five terms as a member of the Georgia House of Representatives, serving as minority leader for eight years. She ran for governor in 2018, the first African American woman to become a major party’s nominee for governor.

Abrams lost by about 57,000 votes or 48.8 percent of the 3,939,328 total cast, and she rightly blamed her loss to massive voter suppression attributed to the winner, Brian Kemp, a Trump ally. Kemp, then secretary of state, oversaw elections in Georgia and refused to step aside to avoid a conflict of interest. His office nullified 1.4 million voter registrations in recent years, including 500,000 in one night in July 2017. That move "may represent the largest mass disenfranchisement in US history,” The Atlanta

Journal-Constitution quoted election law experts as saying. Joan Walsh noted in The Nation that Kemp also closed several polling stations and relocated others, which“cost as many as 85,000 Georgians their ability to cast a ballot.”

Abrams considered but did not sue. Instead, during her speech ending her campaign, she announced that she was launching Fair Fight Action and the Fair Fight political action committee especially to register and turn out voters in Georgia and around the country. By the time of the presidential election last November, Abrams and her organization had registered “more than 800,000 new voters in the once red state,” The Hill reported. She raised $6 million for Warnock and Ossoff.

So it is two African Americans who have helped put Democrats in control of two of the three branches of the federal government – the presidency and Congress. With Democrats already in control of the House, they have made it possible for Biden to pursue a progressive agenda, if he so wishes, without the stonewalling that President Barack Obama, with whom he served as vice president, encountered with McConnell in charge of the Senate.

In any case, they also have, at least for the time being, halted the surge in the United States of autocratic tendencies fueled by the European American nativism and outright racism which are plaguing Europe.

To be sure, this is probably just a temporary reprieve, given that Trump is unlikely to slink into the oblivion of sitting in an office with a prominent sign reading, “All I need is 11,780 votes.” But Biden has pledged to conduct the affairs of state in a way that will remind Americans what political sanity means. For this he and the nation owe a debt of gratitude to Clyburn and Abrams.