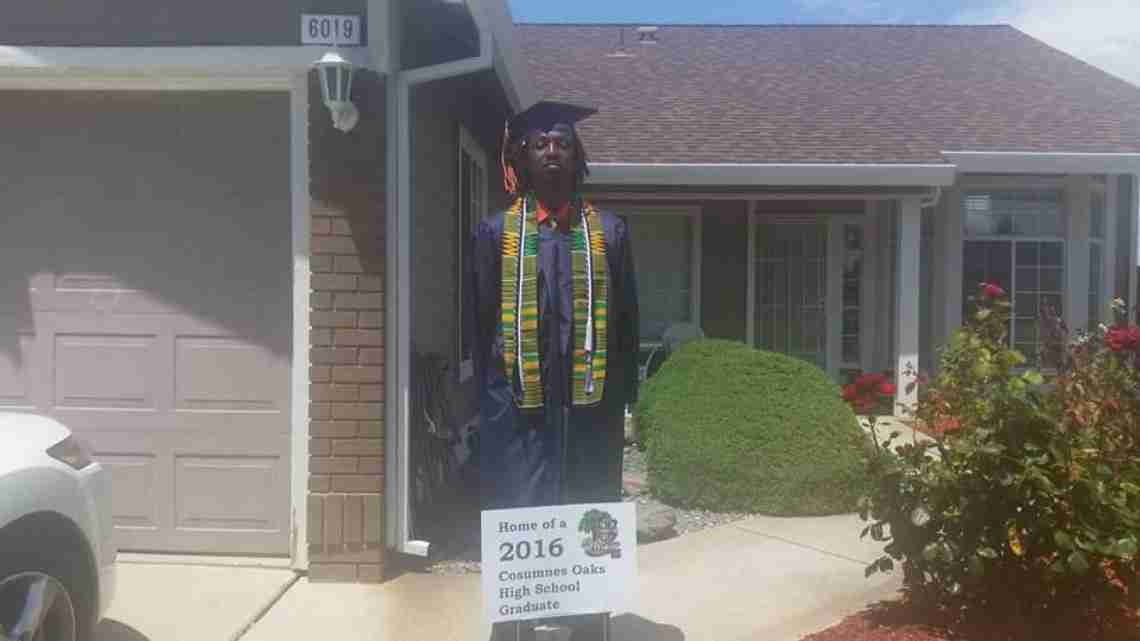 SACRAMENTO, Calif. – A black teenager says he was escorted out of his high school graduation ceremony in Sacramento by three deputies for refusing to remove his kente cloth, a traditional Ghanaian silk and cotton fabric.

Nyree Holmes said Saturday that he wore the decorative cloth atop his graduation robes to have something with him that represented his culture during the ceremony at Sacramento’s Sleep Train Arena on Tuesday.

“The kente represents my cul- ture that I have no other links to,” Holmes told The Associated Press in a telephone interview. “I wanted to show I’m proud of who I am and that as the descendant of slaves, I represent Africa and my ancestry.”

But Holmes, an 18-year-old student from Cosumnes Oaks High School in Elk Grove, California, said the school’s student activities director wouldn’t hear his arguments and told him he was violating graduation dress requirements, which only allow decorating caps and gowns with medals, cords or pins received though the school.

Holmes said he tried to have a dialogue with him, but the activities director instead tried to prevent him from walking onstage. “I understood the rules. But I feel if he would had heard what I was saying, I may have just put it in my pocket and wait until after graduation to wear it,” Holmes said. “But I felt that he wasn’t listening to what I was saying or respecting my opinion.”

Holmes walked the stage wear- ing the kente and shook hands with the school principal, Maria Osborne, and other administrators. But as he walked down the stairs, three sheriff’s deputies waited for him to escort him out. A security guard later helped him to get back into the arena to retrieve his diploma and returned the loaned cap and gown, he said.

Osborne met with his parents and apologized for the incident and he too, plans to meet with the activities directornext week, he said. Elk Grove Unified spokeswoman Xanthi Pinkerton told the Sacramento Bee on Friday it was unfortunate that Holmes was escorted out of the commencement.

“We would have preferred that the student would have complied. We wouldn’t have even gone here with that. It would have been nice not to have the image of a police escort,” Pinkerton said.

Holmes he would like the school’s rule on graduation attire change to reflect how much Elk Grove has transformed over the years.

“This neighborhood has gone from a farm town to a bustling small urban city that’s building up and growing,” he said. “I understand not wanting people to dazzle their caps with random words or wear neon pink sashes and crazy things. But they need to adapt it to accept cultural items.”

Next post Winfrey explores megachurch drama in OWN series ‘Greenleaf’