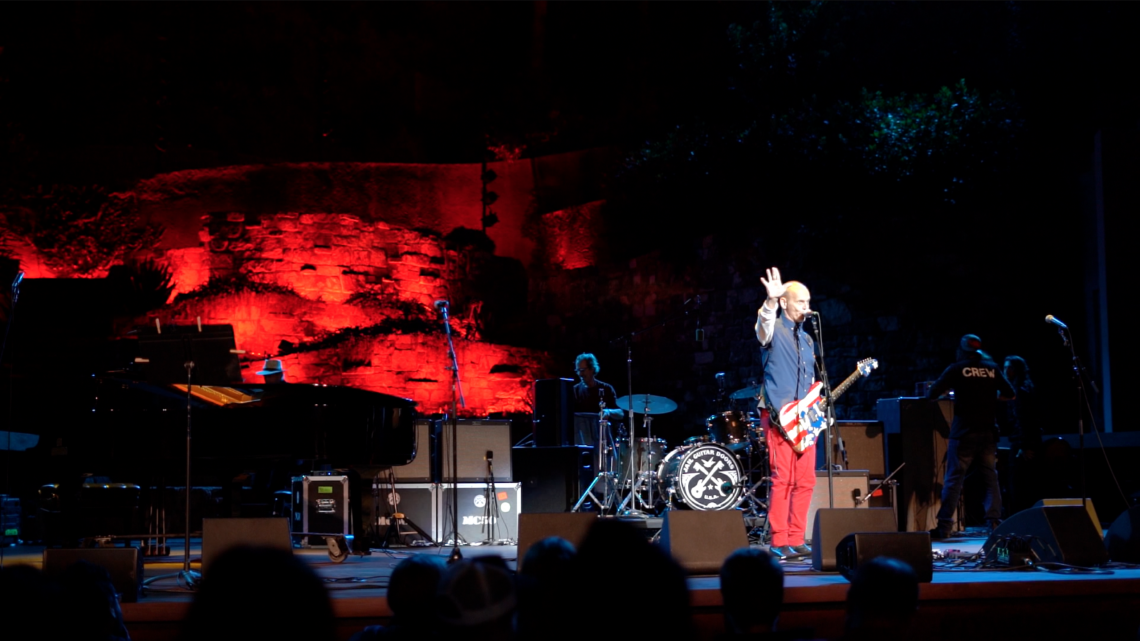 “Let me tell you ‘bout Wayne and his deals of cocaine. A little more every day,” the Clash sang in 1978. “Holding for a friend till the band do well. Then the DEA locked him away.”

The song, “Jail Guitar Doors,” was about guitarist Wayne Kramer—who at the time was wrapping up a prison sentence in Lexington, Kentucky for selling cocaine to an undercover federal agent. Kramer played Sunday sets in chapel there with trumpeter Robert “Red Rodney” Chudnick, who was famous for being the only white member of Charlie Parker’s bebop quintet.

Kramer is now back in prison 42 years and hundreds of guitar picks later—but only on Tuesdays. He teaches songwriting at the Los Angeles County Men’s Central Jail, one of the world’s largest lockups.

“Prison is designed to strip you of your humanity. We’re fighting that. In prison, they say you have no worth. We don’t believe that. Racism, bitterness, violence—that’s what prison teaches you. We’re fighting that,” Kramer says of his volunteer work with a program named after the Clash’s ode to him.

“Prisoners all have a story to tell, and we encourage them to express complex, sometimes painful emotions, and in a way that brings beauty into the world [that] they can be proud of,” he says. “Most people in jail never have someone tell them, ‘Man, that was a great idea.’ For anything, ever.

“So to hear that changes everything,” he says. “To be encouraged to tell your story and express what’s going on, that’s transformative.”

Kramer’s claim to moderate fame was with a 1960s Detroit proto-punk group called MC5. Despite having an audio engineer who worked on the Doors’ albums and a guitarist who married the fast-rising Patti Smith, the group never managed to compete nationally with the Bob Seger System. Or the Amboy Dukes, Ted Nugent’s group, which battled with them for stage time during the ‘60s.

MC5’s anti-authoritarian single “Kick Out the Jams” peaked at No. 30 on the charts. Kramer’s studio in L.A. has a plaque commemorating Blue Oyster Cult’s cover of the song on its 1978 platinum-selling live album Some Enchanted Evening.

For Kramer, life after his band fell apart was a revolving door of addiction and robbery, which landed him behind bars and ultimately inched him toward sobriety. After his narcotic haze lifted, he looked at prisons like the one where he used music to process his pain and saw a dramatic shift away from rehabilitation—and toward harder time.

“In the decades after I was released, I saw that people committing the exact crime I did, and got four years for, were now getting life in prison for the same offense,” he says. “I thought, Someone has to do something about this.”

He continues, “People in prison are exactly like you and me. They have the same hopes, the same fears, the same ambitions, relationships with others. And if we continue at the rate we’re going, we’re creating an underclass that is disenfranchised from their friends, family and community, and that serves no one except people who profit from the prisons.”

Kramer had a stable life—a marriage, an income and a direction—when he played at a 2009 concert for inmates at the infamous Sing Sing prison in Ossining, New York. In between sets with Iggy Pop, Alice in Chains founder Jerry Cantrell and Bruce Springsteen’s E Street Band guitarist Steven Van Zandt, he asked British singer-songwriter and progressive activist Billy Bragg about a “Jail Guitar Doors” logo on his instrument case.

Bragg said it was the name of a program he had started in the United Kingdom to bring music into prisons. He named it after the Clash song but didn’t know the hard-driving track’s opening lyric was about the man he was talking to.

Its chorus could just as easily have been a Johnny Cash refrain: “Clang, clang, go the jail guitar doors. Bang, bang, go the boots on the floor. Cry, cry, for your lonely mother’s son.”

Bragg told Kramer that his past and his passion made him the only person suited to replicate the British group’s work in America.

Kramer and his wife, Margaret, knew in 2009 that America’s jail population was skyrocketing, with the world’s highest incarceration rate and more than 7.3 million people being supervised by correctional agencies—2.3 million of them behind bars. In 2018, the most recent year for which statistics are available, 698 out of every 100,000 people in America lived inside jails and prisons, according to the nonprofit Prison Policy Initiative.)

Jails here have opened up one by one as the Kramers make their pitches—mostly state and local ones, very rarely at the federal level. Benefit concerts add money and PR muscle.

Jail Guitar Doors USA split the proceeds with Project Paint, which gets inmates into art and stages exhibitions of their work.

“Wayne is an institution,” says Moby. “MC5 is the only truly radicalized band. He truly lived it. He’s been through it and knows how to reach these men and women.”

For some inmates, Kramer’s program is the only way some musical uplift finds their ears inside the prison’s drab walls. At the weekly sessions, as soon as the door is closed, they play, they sing, and they breathe.

When Kramer left prison, friends told him about the Clash’s raucous punk anthem dedicated to him. But he wasn’t the only troubled musician the group name-checked on the 1977 recording.

“Keith, waiting for trial” refers to Rolling Stones guitarist Keith Richards, who had been arrested months earlier for heroin possession in Toronto. And “Pete,” who was “certified insane” and “gave all his money away,” was Fleetwood Mac guitarist Peter Green. His LSD trips famously made him mentally stable—and recklessly generous.

The three were Clash singer Joe Strummer’s personal guitar heroes. Kramer lived up to the compliment.

The “Jail Guitar Doors” chorus is a noisy brew of anger and defiance, but the refrain could easily have been a Johnny Cash lyric: “Clang, clang, go the jail guitar doors. Bang, bang, go the boots on the floor. Cry, cry, for your lonely mother’s son.”