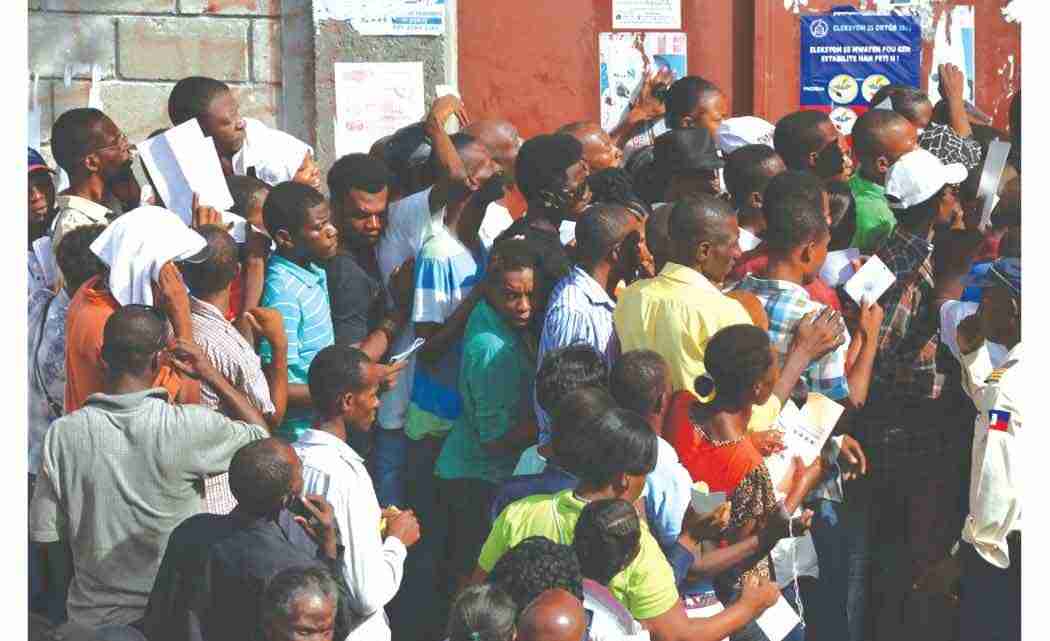 
PORT-AU-PRINCE, Haiti — President Michel Martelly is defending much-criticized elections in divided Haiti and asserts that the opposition has spread unsubstantiated allegations about widespread electoral fraud purely to strengthen its position.

During an interview with The Associated Press, Martelly said he believed that disputed official results showing the government-backed candidate topped October’s first round presidential vote was a genuine reflection of voters’ will.

“We feel confident enough that what happened the first time will happen again because it’s the vote of the people,” the outgoing president said Monday on the grounds where the domed National Palace once stood before it pancaked in Haiti’s 2010 earthquake.

Haiti’s Provisional Electoral Council reported that Jovenel Moise of Martelly’s well-financed Tet Kale party received nearly 33 percent of the votes cast on Oct. 25 in a packed field of 54 presidential candidates. Official results have the agricultural entrepreneur, a political newcomer hand-picked by Martelly, getting 117,602 more votes than second-place finisher Jude Celestin, a former state construction chief who was the government-backed candidate in the last election cycle.

Growing allegations of electoral fraud have brought sometimes violent street protests and so many accusations from civil society, religious and opposition groups that Haiti’s Dec. 27 runoffs were postponed Monday.

For now, no immediate resolution to Haiti’s electoral tensions is in sight. Officials say a new election date won’t be announced until a special commission created by presidential decree can review the electoral process and make recommendations. A five-member commission was installed Tuesday night.

Martelly suggested that critics have wildly exaggerated the extent of irregularities on Oct. 25. On the whole, he said, balloting was remarkably “free and fair” in a country where elections have never been easy and are often marred by violence, intimidation and other irregularities.

He noted that after polls closed, international electoral missions and local groups hailed it as an apparent success. That contrasted sharply with an earlier legislative round in August that suffered from violent disturbances and other irregularities, even though international monitors said they were not serious enough to disrupt the legitimacy of the overall vote.

Martelly said the opposition was so troubled by Moise’ status as the top finisher that leading figures started denouncing the elections as a mockery of democracy. Celestin has called the first-round results a “ridiculous farce.”

“It looked like the potential winner was not what the opposition expected, so the same minute, the same night, they started building that perception” of fraud, Martelly said.

Opposition factions and some observer groups suspect fraudsters used some of the roughly 900,000 accreditations issued for political party representatives to facilitate multiple voting. There are also accusations that electoral council officials accepted bribes to secure spots in runoffs, among other allegations.

The various accusations have raised so many suspicions here and abroad that Martelly, under pressure, announced the creation of the evaluation commission. The idea was dismissed as merely a “cosmetic solution” by the opposition, but Martelly says his priority is a credible final round that will be recognized as legitimate.

In a Tuesday statement, U.N. Secretary-General Ban Ki-moon expressed concern over Haiti’s electoral crisis and called for intensified dialogue “to ensure the transfer of power through elections” within the constitutional time frame.

Martelly, who was prohibited from running for a consecutive term, is due to leave office Feb. 7.

This year’s balloting for nearly all of Haiti’s public offices have been the first elections under Martelly’s tenure. Despite pressure from the U.N., U.S. and others, previous efforts to hold legislative and local votes were snarled by bitter infighting between the executive and legislative branches.

Although Celestin’s opposition alliance has called for resignations at the electoral council and judicial investigations, Martelly said the council, known as the CEP, has proven itself “strong enough and independent enough.” He noted that the body was loudly praised as independent when it rejected first lady Sophia Martelly’s bid to run for a Senate seat.

People said  “that this was the best CEP, particularly at the time that they kicked my wife out of the race,” he said.

Martelly said his main remaining task is handing over the reins to a legitimate government. He said he is seeking compromises with Celestin’s camp, senators and the electoral council to ensure runoffs occur soon, but charged that some opposition factions are trying to derail elections so a transitional government would have to be put in place.