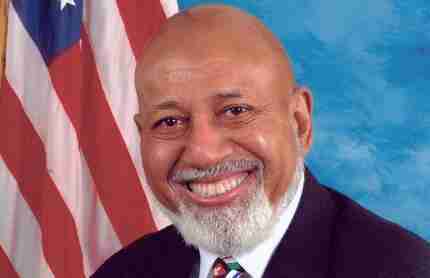 Sheila Cherﬁlus- McCormick, 41, ran against Hastings in 2018 and lost by a huge margin but is back at it again, challenging his competence and his integrity. “We’re still in the same place – stuck in a rut. He is not delivering what the community needs,” said McCormick in a telephone interview last weekend.

The ﬁery McCormick questioned Hastings’ morality. “He is always caught-up in ethical investigations, sexual harassment, nepotism. And his failure to pass effective bills or even get his bills on the floor is problematic,” she went on to say. “He’s been there and not been effective. The community needs someone new.”

McCormick has never held a public ofﬁce while Hastings, despite some missteps, has been voted back in ofﬁce time and time again, either uncontested or by large margins.

When they last faced off Hastings won with 74 percent of the vote. And Hastings refuses to disparage his opponent citing his preference to stay above the fray. “That’s not who I am,” he said in a rare interview despite his health challenge.

Hastings says he’s focused on the critical issues of the day given the coronavirus pandemic. “Unemployment compensation is too low. The senators must remember there’s no place for the people to go to work. Plus I’ve been ﬁghting for $15 an hour for so long, now I want $18 an hour for the people. If we could give a trillion dollars to one percent of this country, why can’t we bail out the American people?”

Hastings points out however that his most important interest is young people, which is why he’s interested in broadband. His concern is that during the pandemic many children of color won’t have access to the internet for virtual learning. “My most effective work has been with young people.”

Meanwhile McCormick, a lawyer and a home healthcare founder, continues to tout change. “Most people just know that things haven’t changed with him in ofﬁce. We need fresh blood,” she said enthusiastically. “At this stage, I don’t believe it’s about the people with him. Everyone knows I can do the job.”

But Hastings’ seniority in Congress and his longevity seemingly speaks for itself. His ﬁrst attempt in politics came in 1970 but in 1979 President Jimmy Carter appointed him a federal judge. He has been full steam ahead ever since and has had the support of the people – overwhelmingly. Many say the wealth of experience he brings to the floor of Congress shouldn’t be overlooked. And according to a Palm Beach Post report, Hastings has recently been cleared by an ethics panel after an investigation into a relationship with a staffer. He has reportedly been cleared of wrongdoing.

But McCormick remains undaunted. She says although she has never held ofﬁce, it’s not a liability but an asset.

The Aug. 18 primary will decide.