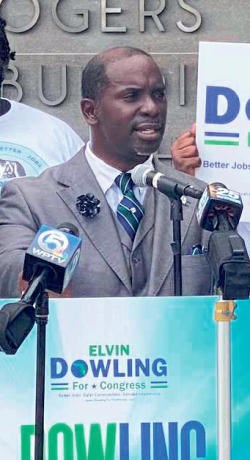 FORT LAUDERDALE, Fla. – A ﬁrestorm is brewing in the race to replace the late Rep. Alcee Hastings in Congress. Until Tuesday, Florida Gov. Ron DeSantis had refused to announce a date for the special election but well known candidates continue tossing their hat into the ring with one dropping a bombshell Friday.

The Rev. Elvin Dowling, one of the many announced candidates, and a newcomer to the political stage, was thrust onto the national spotlight Friday when he announced at a press conference the ﬁling of a lawsuit against the gov. to set a date for the special election for Hastings’ seat. But on Tuesday, DeSantis reversed his inaction and set a special election-primary for Nov. 2 and Jan.11, 2022 for the general election. West Palm Beach Attorney Craig Lawson ﬁled the suit on his behalf. Also, Dowling wrote a Pulitzer nominated book titled, “Still invisible? Examining America’s Black Male Crisis.”

Hastings wrote a sterling foreword. The book won the Florida Book Award and as part of the honor the book is on permanent display at the Governor’s Mansion. Hastings and Dowling enjoyed a 30 year friendship which started when Dowling interned for the congressman in Washington DC. In 2019, the two men attended a Father’s Day luncheon during which Hastings was honored, and they sat at the table together. Dowling said that day Hastings indicated his desire for Dowling to succeed him.

Another candidate running for the seat who has gained national attention is Florida State Rep. Omari Hardy of Palm Beach County. Hardy announced his candidacy for the seat last week. He was featured on the CBS News iconic TV show, “60 Minutes” recently taking on the governor, challenging DeSantis’ rollout of the COVID-19 vaccination in the Black community in Palm Beach County. DeSantis was livid about the story and publicly expressed his anger. Hardy stood his ground. DeSantis had turned down CBS’ request to appear on the show.

Former mayor of Broward County and current County Commissioner Dale Holness, made his entrance into the race with a formal press conference with Hastings’ son, Alcee Jody Hastings, by his side offering his blessing. At the press conference and recently on CNN, Holness indicated Congressman Hastings said to him and others that Holness is his pick to ﬁll his shoes. Holness said he would not have formally announced without the congressman’s support behind him. Jody Hastings spoke on his behalf at the press conference and conﬁrmed his father’s expressed wish that Holness replace him. Two other prominent leaders conﬁrmed that Hastings wanted Holness to take his seat in Congress. Dr. Dorsey Miller said Hastings called him several weeks before his passing and said he wanted Holness to succeed him. Miller said Hastings even asked if Miller would support Holness as well. Additionally Attorney Burnadette NorrisWeeks of Broward, said she spoke to Hastings about a month before he died and he told her he wanted Holness to succeed him. Norris-Weeks had not previously shared Hastings’ comments of support with Holness.

State Sen. Perry Thurston, who once interned for Hastings when he was a federal judge, says as a leader in the State Senate, he could be very effective at the federal level. “I think I’ve prepared myself and this is a logical next step for my service to my community,” he said. “When you have someone as iconic as Alcee Hastings, there’s a lot who want to follow in his footsteps. It’s a reflection of the quality of leadership in him. I’m prepared to provide that kind of bold leadership.” Thurston said he wants to effect change in the community and knows he can do that in the federal seat.

Sheila Cherﬁlus-McCormick has tried twice to unseat Hastings. And although unsuccessful, she believes she has the wherewithal now because she was the only one courageous enough to take on a giant. “I was the only one to advocate and step out. Everyone else was quiet,” said the owner of a healthcare agency. “These are very big shoes to ﬁll. He was a strong and courageous leader. We need someone with Congressman Hastings’ tenacity. Now is our time. Our community needs change. I live it, I see it, and I want to do more.”

Broward County Commissioner Dr. Barbara Sharief points out that she has been Broward County mayor twice, making history as a woman, and she’s served through federal and local issues for 12 years. She is also a business owner with six college degrees. “There’s no one in this race who has my qualifications,” she said. “I can relate to normal people’s issues and help on the federal level. However my proudest achievement is being a mother to my three beautiful daughters.” Her youngest attends Broward Public Schools.

Former Palm Beach County mayor and Commission chair woman, Priscilla Taylor, who also served in state government, has had her eye on the congressional seat for some time. But she believes now is the time. “I’m a visionary who could get things done across party lines. I’ve been a business owner, run budgets, worked both sides of the aisle, started organizations to help deal with social issues. I have the capacity to care and I want to see all persons thrive.” She, too, says she can bring about positive change for the constituency.

State Rep. Bobby DuBose has declared he is running for the seat, but the South Florida Times couldn’t connect with him before press time. Our calls were returned by his staff but still no connection was made.

State Sen. Bobby Powell said he is leaning toward running and will make an announcement after DeSantis establishes an election date. After the election dates were set on Tuesday, we have been unable to reach Powell.