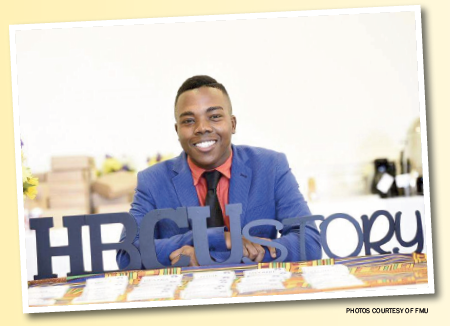 Florida Memorial University, South Florida’s only HBCU, is hosting a conference designed to champion Historically Black Colleges and Universities. Created by Marquise McGriff, a 20-year old FMU sophomore, the conference is scheduled for Feb. 10-12 at the Miami Gardens-based institution.

His wisdom and passion for HBCUs belie his youth. McGriff has already made a name for himself as one of hundreds of HBCU students selected to be a White House Scholar, serving as an ambassador championing the mission of HBCUs. His deep love and passion for his people brings to mind great historical figures like W.E.B. DuBois and Frederick Douglass.

He founded Club 1964, a non-profit organization named in honor of the Higher Education Act of 1965, which designates “any historically black college or university that was established prior to 1964…,”so that HBCU Scholars can do “something about saving the future of our own institutions as a whole.”

Ideally, McGriff wants Club 1964 to become instrumental in replacing the “school to prison pipeline” so prevalent in inner city schools with a “Grade-School-to HBCU-Pipeline.”

Expecting the federal government or even HBCU administrations to save the institutions is futile, McGriff said.

“We can’t continue to

depend on our administrations, whose concerns are the survival of their own individual schools; neither can we rely on outside entities which are continually reducing, and even eliminating, funding to our schools,” he explained.

15 Essence magazine article, HBCU graduation rates are on the decline, fewer students are choosing to attend and fundraising efforts are seriously stifled.

Journalist and HBCU professor, Ron Stodghill writes in his book, Where Everybody Looks Like Me: At the Crossroads of America’s Black Colleges and Culture, the number of the nation’s HBCUs will fall from 104—the current number—to only 35.

The latest HBCU casualty was St. Paul’s College in Virginia, which was forced to close its doors in 2013. It is in this era of HBCUs’ increasingly fragile viability that McGriff wants Club 1964 to function as a motivating vehicle that helps the beloved institutions to not only survive, but thrive.

McGriff says saving the institutions should be a priority.

“I truly believe that our HBCUs are precious jewels that require preservation. Anytime another HBCU closes, that’s a part of our history that’s just that – history,” he shared.

The keynote speaker at the conference is another champion of the HBCU experience, Crystal A. deGregory, Ph.D. deGregory is the founder and executive editor of HBCUstory, Inc., an advocacy initiative preserving, presenting and promoting inspiring stories of the Historically Black College and University’s (HBCU) past and present, for their future.

If it were up to McGriff, every black high school student would be on their way to an HBCU because, he said, “they were built for us.” (Only nine percent of black students choose to attend an HBCU.)

McGriff eagerly shares statistics to bolster the value of an HBCU education.

“Although the 100-or-so HBCUs account for only three percent of the nation’s thousands of colleges and universities, we produce 50 percent of all black teachers and 70 percent of black doctors (dentists and physicians) — clearly, we are doing something right,” he explained. “It has been statistically proven that black students who graduate from HBCUs go on to be more successful and have a better “sense of self.”’

That sense of self, he shared, likely grows more freely at HBCUs because of their “familial nurturing environment and…our professors are top-notch in their field of study,” he said.

While he’s been comp-ared to great men like Martin Luther King Jr. and President Barack Obama, the man for whom McGriff holds the most respect is his father.

“My dad isn’t the most ed-ucated, poised, or eloquent, but he is a walking well of knowledge. No matter how many books I read, classes I go to, or conferences I attend, he always seems to know more than me.”

Next post In honor of Black History Month, check these out!