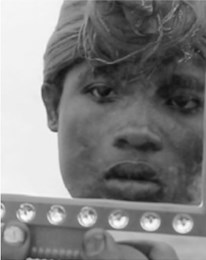 Each year, thousands of young Sierra Leoneans go on ‘temple run’ to escape poverty and chronic underemployment. They use the services of fraudulent ‘agents’

who require them to pay big money for fake job or study abroad opportunities. Inspired from the popular mobile phone game, the idiomatic expression ‘temple run’ describes the risky journey young Sierra Leoneans — some of them victims of trafficking — take through the desert and the sea.

In 2015, Mariam was a hotel manager in Freetown, Sierra Leone’s vibrant capital city. She earned 600 000 Leones per month, about 100 USD back then, barely enough to take care of herself and her infant son.

One day, she heard from a friend about “someone who could give [her] a good job abroad.”

“At the time, I did not know the tactics used by traffickers,” she says. “They ask desperate youths to give huge sums of money in return for a one-way ticket to a better life,” she added.

When the opportunity to leave Sierra Leone knocked on her door, she seized it.

To fundraise for her journey, Mariam took a 2,500 USD loan from a micro financing institution. She gave the entire sum to the “agent” who promised to take her to Australia.

She hoped to work for some time and then come back to Sierra Leone to take her son, so they would live together in Australia.

In Kuwait, Mariam worked without salary for nine months before being sold to another family where the ‘master’ tried to rape her several times.

Eventually, Mariam ran away and sought help from the Sierra Leonean embassy which helped her to return home.

Four years later, Mariam, 33, is back in Sierra Leone. As one of the seven outreach staff of the Freetown-based Advocacy Network against Irregular Migration (ANAIM), she has shared her story with many Sierra Leoneans to raise awareness on this risk of falling in the hands of unscrupulous dream merchants.

For her, sharing some of the most difficult moments of her life with her peers is a form of healing.

“Even though sometimes it is difficult, every time I think about my experience, I want to share it with my colleagues who may be tempted to temple run,” Mariam says.

A COMPLEX AND TROUBLING ISSUE Evidence of the phenomenon is often hard to come by because of the shame and stigma survivors, especially women face, as well as the difficulty of reporting on such a sensitive topic.

Reported cases are hardly prosecuted because the victims often have to travel from remote regions to the capital city to testify at their own cost. Coincidentally, there has been no conviction for trafficking or trafficking-related offenses since 2011.

Human trafficking in Sierra Leone is driven by unemployment and underemployment among the country’s youths.

More than fifteen years after the civil war destroyed the country’s economy, Sierra Leone has one of the highest youth unemployment rates in Africa.

Despite visible economic growth in the past decades, many young Sierra Leoneans are out of work, or like Mariam, they earn barely enough to meet their needs. Families fractured by the 2013– 2016 Ebola crisis still struggle to put food on the table and send children to school.

The crisis forced the closure of several iron ore mines — Sierra Leone’s primary export commodity, and the dissolution of many businesses that were suppliers to the mining operations.

“When an opportunity, especially to go abroad, is presented, most young people seize it because they presume, they do not have a better alternative,” says Sanusi Tejan Savage, Head of the International Organization for Migration (IOM) Office in Sierra Leone.

The ambiguity of human trafficking also means that sometimes, people do not know that they are being trafficked, or that what they are doing is a form of trafficking.

“Sending a child from a rural town to live and work with a next-of-kin in an urban or work-intensive area is common practice for many families,” explains Savage. “What we see as a form of child trafficking, families see it as a way to increase their income,” he adds.

Raising Awareness When she returned to Sierra Leone, Mariam joined the Advocacy Network against Irregular Migration, an association formed by a returned migrant, Sheku Bangura, who had attempted unsuccessfully to reach Europe through Libya.

In the premises of the association located in the Eastern area of Freetown, registration certificates and pictures from past outreach events hang on the wall.

More than 1,400 Sierra Leoneans including survivors of trafficking stranded in Mali, Burkina Faso and Niger, have returned with IOM’s assistance since November 2017 in the framework of the EU-IOM Joint Initiative for Migrant Protection and Reintegration.

Sheku was one of them. After six difficult months in Libya, he gave up on his dream to travel to Europe and decided to return home in an IOM chartered flight from Tripoli. He founded ANAIM with his reintegration grant, hoping to help other young Sierra Leoneans not fall into the trap of deceitful smugglers and traffickers.

Since its founding, the ANAIM has become a safe space where returned migrants and survivors of human trafficking can hope to find support.

The association is self-funded so Sheku pays for all the expenses related to outreach activities from his salary as a teacher.

“We went through similar experiences, so we rely on each other for both moral, emotional and sometimes material support,” Sheku explains.

“Being part of the association helped me get through difficult times,” admits Mariam.

“I hope my story will inspire others and help change their minds.”