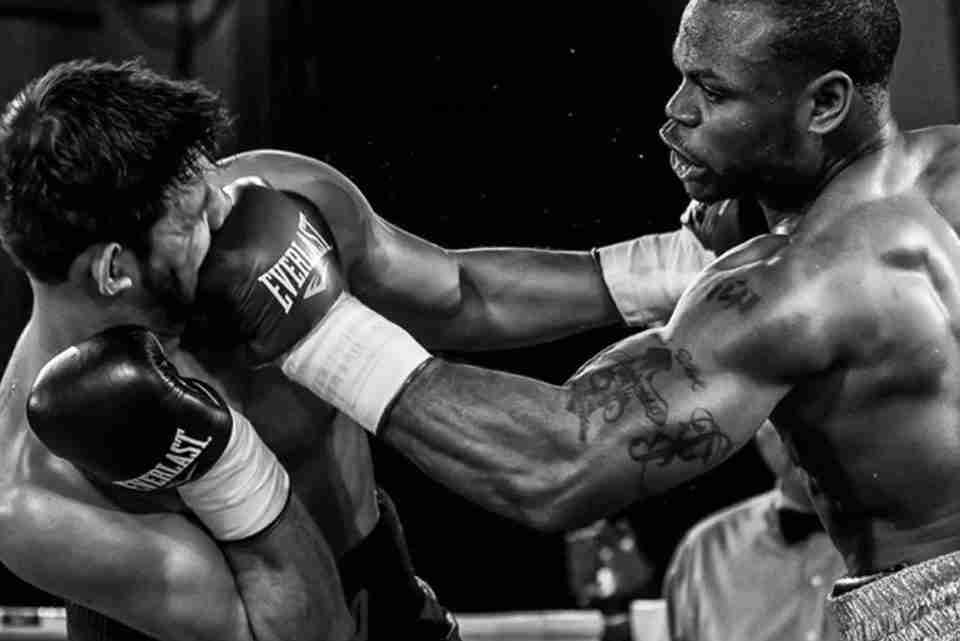 Weigh-in day is a boxer’s second most demanding public ritual. Fighters slim down for a photographed stare-down, and then only have 24 hours to rehydrate and mentally prepare. Standing nose-to-nose with the undefeated fighter Steven Nelson, the last thing DeAndre Ward expected to do was save someone’s life.

Ward splits his time between training and working as a firefighter and paramedic. He shifted gears when Pete Susens hit the floor.

Susens, a fight coordinator for Top Rank Promotions, had collapsed from what looked like a heart attack. He stopped breathing and had no pulse. Two fight doctors leaped into action. So did Ware. He started administering CPR alongside the physicians—chest compressions and mouth-to-mouth breathing—and resuscitated the man.

Top Rank Promotion rewarded Ward with a bonus. He lost his fight the next night, but had already fulfilled his purpose in flying to Las Vegas, before the opening bell sounded.

Ware, now with a record of 13-3-2 with 8 knockouts, finally got his championship belts in 2019, capturing three vacant titles in the super middleweight weight class with a majority decision over a then-undefeated fighter, Ronald Ellis.

Zenger News: The talk of the weekend revolved around your heroic efforts. You’re preparing to weigh in, and then a fight promoter goes down. You spring into action and shift gears. Boom!—You’re an EMT. Tell us what happened.

DeAndre Ward: I had just got done doing my medicals. I was looking for my coaches. I find one of my coaches and I heard some commotion. I was like, “Is somebody fighting or something?” It’s around fight time, people are antsy, hungry and fighters pass one another in the hallways. So that’s what I’m thinking. At first, I wasn’t going to walk in there, but my coach walked in and I went in behind him. And I see Pete [Susens] lying on the ground. I’m like, “Ah man, Pete must have passed out.”

I don’t know what happened, but he looked pale. The doctor was checking him out. It happened pretty fast, but I was kind of torn because I knew I was fighting, I see two doctors there, but it was like, “Do they need my help?” I didn’t know what to do because there was two doctors there. I let them know that I was a firefighter/EMT and I asked if they needed my help and needed me to do [chest] compressions. … They asked for my help, so I started doing compressions.

They said Pete didn’t have a pulse and he wasn’t breathing. That’s what made me want to do the compressions. Once they gave me the okay to do it, I started doing compressions. After doing compressions for a little while, Pete started to have agonal respirations [gasping]. He was barely breathing, but he was having little respirations. We called to get a defibrillator. I asked them for oxygen, but they didn’t have any oxygen at the time. They finally came with the defibrillator and we gave him a shock, which brought his pulse back, but he wasn’t getting any oxygen to the brain. So, he started to decline again. He lost his pulse again, so I started back on CPR.

A few minutes later the Vegas fire department ended up coming. They hooked him up to their machine and gave him oxygen. He started to come through. He was alert and answered some questions they were asking him. They got him and took him to the hospital.

Zenger: How long have you been a firefighter?

Ward: I’m basic EMT trained to things like CPR, checking for pulses and giving oxygen. Stuff like that. I’ve been on the fire department for seven years.

Zenger: Did you personally know Pete?

Ware: I met Pete for the first time the day prior. I knew who he was. My coach talked very highly of him. That was my second time seeing him, but I had met him that Thursday.

Zenger: That’s a chance meeting. You meet a guy on Thursday and save his life on Friday. Top Rank appreciated your efforts. They announced they were giving you a bonus, but this was reactionary for you. I know you didn’t do it for any recognition, but it has to feel good to be able to keep someone alive.

Ware: Yeah! It made it that much better even though I didn’t get the win. I was there to fight. I was there to get the victory and get the win, but after I saved Pete’s life—that’s all I needed, honestly. I’m not going to say I didn’t care about the fight anymore because I did. I wanted to win and get that title to get myself further ahead in my career. But just saving that life did so much more for me. Even coming home—I mean, yeah, I was talking to my coach yesterday and it’s like, it’s almost like someone just died because I just lost. It hurts, but my spirits are up. I knew I was there for a greater purpose. I saved a life. I was able to talk to Pete yesterday, and I got to hear his voice and that made me feel real good. Being able to do that on your own and knowing you were able to save someone’s life, we do it on the fire department, but I didn’t have no equipment. I didn’t have anything. I just went to my instincts and got the job done and helped save a life. That means so much more to me than winning a fight.

Zenger: There is nothing you could have done during that fight Saturday that would have topped what you’d done backstage Friday.

Ware: Right! No doubt about it.

Zenger: As a firefighter, you understand that there is a bigger purpose for you than boxing, but to have it confirmed in that manner? I think it’s a lesson that everyone can learn from. … You saved what was essentially a stranger’s life.

Ware: I just hope that maybe I can be some type of inspiration. Just bring people and this country together more. I mean, I don’t know Pete. I could have said, “Forget it. I’m here for a fight.” I could have not wanted to risk doing anything because when I was doing compressions, they didn’t really want me doing them because I was dehydrated because I was about to weigh-in.

They didn’t want to take me away from my fight, but I was thinking to myself, “I don’t care.” I never had that thought process like, “I don’t know him, he’s a white guy,” or anything like that. But that’s not me. That’s not how I feel. Even with all the things going on, all the talk of Black Lives Matter, no. I can’t let this man die. This is a time for everybody to get together and come together as a country.

Zenger: You had a fight to focus on. You had a built-in excuse to say, “That’s not why I’m here,” and you chose to do what’s right. If only more people just did what was right!

Ware: I took that oath to be there, whether I’m on shift or on duty or not. I took that oath and I carry that sense of pride with me through everything that I do. And it’s not just the job, it’s just me as a person. That’s just how I am. I’m there. I like to help people. That’s part of the reason I’m on the fire department. The motto at my high school was, “Being a Man for Others.” I’ve been applying that. I had it before I went to St. John’s, but that made it stick with me.