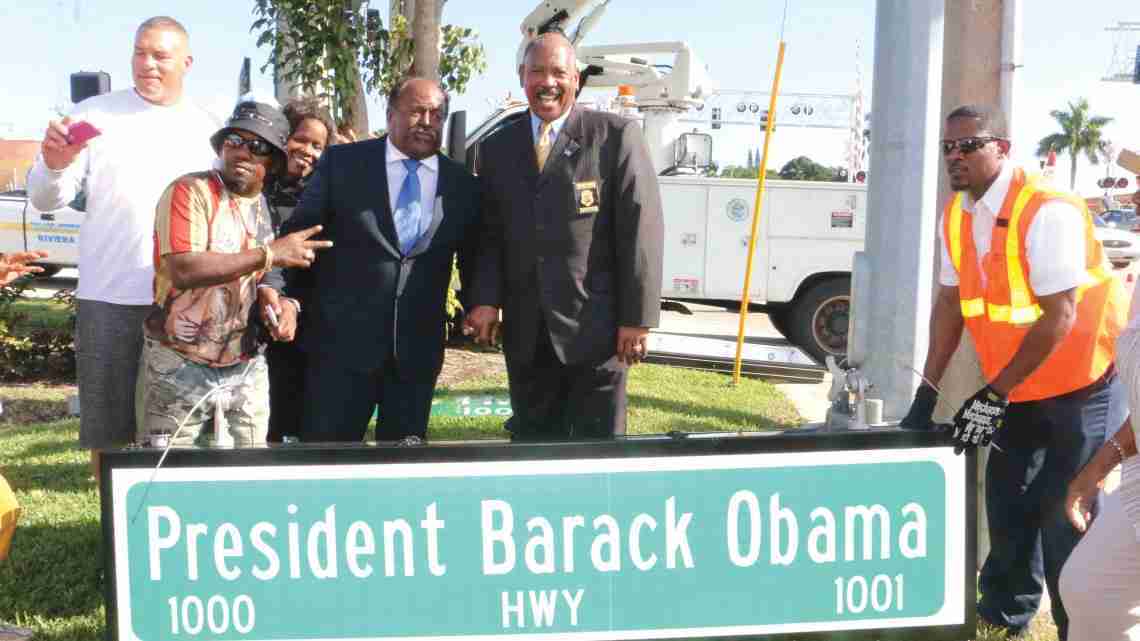 RIVIERA BEACH. Fla. — On December 17, many residents of the predominantly black city of Riviera Beach witnessed something they never thought they’d see: the street sign of the first black president raised high above, hovering strategically over their city. At one intersection, Dr. Martin Luther King, Jr. Blvd. –there’s now the cross section where the beloved civil rights leader  and President Barack Obama Highway meet and intersect. It’s something that brought tears to the eyes of the mayor who envisioned it and initiated it all.

Riviera Beach Mayor Bishop Thomas Masters made a promise at last year’s MLK Parade that by the next year, the parade participants would march across ‘President Barack Obama Highway.’ And he has made good on that promise. On last Thursday, the signs of “Old Dixie Highway” came down, and the President Barack Obama Highway signs went up, signaling a changing of the guard in the city of just over 30,000 residents.

It’s a new day in Riviera Beach, said many of the residents who attended the special ceremony marking the street name change. They danced and shouted to the song, Celebration, by Kool and the Gang, as they congregated on the corner of Blue Heron Boulevard – the city’s main thoroughfare, to watch history in action.
But as the mayor shared, it wasn’t just any street in the city that would be named after the president. It was strategic that it was “Old Dixie Highway.”  It’s a street that signified slavery, hatred, division and racism, during times of old, said Mayor Masters. And 88-year old Dora Mae Johnson, who attended the name change ceremony Thursday — had been around to see it at its worst. She witnessed firsthand, a cross-burning on Old Dixie Hwy in her younger days. “That meant the KKK was coming later that night,” said Masters. As a symbolic gesture, he presented the ‘Old Dixie’ signs to Johnson to “do whatever she wanted to do with them.” She graciously quoted Scripture – Psalms 19:14 and thanked the mayor. She was grateful to still be around to see the changing of the guard in Riviera Beach. “I’m very happy,” she told the mayor.

Masters said changing the name was something he couldn’t shake. “Something was very wrong with having a street named ‘Old Dixie’ running through our city. The street once separated the blacks from the whites. It was the dividing line,” said Masters. “The idea to change it, just wouldn’t leave me.”
It was a year ago when he had the idea, but the name change needed a vote by the city council. In August, the predominantly black council voted for the change. The vote passed 4-1 with Dawn Pardo, the only white councilperson, voting against it, saying the road was too full of blight.
But the Mayor disagreed with those who felt the road wasn’t fitting for President Obama. “This road means so much,” said Masters. “It represents so many different things and people. It represents churches, small businesses, the railway, international business, the hospital and the cemetary –all on this road. It just means so much.”
The majority of the residents loved the concept too, and now they’re praising their mayor for making it happen. Many of them are calling for him to be re-elected in March, when he runs for his fifth term. Resident Margaret Shepherd said he has her vote. “The mayor has made a believer out of me. Let’s vote for him again.” Resident Earl Davis said he too, will be supporting the mayor in March, but he wants to see more done for the highway, now that it’s named after President Obama. “Now, let’s give the street a face-lift. Now that it’s named after our first black president, let’s lift it up. It’s a great thing for our city and please vote for our mayor again,” he quipped.
But the mayor praised the city council, saying it was a collective effort. It was Masters, however, who collected over 2,000 signatures on a petition supporting the street change. Many call him, “The People’s Mayor,” because they say he seems to get things done for the people.
Masters said it’s all about history and  the city’s future. “We are now in the midst of history. We now have the first African American president and we honor him. We are also perhaps the only city in the U.S.  where Dr. Martin Luther King, and his son –Barack Obama, would shake hands together!” he said, referencing the two roads of the two historic black leaders intersecting.
As the Old Dixie sign was being lowered, the Mayor took the microphone and sang the words, “It’s been a long time coming –but a change has come!”

Previous post Are you ready for the best year of your life?