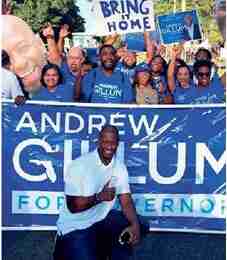 TALLAHASSEE, Fla. – Walking a parade route isn’t a new concept for politicians, but there was a particular significance when Andrew Gillum participated in Florida A&M’s homecoming celebration.

Gillum began his political career as a student at the historically black university and he returned home Saturday as Florida’s first black nominee for governor. The Democrat was given a hero’s welcome as he walked the homecoming parade with his wife R. Jai and their children. The crowd roared as he bounced to each side of the street as campaign volunteers tossed candy to children along the route. He hugged supporters, held children and posed for selfies – lots of selfies.

And the history he could make if he wins in November wasn’t lost on the crowd.

PARADE, FROM 1A “You’re going to do it!” exclaimed 49-year-old Latreva Stallworth, sitting with her granddaughter on her lap as Gillum greeted her. “I’m praying, Baby! I’m praying! Yes, Lord.”

Gillum was 23 when he became the youngest person elected to Tallahassee’s city commission while attending Florida A&M in 2003. He decided to run after organizing a protest over a local rooming house ordinance that said no more than three unrelated students could live in a building. He remembers after he and other students gave their argument, a commissioner made a joke that students were like houseguests. “We like to have you come, but we can’t wait to see you go,” Gillum recalled the commissioner saying, prompting laughter from the other officials.

“It just sort of pricked me, and I thought, `You know what? I’m running for city commission,”’ said Gillum, now 39. “I remember it like it was yesterday. Our slogan was `A chance.”’ Gillum, now Tallahassee’s mayor, shocked political observers when he won the Aug. 28 primary for governor. He was far outspent by his opponents and had the least presence on television. He’s now facing former U.S. Rep. Ron DeSantis for the seat Republican Gov. Rick Scott is leaving after two terms.

Since Gillum’s primary victory his campaign has built an enthusiasm around the state. But Saturday’s event was even more special for Florida A&M students and alumni. Stallworth beamed as she talked to Gillum, and later said that his nomination reminded her of when Barack Obama was elected the first black president.

“It’s just echoing what happened in history with President Obama,” she said. “It’s the same feeling, almost as if, here it is again – our people. But not only just our people, but for all people.”

Gillum is aware of the history he can make, but he’s sometimes reluctant to talk about it.

“We try to keep it in perspective about what this moment is. I understand the significance of the historical part, but what I also understand is what it means for all the issues that we’re talking about – Medicaid expansion, health care, paying teachers what they’re worth and so on and so forth. All that matters,” he said as he walked the parade

It’s a parade he’s watched as a student and marched in as a Tallahassee politician, but this time the energy was amped up now that he’s one step away from being governor.

“I feel like I’m home,” he said. “I think they own this campaign, and that’s what I want them to know.”

He’s also learned some lessons from past parades. Before he began walking he had advice for his team.

“You know the deal with the candy,” he said. “By the time you get to the center, if you’re out, you get booed.”