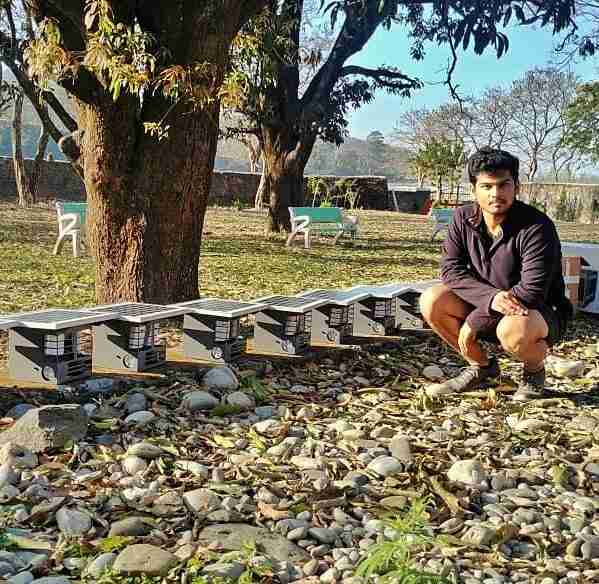 Data from other states is not available, but animal and human conflict is on the rise across India, say, experts.

Two wildlife enthusiasts in their early 20s are trying to solve this problem through an indigenous device that is getting global recognition.

Abhay and Smratika Sharma, siblings and wildlife enthusiasts, were appalled to know how farmers in one of the villages near Jim Corbett Park, a wildlife sanctuary in the northern state of Uttarakhand, had injured an elephant who tried to intrude into farmlands back in 2016.

They found that in villages near the forest areas, elephants and wild boars were causing large-scale damage to crops. Many farmers had to switch from high-value crops like pulses to low-value crops like wheat and rice to minimize loss. Many had even quit farming.

To minimize the conflict, the Sharma siblings developed an indigenous device called Animal Intrusion Detection and Repellent System, or ANIDERS.

The device, now patented, uses a combination of active and passive infrared sensors to detect the intrusion of animals into farms, and raises an alarm — a combination of light and sound — to keep them away.

The project started with creating a prototype for one farmer at a village in Kyari in Ramnagar division in Uttarakhand. The farmer was losing a large amount of crops due to elephant intrusions into his farm.

The device was so successful in keeping the wild animals away from the farm, that within months, there was a huge demand for the device from other farmers in the locality.

The Sharmas then came up with the idea of commercial production of ANIDERS under a start-up called Kyari, named after the village where it was first used.

“We saw some of the incidents of human and animal conflict, and felt empathetic towards the animals,” said Abhay Sharma, co-founder, Kyari.

“Installing our device will result in a win-win situation for both farmers and animals. The animal should be allowed to run away without being injured.”

Last year, the start-up got incubated at the Indian Council for Agriculture Research (ICAR), the apex body for agriculture research in India, with a grant of Rs 25 lakh ($34 thousand).

Even in the incubation stage, the device is getting global attention. So far, Kyari has sold about 800 devices, including sales in countries like Botswana, Malaysia and Bhutan.

The tipping point was, however, the recognition of the device from the World Wildlife Fund (WWF) in 2017.

As a part of a pilot project by WWF, two ANIDERS devices were installed at farms in Mankanthpur at Uttarakhand.

“A 100 percent success rate has been reported in reducing elephant raids. The reported number of incidents in a year were as high as 30-40 (around 15-20 per crop season), which has now dropped down to five or six,” according to the findings of WWF.

Kyari is now working with WWF to develop camera traps or surveillance cameras for animals in forests. Almost all the cameras for the purpose are presently imported from the US.

Last year, the start-up made devices for Cisco, the US-based tech giant, for monitoring animal movement on the Delhi-Jaipur highway.

While the base model of ANIDERS costs around Rs 12,000 ($163), the high-end models cost around Rs 60,000 ($815). The device now also comes with real-time monitoring linked with mobile devices and web applications.

About eight months ago, Gramya Vikash Manch, a non-profit organization based in Assam, where elephant raid in farms is a chronic problem, bought 10 ANIDERSs, according to  Dibakar Deka, secretary, Gramya Vikas Macha,

Recently, the organization bought another 70 devices, which could ward off herds of 300-400 elephants from farms.

“The initial installations were very successful in the Baksa district of Assam,” said Deka.

“Many people had quit farming due to the attack of elephants. There is a good demand for the device among the  farmers.”

Other states, where the device is being used, include Sikkim, Assam, Bihar, Karnataka and Uttar Pradesh.

Increasing deforestation leading to fragmentation of forest areas is the reason behind this increasing human and animal conflict in India.

“In the Southern states, crops like maize, groundnut, and horticulture products are the most affected due to this,” he said.

In North Bengal, in eastern India, elephants often intrude into farms, especially in the tea gardens. Apart from elephants, leopards are increasingly being spotted in tea gardens.

“Earlier, there were stretches of continuous forest areas in the Dooars-Terai region (a part of North Bengal), which have now become fragmented,” said Animesh Bose, program coordinator, Nature and Adventure Foundation in Siliguri, West Bengal.

“Today we hardly have any continuous jungle for more than 8-10 km (4-6 miles). The indigenous tribal population maintained a friendly relationship with animals like elephants. Increasingly, people from outside are settling in the region and they mostly have hostile relationships with the animals. The problem is increasing day-by-day.”