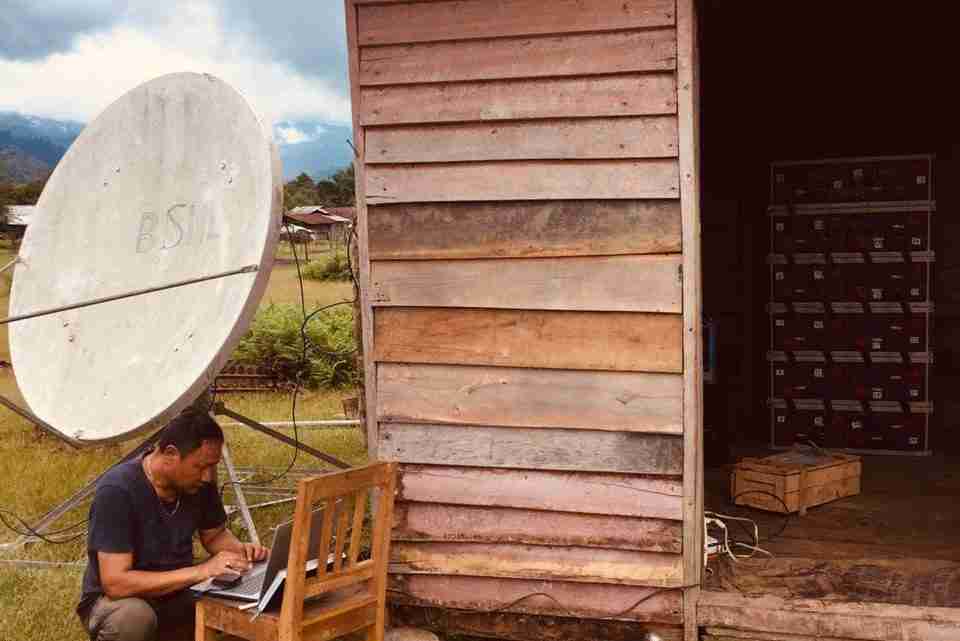 When Samir Thapa traveled to Jagun in Assam earlier this month, a six-day trek and a short bus ride from his home in the Vijay Nagar circle, he headed straight to a mobile phone store and bought a smartphone.

Since the Vijay Nagar circle, India’s remote, easternmost inhabited area in Changlang district of Arunachal Pradesh, got mobile phone connectivity on Aug. 1, Thapa’s first stop was to buy a phone.

The network tower that provides the service link was installed by a team of technicians and workers from the state-run Bharat Sanchar Nigam Ltd. (BSNL). The service works for a few hours every day, mostly in the evening, providing 2G connectivity.

“When the sun is out, we get the tower (network) in the day, too,” said Thapa, who has a small farm in Mazgaon, one of the 14 villages in the Vijay Nagar circle. “It is not like in cities where you can call anyone at any time.”

“It (power) is in short supply, and the same power is used to light up the houses,” said K. V. Newar, who works with the local power department in Vijay Nagar.

He bought a smartphone several years ago but could only use it to watch videos.

“Now I speak to my daughters whenever they can connect to my phone,” Newar said.

Every day, locals like Newar anxiously wait for 6 p.m.

“It is easy to make calls when the tower starts in the evening,” he said. “Later it becomes congested and you cannot call.”

With phone connectivity being an issue for the local population, Thakuri and Pawan Prakash Singh, a government teacher, saw an opportunity and invested in expensive V-Sat connections to augment their income.

Singh said the number of locals turning up at his shop to make calls has dwindled since the new BSNL network kicked off.

With BSNL connectivity, “government-related issues are also easier to solve now,” said Devansh Yadav, the Deputy Commissioner of Changlang. He said it is easier for locals to access government services.

The BSNL network tower, however, is just one small step to connect Vijay Nagar to the mainstream.

The state government faces a mammoth task in completing the 157 km (97.5-mile) road to connect Miao to Vijay Nagar, ending its isolation. As of now, only a 40 km (25-mile) stretch is usable.

“We plan to complete it by 2021 as per our target,” said Yadav. “We will also expand the solar power setup so that mobile phone connectivity is available round the clock.”

Thapa and Newar are descendants of families that settled in the area in the 1960s. Over 200 such families of the Assam Rifles, an Indian paramilitary force, were settled by the government in Vijay Nagar. They joined the few families of the Yupin community who lived there.

This remote borderland surrounded by Myanmar and the evergreen rainforest of the Namdapha National Park is cut off from the rest of the country. The closest town is Miao, 157 km away.

“There was a road in the 1970s and vehicles could go up to Vijay Nagar,” said Yadav. But over the years, the road disappeared into the jungle.

In September 2019, with India’s strategic interests in mind, the Indian Air Force inaugurated its resurfaced runway in Vijay Nagar to help security forces conduct operations and to aid air connectivity.

“Every Monday and Thursday there is a helicopter service,” said Yadav. “There are Air Force helicopters available when there is a need.”

Several families have left Vijay Nagar over the decades because of connectivity issues and the difficult life there.

Movement of essential items happens through helicopters. But it is not enough according to locals, and the movement of helicopters is contingent on the weather.

“We often walk to Miao to get rations,” said Singh. He is originally from Bihar but has been living in Vijay Nagar since 2011.

The locals travel in groups and camp on the way.

“It’s easier that way. One can carry rice, the other one can carry utensils. It’s a long route,” said Singh.