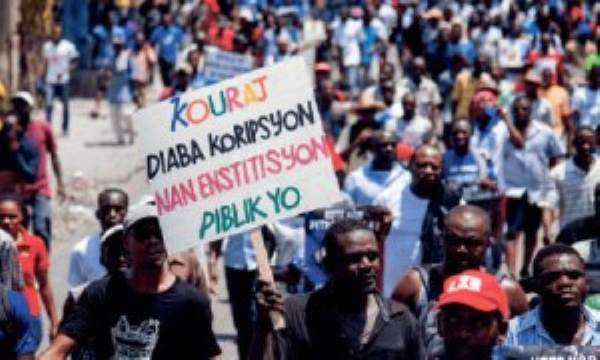 Miami — Haiti is at a standstill. For several weeks now, millions have taken to the streets asking for change, accountability, and a stop to massacres and human rights abuses, especially violence against women including sexual violence. Today, local Haitians are joining voices with thousands in Haiti, Canada, New York, and others to say with a loud voice: We stand with the Haitian People. We stand for change!

Haiti is in the midst of an escalating political crisis that has paralyzed the nation. Ongoing massacres, daily killings/disappearances of protesters and journalists must stop said Marleine Bastien, Executive Director of Family Action Network Movement (FANM) stated.

“In time of upheaval and conflict women suffer most. Bastien stated. “We protest the recent cases of rape perpetrated against women and girls. We demand a full investigation to ensure that those responsible are brought to justice. The silence of the world in the face of the grave human abuses that are occurring in Haïti is deafening. We demand accountability and justice.”

Family Action Network Movement (FANM) formerly known as Fanm Ayisyen Nan Miyami, Inc)/ Haitian Women of Miami is a private not-for-proﬁt organization dedicated to the social, economic, ﬁnancial and political empowerment of low to moderate-income families….to give them the tools to transform their communities.