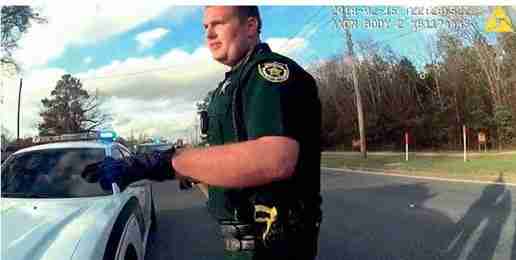 MARIANNA, Fla. (AP) – They were heading down the back roads of Jackson County in their beat-up old Camry when they passed a Sheriff’s Office patrol car coming from the other direction.

On their way to a wedding, Jeffrey Helms and his girlfriend April Middleton watched from rear view mirrors as the deputy turned around and accelerated behind them with lights flashing.

When the deputy got out of his car, Middleton recognized him instantly from her days waiting tables in Marianna. It was Zachary Wester, a 26-yearold Jackson County deputy who happened to come from a prominent law enforcement family.

Middleton and Helms weren’t too worried. They’d had run-ins with the law over drugs before, but they knew they didn’t have anything on them at the time. There were scales in the car, but nothing more, she said.

They pulled over in someone’s driveway. Wester ordered them to get out of the car and onto the ground. It was the afternoon of Sept. 23, 2017. A small crowd of onlookers began to gather and gawk.

Wester said he smelled marijuana, which gave him probable cause to search the car without consent. After rifling around in the front and back seats, he went to his own vehicle for a few moments before coming back to search their car again.

Not long after that, he held up a clear film canister he claimed he found under the driver’s seat.

The crystal substance from the baggie tested positive for methamphetamine and weighed more than three grams. Wester handcuffed Middleton and Helms and put them both in the back of his patrol car.

After complaints about Wester surfaced in courthouse circles, the Florida Department of Law Enforcement opened an investigation Aug. 1. The probe is ongoing, and no charges have been filed. Prosecutors have said they’re waiting for a final report from FDLE.

The allegations are that Wester was pulling over drivers – some with records, many unable to afford their own lawyers and planting drugs in their cars before hauling them to jail. A number of the encounters were captured on Wester’s own body camera, but it’s unclear how many.

As the investigation unfolded, FDLE investigators briefed State Attorney Glenn Hess of the 14th Judicial Circuit. He was shown body camera footage in which Wester can be seen holding what appears to be a baggie in his hand before starting a search.

“I saw a video and I saw still photographs that caused me to do a whole lot of things that state attorneys usually don’t do,” Hess said in an interview with the Tallahassee Democrat.

Over recent days, a torrent of motions filed by Hess and Public Defender Mark Sims have been filed in Jackson Circuit Court. Charges have been dropped in at least 48 cases that were initiated by Wester or hinged on his testimony.

A Jackson County judge ordered sentences vacated for at least eight people locked up in prisons and other state correctional facilities across North Florida.

He demanded at least five be returned to Jackson County and released immediately. In all, some 263 cases spanning a two-year period are under review, Hess said.

Betsy White, a noted civil rights and criminal defense attorney from Jacksonville, said Wester could face charges from official misconduct, a third-degree felony, to perjury, drug possession and even conspiracy if more people were involved. Under any scenario, if he’s charged and convicted, he could face substantial time, she said.