John Conyers: The portrait of a Dean 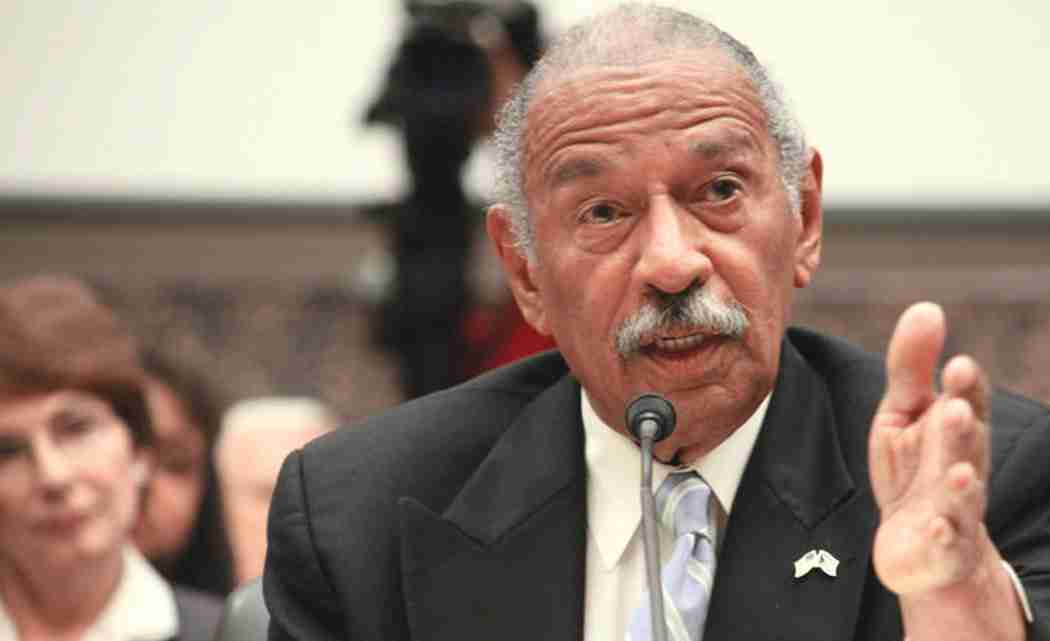 These remarks are from Attorney General Eric Holder on the occasion of John Conyers’ elevation to Dean of the House of Representatives.

WASHINGTON, D.C. —    Good afternoon and thank you all for being here.  It’s a pleasure to be with you today.  And it’s a tremendous privilege to join so many distinguished guests, colleagues, friends, and Members of Congress as we recognize Congressman [John] Conyers, the Dean of the House of Representatives, for his lifetime of dedicated service; as we celebrate his leadership and his many invaluable contributions; and as we unveil the portrait that will adorn the walls of the great institution he has so faithfully served for over four decades – and that he will no doubt continue to serve with honor and integrity for years to come.

From the moment John Conyers began his patriotic service – in the Michigan National Guard and the United States Army Corps of Engineers during the Korean War – to his presence in Selma, Alabama, on Freedom Day in 1963; from his election to the United States House of Representatives in 1964, to his chairmanship of the Judiciary Committee, to his current status as Dean of the House and longest-serving Member of the United States Congress – this extraordinary leader’s life has been defined by a singular drive to serve.  His actions have been guided by a deep and abiding love of country and community.  And his service has been animated by an unwavering commitment to the cause of justice.

As one of the 13 founding members of the Congressional Black Caucus, Representative Conyers helped bring together other trailblazers and pioneers in order to empower – and give voice to – people of color throughout the nation.

Years ago, he led the fight to secure appropriate recognition for the Reverend Dr. Martin Luther King, Jr. by introducing legislation to establish a national holiday in his honor.  And at every stage of his distinguished career – through times of trial and great consequence – he has dedicated himself to advancing the principles of universal human dignity, tolerance, and respect.

As a major proponent of the Violence Against Women Act of 1994, he joined with then-Senator Joe Biden and other Congressional leaders to bring help and hope to millions of Americans who had too long suffered in silence – fighting to end the poisonous notion that violence in a person’s home was a private affair.

As a champion of legislative efforts like the Motor Voter Bill of 1993 and the Help America Vote Act of 2002, he has consistently worked to ensure that every eligible American will always have fair and free access to the ballot box – no matter who they are, what they look like, or where they live.  He continued that work in the 113th Congress with Representative Sensenbrenner, another strong leader and former Chairman of this Committee, in crafting legislation to address the void that was left by the Supreme Court’s unfortunate decision to invalidate one of the core provisions of the Voting Rights Act.

Representative Conyers has also been a key leader and partner on fairness in sentencing, from his work in passing the law that reduced the unjust disparity in sentencing for crack and powder cocaine to his recent partnership with other Members of Congress of both parties – like Bobby Scott and Raul Labrador of the Judiciary Committee – who realize that we must make common-sense changes to our federal sentencing scheme, not just for fundamental fairness but also for the sustainability of our budget.

Throughout his tenure as a member, and especially as Chairman, of the U.S. House Committee on the Judiciary, he has been a key national leader – and a vital partner – in the Justice Department’s ongoing effort to secure our nation, to protect the American people from crime, and to ensure the full rights and protections of our Constitution for everyone in this country.

Time and again, I – and numerous Attorneys General before me – have relied on Congressman Conyers’ sound judgment, extensive expertise, fierce advocacy, and honest counsel to strengthen the rule of law while advancing our most sacred principles and most cherished freedoms.

I have always appreciated the unique insight, the remarkable wisdom, and the consistent devotion to service that he has brought to every challenge that has come before him.

And on a personal level, over the years, I have also come to regard Congressman Conyers not only as an important partner, and a valued friend, but also as a man who made it possible for me and Barack Obama to attain the positions we now hold.  We stand on Congressman Conyers’ broad shoulders.

Congressman, I want to thank you – once again – for your outstanding service, and for the innumerable contributions that you have made to the nation, and on behalf of the citizens we are honored to serve.  Your unique place in the history of this great institution is more than assured.  And today, with the formal dedication of this portrait, we pay fitting tribute to a legacy, and a shining example, that will continue to guide and inspire generations of lawmakers, in this new Congress and long into the future – just as it has inspired countless leaders and Attorneys General over the last four decades, including me.

At this time, it is my distinct honor to introduce another of these leaders – who knows firsthand the challenges of chairing a Judiciary Committee.

Ladies and gentlemen, please join me in welcoming a longtime friend of the man we’ve gathered to honor; a lifelong champion of the cause of justice; and a singular advocate for equal rights and equal opportunity – the Vice President of the United States, Joe Biden.