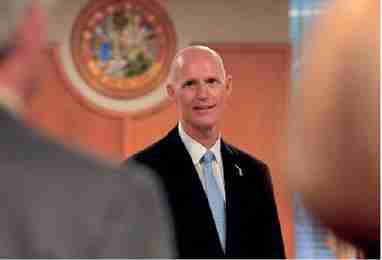 TALLAHASSEE, Fla. (AP) – John Oliver of HBO’s “Last Week Tonight” urged Florida viewers to support a proposed constitutional amendment that would restore the voting rights of most felons who have completed their sentences, and in doing so, lampooned two other people sharing the ballot: Gov. Rick Scott, who’s running for U.S. Senate, and Chief Financial Officer Jimmy Patronis.

Scott and the three-member independently elected Cabinet can restore felon voting rights, but the process is slow and there are more than a million Floridians whose voting rights have been taken away.

His predecessor, Gov. Charlie Crist, set up a process for automatic restoration of voting rights, but Scott reversed it as one of his first actions after taking office in 2011.

Oliver called the process under Scott “absolutely insane,” particularly when most states automatically restore voting rights once felons complete their sentences. The Florida amendment would make exceptions for murders and people who commit violent sex crimes.

In the 13-minute segment, the comedian called out Scott for repeatedly saying that the decision to restore rights is arbitrary, showing video of him saying, “There’s absolutely no standards, so we can make any decisions we want.”