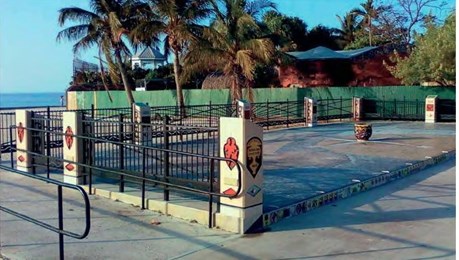 The 2019 annual Key West Community Observance of the International Day of Remembrance of the Victims of Slavery and the Transatlantic Slave Trade will take place on Sunday, March 24, 4 – 6 p.m., at the Key West African Cemetery, 1074-1094 Atlantic Blvd., in Key West.

Admission is free and the organizers welcome all to participate. Spiritual leaders and musicians are especially invited.

The observance is global, recognized by people in many countries. The United Nations international observance was designated in 2007 to be held on 25 March every year, in commemoration of the hard-won legal abolition of the “slave trade” – although not yet of slavery itself – by Great Britain on March 25, 1807, and by the United States that same year, to take effect in 1808.

In Key West, those International Days (there is also August 23, the International Day for the Remembrance of the Slave Trade and its Abolition) are observed on the Sunday closest to the official dates, to maximize community participation.

The site is the burial place of 295 Africans, mostly children and youths, of of a total of 1,432 captives rescued from three American-owned slave ships bound for Cuba, but captured by the U.S. Navy and brought to Key West, in 1860. During the 12 weeks of their detention here, 295 of their number died of the suffering they had endured during the ocean crossing, and were buried in wooden coffins carried to the site in nearly daily processions by their surviving fellow refugees.

Additionally, for more than 400 years, “more than 15 million men, women and children were the victims of the tragic transatlantic slave trade, one of the darkest chapters in human history,” according to the United Nations.

“Every year on 25 March, the International Day of Remembrance of the Victims of Slavery and the Transatlantic Slave Trade offers the opportunity to honor and remember those who suffered and died at the hands of the brutal slavery system. The International Day also aims to raise awareness about the dangers of racism and prejudice today.”

Organizers note that this year’s observance takes on added significance being the 400th anniversary year of the 1619 arrival of the first “20 and odd” captive Africans in British-occupied native North America, aboard the ship “White Lion,” at Point Comfort (today’s Fort Monroe, in Hampton, Va.).

Organizers also describe the occasion as providing a time to reflect on this aspect of our national beginnings from fresh perspectives.