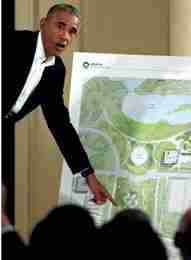 OBAMA CENTER CHALLENGED: President Barack Obama’s proposed center in the Jackson Park area of Chicago is the subject of a lawsuit.

CHICAGO (AP) — Public park advocates have filed a lawsuit against the city of Chicago seeking to stop construction of the Obama Presidential Center.

The Chicago Sun-Times reports the federal lawsuit by Protect Our Parks Inc. seeks a court order barring the Chicago Park District and other city agencies from approving the building of former President Barack Obama’s center in Jackson Park. The group also wants to bar the city from giving control of the center’s site to the Obama Foundation.

The lawsuit says the original plan was to transfer public park land to the foundation for the purpose of housing an official federal Obama library, but that now the center will not include Obama’s official presidential library.

A spokesman for Mayor Rahm Emanuel says the center is an opportunity to invest millions of dollars on Chicago’s South Side.

Next post Three Black doctors detail their journey to success