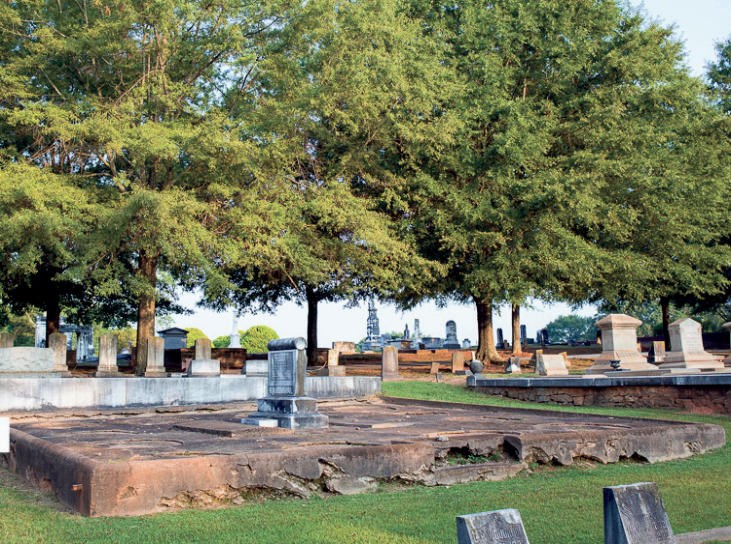 NEWNAN, Ga. (AP) – Black community leaders are calling on officials in a city south of Atlanta to preserve a cemetery for African Americans that they say has long been neglected and is under threat from a city skate park. Crews building the adjacent park in Newnan have dumped debris on the burial site, desecrating an important legacy of the city’s Black residents, community leaders say. The site is believed to contain the remains of slaves, and locals worry additional construction around the site may follow.

“This is our history. This is our heritage, and we have to preserve it,” Render Godfrey, a Black pastor who lives in Newnan, said Monday. “There are citizens like me that still live here that care about this cemetery because my heritage is laying in one of these graves.”

Godfrey and other organizers gathered at the roughly 4-acre (1.6 hectare), wooded burial site. There are no visible grave markers, but Ayisat Idris-Hosch, another organizer, pointed out depressions in the ground where she said people were buried. The site is believed to contain more than 200 graves and date back to at least the early 19th century.

Construction equipment working on the adjacent skate park could be heard in the background.

The city said in a statement it had held numerous public meetings about the skate park project and remained “committed and open to receiving feedback from residents regarding the city’s redevelopment projects.”

Godfrey and Idris-Hosch said Newnan officials had not reached out to leaders in the Black community to get its feedback. Black people make up about a third of the roughly 40,000 residents in Newnan, which lies about 40 miles (64km) southwest of Atlanta.

Godfrey and Idris-Hosch marched with about a dozen other people later to the historic Coweta County Courthouse, where they rallied with signs that read, “Don’t Dump on Our Ancestors” and “This Disrespect Would Never Happen in Oak Hill.” The nearby Oak Hill Cemetery contains the graves of Confederate soldiers and is well-manicured and marked.

“We cannot allow our legacy to be forgotten, to be dumped on and to be disrespected,” Idris-Hosch, president of Newnan’s African American Alliance, said at the rally.

The city has made improvements to a museum next to the African American burial site and planted flowers on the property, spokesperson Ashley Copeland said in an email. She said no one from the city was available for a phone interview.

Lillie Smith, another member of the African American Alliance, said the city has invested much more money in other historic sites. She wants it to beautify and clearly designate the Black cemetery.

“We’re not here to blame anybody for anything. We’re not looking for apologies,” she said. “We want the cemetery to be a place where people drive by and say, ‘That’s an enslaved African American cemetery.”’