Liberians exiled by Ebola pray for end of outbreak 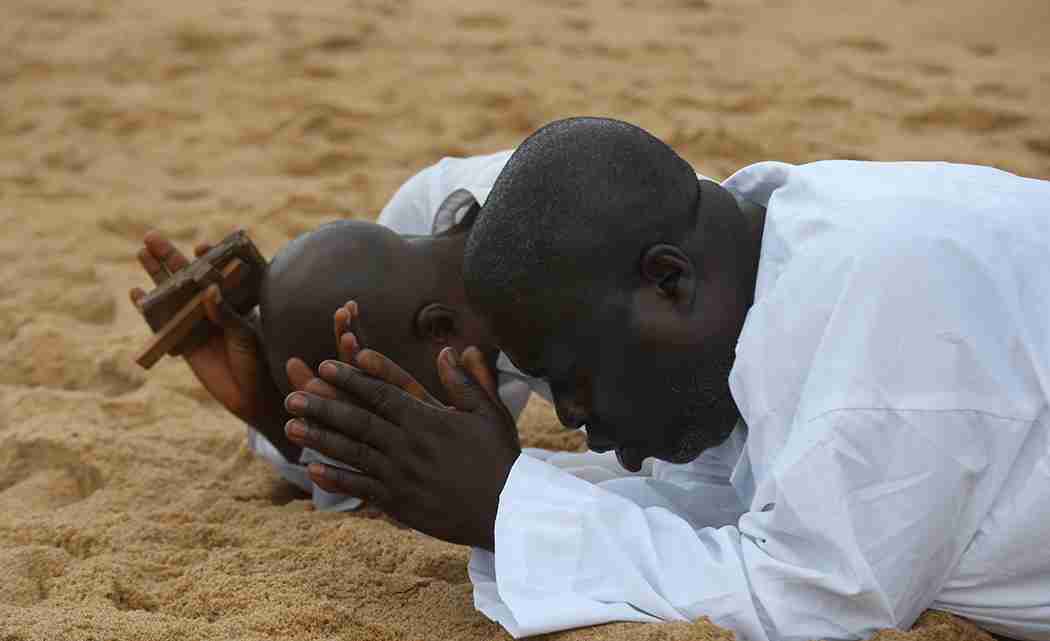 BUDUBURAM CAMP, Ghana (AP) — Henry Boley left Liberia to attend a conference in Nigeria just days after his twins were born. Now, weeks later, he can’t get home. Amanda Johnson, a 50-year-old Liberian living in Ghana, awaits her fiance’s departure from their home country for their wedding, but refuses to return home because of Ebola.

Hundreds of Liberians are stranded in Ghana, separated from their families because of poverty, fear and logistics. Some are waiting for flights to resume after most airlines cancelled flights to Liberia. Others are having trouble navigating or affording the circuitous route back by bus. Many others feel it’s too risky to return home, even if their spouses or children are desperately urging them to.

Boley and Johnson are neighbors in a camp for refugees just outside Accra, the Ghanaian capital, where they monitor the news for any signs that Ebola is slowing down in their home country. Their exile is likely to continue as the worst outbreak of the disease in history continues infecting more people in Liberia, Guinea and Sierra Leone, with a total death toll of more than 4,500.

Ghana, which is still free of Ebola, has become the hub for an intensified international response to the crisis, with the U.N. Mission for Ebola Emergency Response based in Accra. Ghana is one of 14 West African counties seen as being at risk, and authorities have set up at least three Ebola isolation centers across the country in case there is an outbreak.

Boley, a 40-year-old Christian pastor, has been stranded for weeks. He is bored and often thinks of his babies, whom he barely knows.

“I have been trying to get back to Liberia but it’s very difficult,” he said. “This is tough for me. I am the man of the home and when I talk to my wife she says to me that I need to be there. But I can’t do anything for her.”

Boley believes more than 500 Liberians — often jobless, broke and desperate for good news out of their country — are at the Buduburam camp, an unsanitary maze of tin-roofed shacks, tents and other makeshift structures. Many more are said to be sheltering in other parts of Ghana. When he is not walking about idly, Boley sits huddled among other men who talk quietly over cold drinks. In a crowded market in Buduburam’s dusty grounds, women sell fresh vegetables, bottled honey and other goods. The area stinks of rotting garbage.

Boley had flown to Nigeria on Gambia Bird, but after he left that airline stopped flying to Liberia. While in Lagos, Nigeria, people avoided him after learning he was from Liberia, he said. Disinvited from the conference, he took a bus to Ghana, where border officials announced there was a possibly Ebola-infected Liberian in their company. People panicked, he said.

The only way he can return home is by taking another long bus trip through four countries, including Guinea and Sierra Leone. It would cost him at least $350, money he doesn’t have. The most direct route, through Ivory Coast, is closed, and French-speaking Ivorian border officials are hostile toward Liberians, he said.

A shuttered kiosk in the middle of the camp is a reminder of the stigma of Ebola: The Liberian man who used to run it, some said, was ignored and left to die in hospital because his doctors suspected Ebola was the reason for his high fever. Police also come to the camp at night in search of Ebola patients, residents said.

Johnson is awaiting her fiance’s arrival in Ghana for a wedding at the end of the year. But he can’t leave Liberia because of border closings.

“Some people are saying we will get married in December, others are saying maybe three years later. I just don’t know what will happen,” said Johnson, who runs a stall selling clothes and food in the camp. “I also can’t go back to Liberia. I don’t want to go.”

Liberians are deeply religious people, and every morning many who live in this camp crowd into a church to pray for the end of Ebola

Boley, the Liberian pastor, said he genuinely believes that “only God can help us to solve” Ebola.

Previous post 4 Hobbies That Could Downgrade Your Credit Score