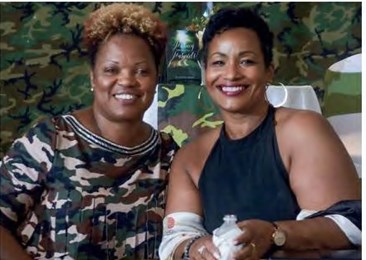 BOYNTON BEACH, Fla. – When Minister Genine Patterson-Rumph broke the glass ceiling in 2017 by becoming the ﬁrst licensed female minister on staff at St. John Missionary Baptist Church in Boynton Beach, few people were particularly shocked because of her dedication to the church and to ministry in general. They say it was her steadfast faith and her willingness to stay the course, which has been so profound over the years, resulting in the groundbreaking feat.

So when Senior Pastor Jovan Davis appointed her as the ﬁrst female minister in the church’s (then) 109 year history, he said it was a natural progression in her longstanding service in the church and her unyielding faithfulness.

Now, Rumph has riveted parishioners and the public with her very personal memoirs chronicling abuse and hardships she suffered quietly over the years. It’s all detailed in her new book, Journey through the Journals, in which she shared excerpts at a book signing with her editor, Tresa Chambers, last weekend at the popular Palm Beach County church.

Rumph’s account of abusive relationships, giving birth out of wedlock and enduring a long-term mysterious illness was raw and startling to the unsuspecting reader, but hers is equally a book of inspiration and hope for others who have endured similar circumstances. The fact that she overcame and has emerged as a trailblazing woman of God should provide people everywhere hope in God, says Pastor Davis, who wrote the foreword for the book –for which he says he felt honored.

“I hope the reader would take the opportunity to really grasp the message of her book and allow it to inspire them on their own personal journey. I challenge the reader to be just as transparent so that they may be transformed,” said Davis. “The things she’s gone through and overcome should provide inspiration to many.”

Rumph tells of the abuse she suffered in various relationships, even driving to work and wearing sunglasses to hide the physical scars.

But despite the obstacles she says she realized God was apparently preparing her to persevere and have faith to remove mountains.

The previous pastor of the church, Rev. Lance Chaney, stopped her in the halls of the church years ago and gave her a prophetic word from the Lord. He told her that God was going to use her as a trailblazer for women. She couldn’t imagine that because she was shy and reserved during those days. And although it didn’t come to pass under his tenure at St. John, it did indeed come to pass when she broke barriers by becoming the ﬁrst female minister on staff in the church’s history. It was after Chaney passed away and Davis took the helm at the prestigious church, that Davis, too noticed her dedication and tenacity –and years after the initial prophetic word, Davis appointed her to the ministerial staff making her a trailblazer in the church, just as Chaney had prophesied years before.

Her book began to take form a couple years ago after she’d been journaling for some time, chronicling nearly every aspect of her life, both the good and the bad. Her husband, J. Michael Rumph, whom she calls her gift from God, says his wife writes down everything. “She writes everything. I’m not surprised she put her experiences in a book. I think it’s great!”

Her editor, whom she met in a chance encounter, edited the book. The two ladies delved into the most poignant parts of the book at the book signing, with Chambers asking the tough questions of Rumph. At times, Rumph appeared to be preaching as she explained the most personal segments of the book. The audience cheered with loud applause. Her husband was not surprised at the reaction because he says the book is clearly therapeutic for his wife, and it was sure to be inspiring to others once they heard excerpts from the book. “I think it’s very therapeutic for her and how she’s overcome the adversities in her life. It’s very inspirational to others. It might inspire people to journal and write diaries again, he said. “I’m very proud and elated that she took the time to do this because it wasn’t easy,” he said. “I hope people will ﬁnd the book helpful, educational and inspiring. I hope it will be fruitful in their lives as well,” he said.

Minister Rumph also got some amazing star power in connection with the book. Longtime gospel great, Pastor Beverly Crawford, the legendary gospel singer, says Rumph’s personal story and testimony blew her away. They met a few years ago when Crawford spoke at the church. “We connected and have been friends ever since. There’s a spiritual connection between she and I,” Crawford said. “Now the world can hear about her testimony and all she’s done. I just want people to hold her arms up and support her. From hearing her story your life will never be the same,” said Crawford, who wrote a review on the book. Crawford said she would’ve surely attended the book signing but she was in the midst of her women’s conference at thechurch that she and her husband Todd Crawford, pastor. In addition to her musical career, Crawford and her husband co-pastor the Gainesville Family Worship Center in Gainesville, Florida. “I’m in great support of her book,” said Crawford.

The mayor of Boynton Beach, Steven B. Grant, attended the book signing and said he was excited to purchase and read Rumph’s book.

St. John Missionary Baptist Church will hold its 111th Church Anniversary September 18-22 at the church, located at 900 N. Seacrest Blvd, Boynton Beach, Florida. Services will be held Wednesday through Friday at 7pm and again Sunday morning, September 22nd at 10 am.

Journey through the Journals by Genine Patterson- Rumph is available now at: www.journeythroughthejournals.com. It will soon be available on Amazon and Barnes and Noble.